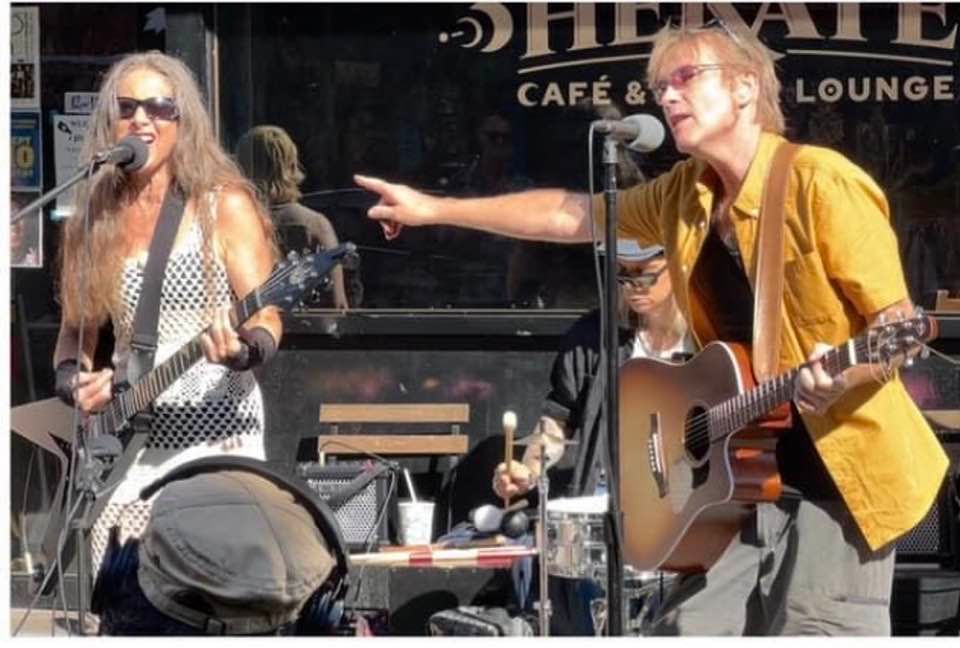 Elizabeth Ruf and Karl Bateman, with Eric Blitz on drums, performed songs from their new album on Avenue B last month. (Photo by Hal Shaw)

Head Peddlers take it to the street for new album release

BY RACHEL de ARAGON | In the cauldron of ideas, images and sounds that translates into art, New York’s Lower East Side continues to deliver a punch that is uniquely eclectic and uniquely urban.

The Head Peddlers — Elizabeth Ruf and Karl Bateman — released their debut album, “Big Mohair Sweater,” on Aug. 14. On a sunny Sunday afternoon, on the “Open Street” in front of the intriguing Hekate Cafe and Elexir Lounge, at 11th Street and Avenue B, they gave a lively taste of the album’s contents. For the live peerformance they were joined by Eric Blitz on drums, Steve Harsh on bass, Laura Thomas and Jenn Gonzalez-Blitz on vocals.

Using the mellow tones of acoustic guitar within the context of a punk-rock genre, the Head Peddlers revive a tradition that reaches back into the late 1960s when the Velvet Underground broke the rules and laid the groundwork for much of the music that would come out of the New York scene in the years that followed.

The multitalented Elizabeth Ruf has the easy-to-listen-to voice of a balladeer, which she has centered within the hard-beat insistence of Bateman’s rhythms and the sensual complaint of the electic guitar.

The Head Peddlers shout out stories that want to be told. Wrapped in our isolated, lost year of 2020, caught in our small apartments with our friends and lovers and pets, we in a city of 8 million wondered where everyone went.

Listening to Ruf and Batemen belt out the expeience of now, I felt that we had finally escaped our captivity and were back on the street. The crowd of Baby Boomers, Millenials and Gen X and Z all were celebrating the energy. The stories are those of New York in the years of COVID lockdowns and gentrification.

With a sense of humor and of social urgency, The Head Peddlers inject a poignant energy into the music, and give us a good time!

“Big Mohair Sweater” by the Head Peddlers is accessible on a variety of Web sites. Visit theheadpeddlers.net for more information.