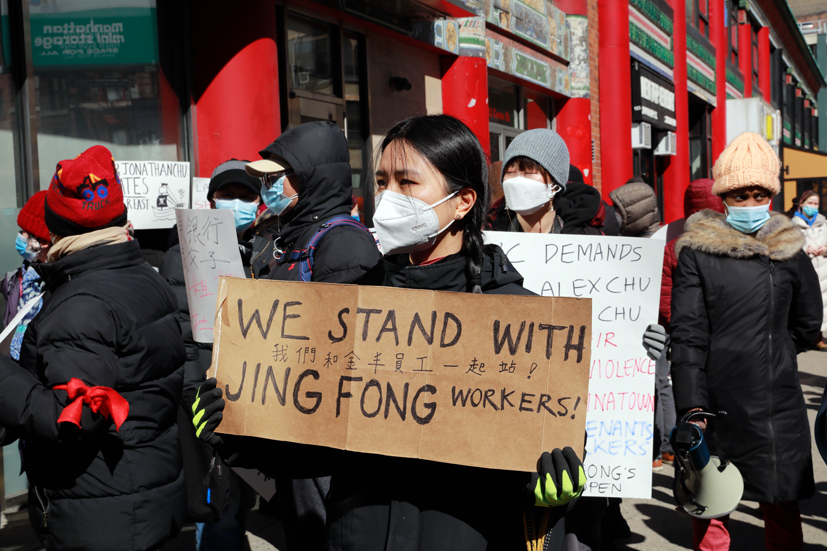 Protesters rallied on March 2 to save Jing Fong from closing. (Photo by Caitlin Kelmar)

Hard to stomach: Jing Fong is forced to close

The demonstrators, including members of Local 318 Restaurant Workers Union, gathered outside East Bank, at Canal and Centre Sts., which is owned by Alex Chu, the landlord of Jing Fong, at 20 Elizabeth St.

Jing Fong had announced it would be closing its dining room on Sun., March 7, but only because Chu was not giving them an option to stay.

“It is unfathomable that the landlord would choose to evict Jing Fong, the anchor business and main engine of the Chinatown economy, when Chinatown has suffered disproportionately
due to the discrimination associated with the COVID-19 pandemic,” the protesters said in a press release. “The landlord should be working with the union and employer to avoid the closure of the iconic restaurant that draws over 10,000 patrons a week during a typical year, and employs over 150 staff, 70 of which are good union jobs!”

The union demanded that Chu commit to keeping the restaurant open and sit down with Local 318 and Jing Fong to figure out how to do so.

Chris Marte, who is running for City Council in District 1, was also at the demonstration. On Monday, Caitlin Kelmar, Marte’s campaign manager, said there has been no response from Chu.

“So far we haven’t had any communication from the owners,” she said. “We’ll be meeting this week to announce next steps, though.”

Word on the street is that Chu may be eyeing the Jing Fong site for another major development project. Chu was also the landlord of the former Silver Palace, another dim sum restaurant that was adjacent to Jing Fong. Silver Palace was closed and demolished and Chu built the 20-story, 229-room Hotel 50 Bowery on the spot. Part of Hyatt’s Joie de Vivre brand, the hotel opened in 2017.