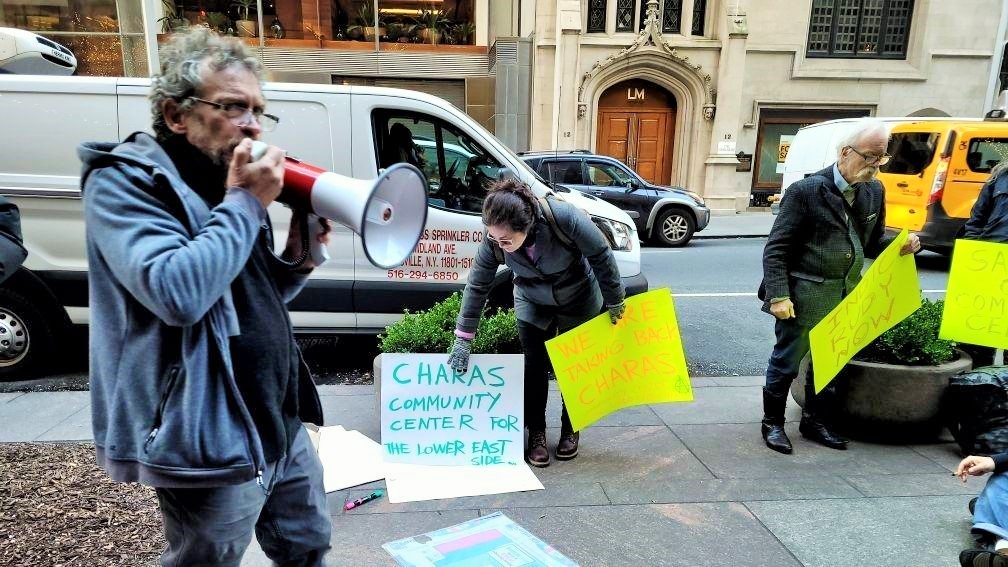 Ken Toglia spoke at the LES Guardians protest. At right, Dana Beal, a "godfather" of the pot legalization movement and also a Guardian, held an "Indict Rudy Now" sign, referring to the ex-mayor's role in ginning up the Jan. 6 Capitol riot. (Photo by duke9top)

BY THE VILLAGE SUN | The Loisaida East Side Guardians (formerly Guardians of CHARAS) took their direct-action campaign north of 14th Street on Monday, protesting outside the Midtown offices of Madison Capital Realty.

The rally’s theme was “Hey Billionaires! Give Us Back Our Community Center!”

Led by former East Village squatters Frank Morales and Ken Toglia, the Guardians say they are protecting the old P.S. 64, at 605 E. Ninth St., at Avenue B, from arson and other possible threats. The historic, through-block building, after sitting vacant under a developer’s control for more than 20 years, has slipped into foreclosure, with lender Madison Capital Realty poised to seize control of the property. However, preexisting lawsuits are reportedly slowing down the transfer of ownership.

A crowd of about 30 showed up for Monday’s protest at Madison Avenue and 53rd Street. The high-powered real estate investment firm says it specializes in “unique opportunities in innovative growth markets.”

In addition to Madison Capital, the Guardians also demonstrated at a Corcoran real estate office nearby. Corcoran bizarrely has the old school listed for sale as an 89-unit “pre-war co-op,” despite a deed restriction limiting its use to “community facilities,” such as, for example, schools, medical offices, dorms or social-service day centers.

“Over all,” Toglia said, “our message is caveat emptor. Whoever is interested in buying it needs to know they’re buying a real headache. We want Madison to open a dialogue with the city. We want Corcoran to take it off their roles. We want Rudy to apologize for selling it.

“And let’s just say we are prepared to escalate our tactics,” Toglia added. “How can people claim it’s impossible to save CHARAS by seizing it, if that’s how CHARAS was started?”

Morales previously told The Village Sun there were several times he wanted to occupy the building, including when developer Gregg Singer was evicting CHARAS. But Morales said, in the end, he always deferred to CHARAS, Inc., as well the group Save Our  Community Center CHARAS 64 (SOCCC64), both of which opposed the tactic.

Until the city auctioned the decommissioned former school in 1998, the property was home to CHARAS/El Bohio, a thriving, Puerto Rican-led cultural and community center. Singer, who purchased the building at auction for $3.12 million, evicted CHARAS — which had initially squatted it — at the end of 2001. However, faced by a united front of opposition from community activists, local politicians and City Hall, all of Singer’s plans for the building — early versions of which called for demolishing it and replacing it with a high-rise university dorm — have come to naught. Singer is currently suing the city for “tortious” (wrongful) interference.

After Monday’s protest, the Guardians went to the WABC Radio studios to do an interview, where they, ironically, just missed bumping into Rudy Giuliani. It was under the former mayor that the decision was made to auction the old P.S. 64. Morales saw Giuliani in with Curtis Sliwa, the Guardian Angels founder, who has a talk show on the station.

The Giuliani administration did not like CHARAS because the East Village group, including notably one of its co-directors — the late District Leader Armando Perez — was a bitter political foe of then-Councilmember Antonio Pagan. A Giuliani ally, Pagan eventually landed a plum job in the mayor’s administration.

Also angering Randy Mastro, one of Giuliani’s deputy mayors, CHARAS allowed Latin Kings gang members to hang out inside the city-owned building and fill out job applications, on the grounds that police were said to have been hassling them in Tompkins Square Park. The founders of CHARAS themselves were former gang members who had turned over a new leaf to embrace community empowerment.

In addition to changing the group’s name, Toglia recently said the Guardians were no longer going to refer to what he called “the CHARAS site” as CHARAS anymore but as “the future home of the East Ninth Street Community Center, or E9CC.” CHARAS, Inc., had objected to the use of the Guardians of CHARAS name and also the likeness of its executive director, Chino Garcia, in an Uncle Sam-like “Uncle Chino” poster created by a friend of Toglia’s, R.J. Kikuchiyo.

As previously reported by The Village Sun, Garcia is now accusing Morales of “taking advantage” of the double whammy of Garcia being laid up in a rehab facility while the building is simultaneously in foreclosure. SOCCC64 and the board of CHARAS, Inc., of which Garcia is the president, say the situation with negotiations to try to recover the building is very delicate and fear the Guardians will disrupt it.

For their part, Toglia and Morales say they just want to help at a critical juncture for the building, the community and Garcia and that things should not be “behind closed doors” but out in plain view, and that the full power of the community should be harnessed for the effort.