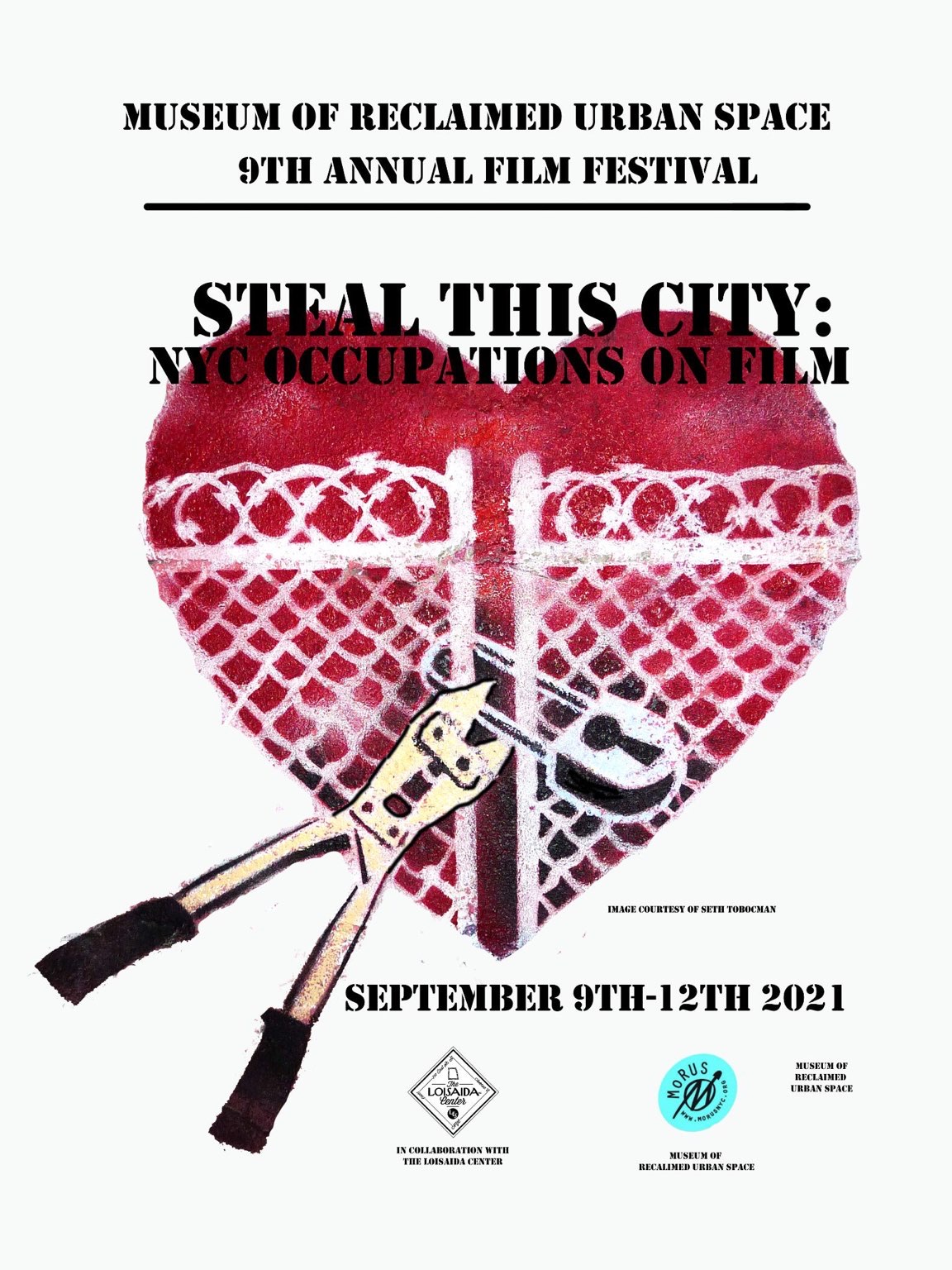 Graffiti by girls, other guerrilla art, Puerto Rican “casita culture” in gardens, squatting and more will be on the bill for a film festival hitting the East Village’s community gardens this week.

It features a variety of films — two digitized specifically for the occasion and another screened publicly only at the 2021 Tribeca Film Festival.

MoRUS (the Museum of Reclaimed Urban Space) is partnering on the festival with the Loisaida Center, with additional support from ABC No Rio. 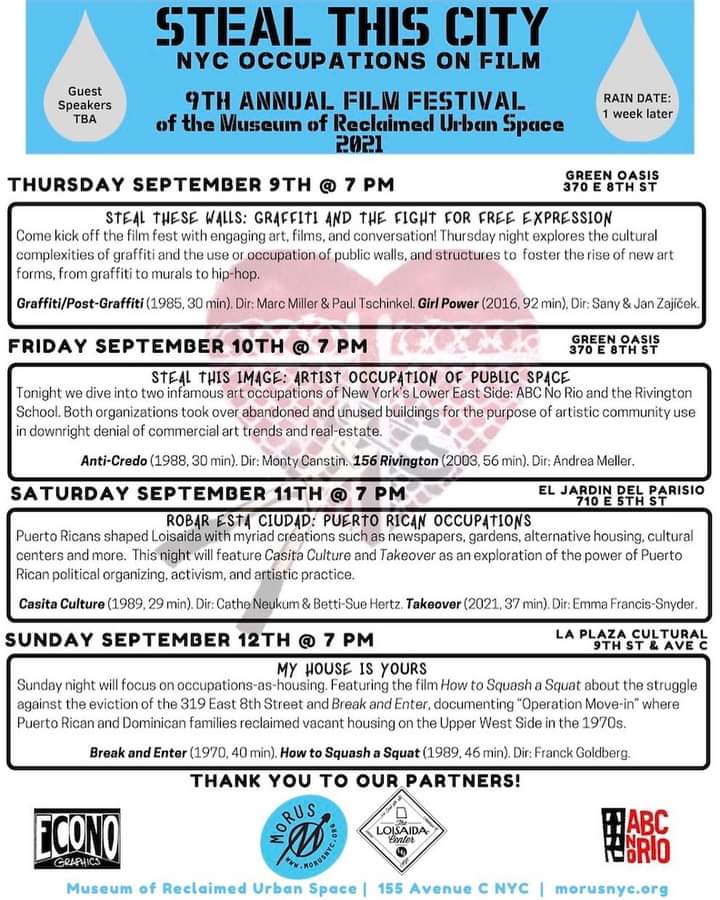 Through a curated collection of films and guest speakers, the four-day event, staged in local community gardens, “will examine how in a city where real estate dominates spatial reality, activist-driven occupations show how another world is possible.”

For films, dates and community garden locations and to reserve tickets, visit the festival’s Eventbrite page.

Although tickets are listed as $25 per night or $60 for a festival pass, Bill de Paola, the executive director of MoRUS, said the tickets are just if people want to guarantee they have a place reserved. Otherwise, he said, “it’s a sliding scale when you show up.”

This night explores the cultural complexities of graffiti and the use or occupation of public walls, spaces and structures to create a space for alternative communities and foster the rise of new art forms, from graffiti to murals to hip hop.

This documentary captures a key moment in the evolution of graffiti from illegal street art to rarified commodity exhibited in high-profile galleries.

Following female graffiti writers from 15 cities, from New York to Prague to Cape Town and all the way back to New York, the documentary illuminates their paths as they navigate this predominantly male world where men often share the view that graffiti — especially the illegal kind — is not for girls.

Friday night’s films dive into two infamous art occupations of New York’s Lower East Side: ABC No Rio and The Rivington School. Both groups took over abandoned and unused spaces for the purpose of artistic community while facing down the interests of commercial art trends and real estate.

A cine-manifesto of scrap-culture, trash esthetic and junk art, the film features The Rivington Sculpture Garden, a monstrous monument welded and assembled from bed frames, shopping carts, car doors and other urban waste by a rebellious Lower East Side artist group, the Rivington School. Without legal permission, the group transformed an empty lot into a continually mutating landscape of sculptural anarchy.

The garden served as a free place for social events, exhibitions, concerts, performances and festivals for almost three years, until it was bulldozed in the fall of 1987. The lack of restraint of Cantsin’s filmmaking adds a dramatic beauty to this rare, poetic documentary.

The film “156 Rivington” explores the cultural sensibility of the communally run art space ABC No Rio, which has, for more than 20 years, been home to an eclectic group of artists, punks, activists, anarchists and other groups mainstream America often dismisses as “fringe.”

Loisaida was a central destination of Puerto Rican immigration that shaped the neighborhood with myriad creations, including news outlets, gardens, alternative housing, cultural centers and more. Much of the Lower East Side we see today is the legacy of its Puerto Rican residents and this night of film honors that activism.

This documentary examines the roots and importance of casitas — traditionally-built “little houses” located in community gardens — to the life, cultural awareness and aesthetics of Puerto Rican residents.

“Takeover” documents the 12 historic hours on July 14, 1970, in which 50 members of the Young Lords Party stormed the dilapidated Lincoln Hospital in the South Bronx, drove out the administrative staff, barricaded entrances and windows, and made their cries for decent healthcare known to the world.  The activists raised the Puerto Rican flag atop the building, and hung a banner reading, “The People’s Hospital” — a nom de guerre still used today. This film has not been screened publicly since the 2021 Tribeca Film Festival.

The film festival’s final night will focus on the timely issue of occupations-as-housing and housing rights.

This documentary turns a lens on Operation Move In, a direct action in which Puerto Rican and Dominican families reclaimed vacant Upper West Side apartment buildings.

A portrait of the East Village that is no more, this documentary filmed in the East Village exposes the clash between squatters and police during the demolition of a burned out squat at 319 E. Eighth St.

Among the participants in “Steal This City” are activist/author Victoria Law (“Resistance Behind Bars,” PM Press 2009, “Prison by Any Other Name,” PM Press 2020, “Prisons Make Us Safer,” PM Press 2021), who will speak on Friday night to reflect upon her time as a member of ABC No Rio.

“As the daughter of immigrants growing up in Queens, I thought my only options were to be a doctor, lawyer or gangster’s girlfriend,” Law said. “ABC No Rio opened a whole new world of possible futures and changed the course of my life.”

Radical comic book artist Seth Tobocman,whose work has influenced activist movements from the squatters in the East Village to the African National Congress in South Africa, contributed the stencil art that illustrates Steal This City.

As Tobocman explained it, “The piece was originally designed for the occupation of a vacant lot to protest the large amount of vacant city-owned property that could be made into housing.”

Additional speakers for “Steal This City” are to be announced.