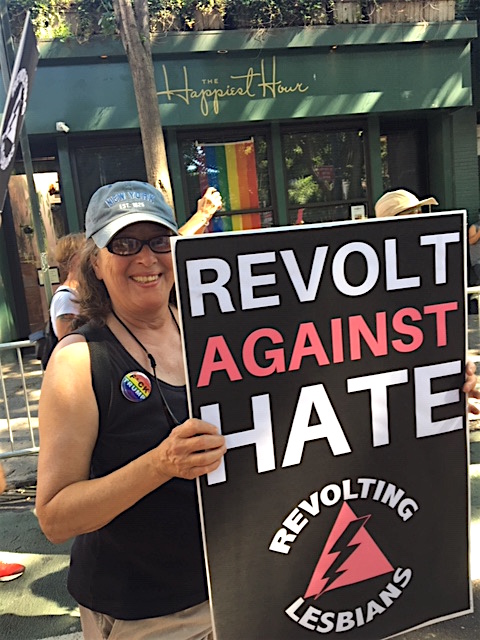 The writer in the Queer Liberation March in June 2019. (Courtesy of Kate Walter)

BY KATE WALTER | After I came out in 1975, I escaped from my conservative Catholic upbringing in New Jersey and moved to the East Village to be a dyke. Since then, I always mark the start of summer with Pride.

But this year the big NYC Pride March was canceled, for the first time since 1970. Over the decades, I was thrilled to march and protest and cheer with friends and lovers. In 45 years, I have only missed this event twice.

I can trace my queer evolution from the different contingents I joined to march with over the decades. In the ’70s, I stepped out with the feisty Lesbian Feminist Liberation.

In the ’80s, I marched with my partner as part of the Gay Teachers Association, where we met at a meeting.

In the ’90s, I went with the Gay Writers and was the group marshall.

During the moment of silence, I thought of Joe, my college boyfriend who died of AIDS.

Of course, he wasn’t my only loss. At the height of the AIDS epidemic, I protested with ACT-UP outside St. Patrick’s Cathedral. (Rest in Power, Larry Kramer.)

In the new century, I started marching with Middle Collegiate Church, which this recovering Catholic joined to get through the devastating breakup of my 26-year relationship. Reverend Jacqui Lewis, our pastor (who calls herself “the queerest straight black woman”), led our loud group. We sang to the gospel choir who rode on a colorful float.

I know I’m biased but I think NYC Pride is the best — not just because I live here — but because we get to march past the Stonewall Inn, where it all began in 1969.

Every year, the crowds roared as we headed up Christopher St. past the legendary bar, where the sidewalks were jam-packed with bystanders waving rainbow flags and slapping our hands with high fives.

The Stonewall Inn had become a powerful international symbol of celebration and mourning. It was where we came to celebrate when gay marriage was declared legal and Edie Windsor (a gay Rosa Parks) spoke to the ecstatic crowd. And it was where we came to mourn after the mass murders at the Pulse nightclub. Visitors from around the world stop here, like on a pilgrimage to gay mecca.

Last year, 2019, on the 50th anniversary of the Stonewall riots, two marches in New York City commemorated the event. The NYC Pride March went down Fifth Avenue loaded with glitzy floats from banks and phone carriers. Politicians and police officers stepped off to loud applause. More than 5 million people were on the streets for this huge celebration.

The alternative Queer Liberation March started in front of the Stonewall Inn and went up Sixth Ave. to Central Park, retracing the path of the very first one. This was a grassroots effort to reclaim Pride and return the parade to a community-based event. Corporate floats and police in uniforms were banned.

This more radical event attracted around 45,000 protestors. I attended with a group called Revolting Lesbians, organized by an N.Y.U. colleague.

Over the years, I’d become disillusioned with the commercialized parade but this new march reenergized me. I hoped both would continue — two marches in opposite directions.

I expected this year to be even more exciting since 2020 is the 50th anniversary.

As a senior gay woman living in Greenwich Village, I feel that gay elders like me are the keepers of queer history. I was upset to hear the coronavirus forced the community to cancel this annual weeklong celebration. No marches, no dances on the pier, no street fairs with vendors selling hot dogs and falafel and rainbow paraphernalia.

But then I learned the alternative march is back on for June 28, renamed the Queer Liberation March for Black Lives and Against Police Brutality. The city may be boarded up but this protest will take place. But now I was in a quandary. Should I attend? Is it too risky at my age? I’m healthy at 71 and don’t want to get infected, especially after playing it safe for three months. And I certainly don’t want to get shoved or knocked down.

In early June, Pride month began with a vigil at the Stonewall to honor queer people of color and other Black Americans lost to police violence. I wandered over but the masked crowd was densely packed. I stood across the street but didn’t linger. I couldn’t hear the speakers.

The many safe Pride activities (created after corona) sound lonely and quiet. NYC Pride is hosting an event to be broadcast on June 28.  Lambda Literary is offering a series of readings. Drag queens are doing bingo at home. DJs are holding virtual dance parties.

Will I be alone in my apartment dancing on Zoom? Having cocktails online with friends? Before the virus, I didn’t mind being single, but it’s harder with no real social life since March.

While I’m tempted, I think it’s best to stay home from big marches. Let the younger folks take up the mantle for queer lives and Black lives. I’ve done my share of protesting over the decades.

I sent donations and took a two part Anti-Racism Master Class taught by Reverend Jacqui. On June 19, Juneteenth, I attended a small Black Lives Matter prayer vigil outside Middle Collegiate Church. About 50 of us, spaced 6 feet apart, stood/sat/kneeled in silence for more than eight minutes. Then we stood up and chanted “Black Lives Matter” as cars going down Second Ave. honked in support.

On Sunday, June 28, I’ll wear my rainbow bandana as my face mask and wave my rainbow flag from my window during the 7 o’clock cheer, honoring the essential workers, especially those who are queer and people of color. And I’ll cheer for the recent landmark Supreme Court ruling that protects L.G.B.T.Q. employees in the workplace.

I may not be marching this year but my Pride remains strong.

Walter is the author of the memoir “Looking for a Kiss: A Chronicle of Downtown Heartbreak and Healing.”