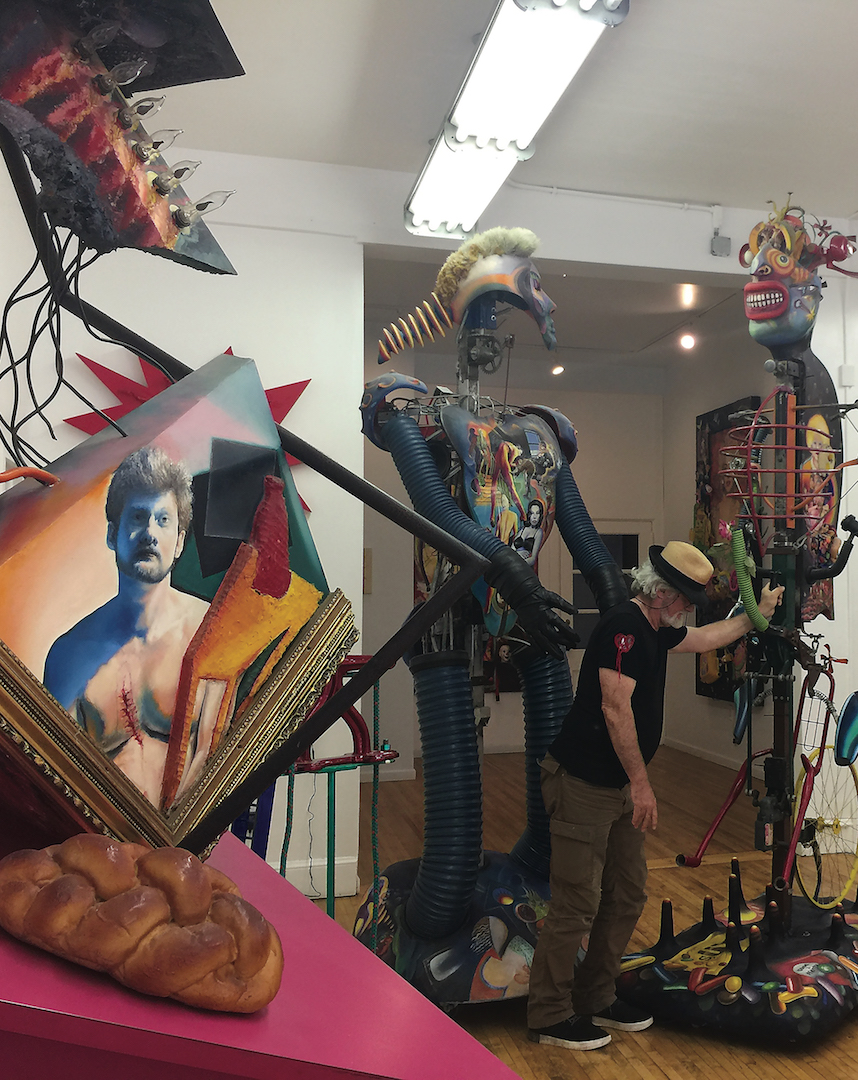 Shalom Neuman in his Fusion Arts Museum. At left is a self-portrait. (Courtesy Shalom Neuman)

BY KEITH PATCHEL | Beloved multisensory artist Shalom Neuman and his wife Karen are currently restricted to their home in Easton, Pennsylvania, where they are both recovering from the COVID-19 virus infection. We wish Shalom and Karen a speedy recovery from the pandemic.

Shalom lives and works out of his studio in Easton. He spends part of the year working in Prague, where he also maintains a home and studio.

Shalom was a participating artist in the 1980s Lower East Side art movement the Rivington School. He is also the founder of the Fusionism movement, which is dedicated to multisensory artistic expression.

He formerly ran the Shalom Gallery, on Stanton St., which presented numerous Lower East Side artists in various stages of development over the past 30 years. Fusion had a Brooklyn location, as well.

Shalom and I have collaborated on performances with the Unbearables, especially with their de facto leader, Ron Kolm, and Anthony Haden-Guest.

Shalom recently used segments of my “Pluto Symphony” in a documentary film that was broadcast March 2020 on Czech National Television describing his life and his artistic process.

Shalom Tomas Neuman was born in Prague, Czechoslovakia, in the aftermath of World War II. He is the last surviving male of a large Jewish family, most of whom perished in Nazi Germany’s Holocaust.

His family escaped from Prague’s communist regime in 1948 after his father’s name was placed on a communist death list. They immigrated to Haifa, Israel, where he spent his childhood.

When he was 12, Shalom, his sister and his parents immigrated to Pittsburgh, PA. He has lived, worked and maintained a studio on the East Coast of the United States since 1980.

He is the recipient of the Premio Galileo 2000 Award for Art XV Edition, presented at Teatro della Pergola, Florence, Italy, on Sept. 23, 2013.

He has taught at The Cooper Union, Parsons School of Design and Pratt Institute of Technology and has been a visiting lecturer at the School of Visual Arts, Yale, Academy of Fine Arts in Prague, Beer Sheva College and Ra’anana Cultural Center in Israel.