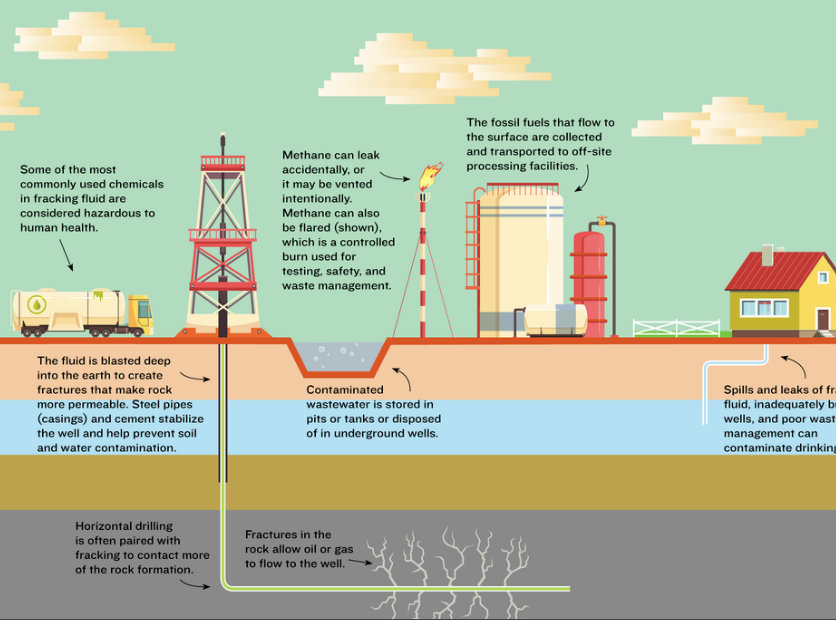 A schematic diagram of the hydrofracking process. (Courtesy NRDC)

Overshadowed by the coronavirus pandemic, in the state budget passed earlier this month, hydrofracking was permanently banned in New York State.

Governor Cuomo had announced in January that he intended to include legislation in the budget to forbid the hotly debated drilling method, which opponents charge endangers drinking water quality.

“New York’s leadership on hydraulic fracturing continues to protect the environment and public health, including the drinking water of millions of people, and we must make it permanent once and for all,” Cuomo said in January. “In the five years since fracking was banned, we have proven that it was in fact, not the only economic option for the Southern Tier. The region has since become a hotbed for clean energy and economic development investment through programs like 76West and Southern Tier Soaring, creating new good-quality jobs that pave the way for further growth.”

New York State’s Southern Tier — which is rich in oil-shale rock — runs west from the Catskill Mountains along the northern border of Pennsylvania.

The state Department of Environmental Conservation prohibited the practice in 2015, following a seven-year review process that looked at potential environmental and health impacts associated with fracking. New York’s was the first ban by a state with significant natural gas resources.

The enacted 2021 budget codifies the governor’s earlier ban on the D.E.C. approving permits that would authorize an applicant to “drill, deepen, plug back or convert wells that use high-volume hydraulic fracturing as a means to complete or recomplete a well. In addition, it places a moratorium on future gelled propane hydrofracking applications until D.E.C. can conduct an analysis of the impacts of this completion method.”