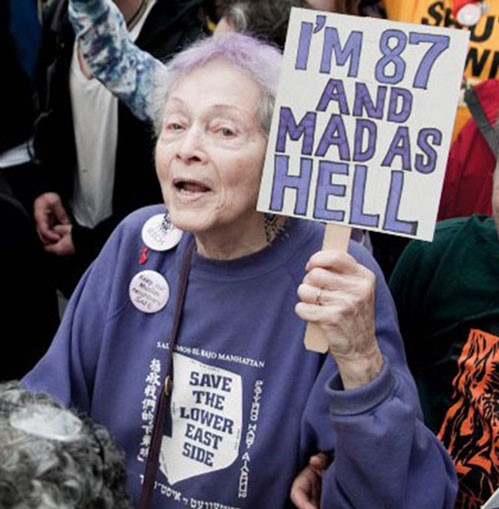 BY ROBERTA SCHINE | The young man took hold of my hand. He didn’t say a word. He was, at most, 20. White, healthy-looking and with a small, well-groomed beard, he focused straight ahead.

Purple-haired Frances Goldin, 86, was holding my other hand. She stood between me and our friend, Helen Schiff; we felt this was the best way to protect her.

It was 10 years ago, Nov. 15, 2011. We were part of a demonstration of about 2,000 people protesting the eviction of Occupy Wall Street from Zuccotti Park. We were heading to the Stock Exchange.

Occupy Wall Street was a resistance movement against social and economic inequality. It focused on the undue influence of corporations on government — particularly from the financial-services sector. OWS began in Zuccotti Park in September, 2011 and gave rise to the wider Occupy movement in the United States and other countries.

Not far from the park, we came to a fire hydrant. The boy let go of my hand and, for a moment, I wondered if he was leaving. But, as soon as he swerved around the pump, he took my hand again — and held on even tighter than before.

“Were you in Civil Rights?” he asked.

“Yes, yes,” I responded. “I participated in Civil Rights. My friends, too.”

I nodded toward Frances and Helen, “It was like this, exciting and terrifying.”

I didn’t mention that Frances Goldin was a lifelong housing, prison reform and community activist and a literary agent who would only represent progressive writers. There was a lot going on.

The police were everywhere when we arrived at the Stock Exchange. The young man squeezed my wrist tighter.

“Roberta. Are you a student?

I couldn’t hear his name because of the noise.

We made a human chain in front of one of the office buildings so that no one could get in. It was 9 a.m. and the workers were arriving.

“The Stock Exchange is closed!” we chanted. “You have the day off!”

The stockbrokers were at a loss for how to handle this. Some tried to convince us to let them get into the building, saying things like, “I don’t want to be late for work.” Others yelled profanities at us. A short, stocky guy in a three-piece suit jogged back several yards and then came galloping toward us full force, his briefcase flying in the air. He tried to break our chain but we didn’t budge. My wrist was beginning to hurt a lot.

Suddenly, there was chaos, shouting, screams… . A large cluster of protesters was squeezed together. I couldn’t breathe. We were swaying from side to side, everything was out of control. Then we tilted backwards. A few inches more and I would be lying on the street with bodies piled on top of mine. I didn’t know where Frances was. From this angle, all I could see was sky. In front of it, four faces appeared — fat, pink and furious. I remembered a word from the Sixties: PIG.

A few seconds later, everything changed. We were standing upright. My wrist was free. The crowd began screaming, “Let him go! Let him go! The whole world is watching!”

I was in the front line now and I saw that the police had thrown a man down on the street. I couldn’t see his face because it was covered with blood. One cop was holding the man’s handcuffed wrists and pulling his arms and another held his feet. As though by signal, they both lifted the screaming man off the ground, flipped him over and slammed him, facedown into the pavement. They dragged him into a paddy wagon and disappeared.

Now, Helen and Frances were by my side. I asked Frances if she was O.K. and she assured me she was.

“What was his name?” Helen asked.

“What was whose name?”

“The kid! Your friend! He was the one who got arrested!”

Some lawyers approached me.

“…his name?… We need to know his name so we can make sure he gets the medical help he needs right away… You don’t know him?”

A few months later we were in the street again, protesting Mayor Bloomberg’s racist “stop and frisk” laws. A youngster approached me: “Can I walk with you and your group?”

Schine is a yoga instructor, former karate instructor, immigration activist and writer. She teaches yoga classes for people with Parkinson’s and for people with cancer at Mount Sinai-Union Square and is a regular presenter at the National Institute of Neurology and Neurosurgery in Mexico City. Her writing has appeared in Portside.org, It’s All Right To Be Woman Theater, Rattapallax, Hawansuyo.com (in Spanish), Peregrinosysuslettras (in Spanish) and other literary publications.