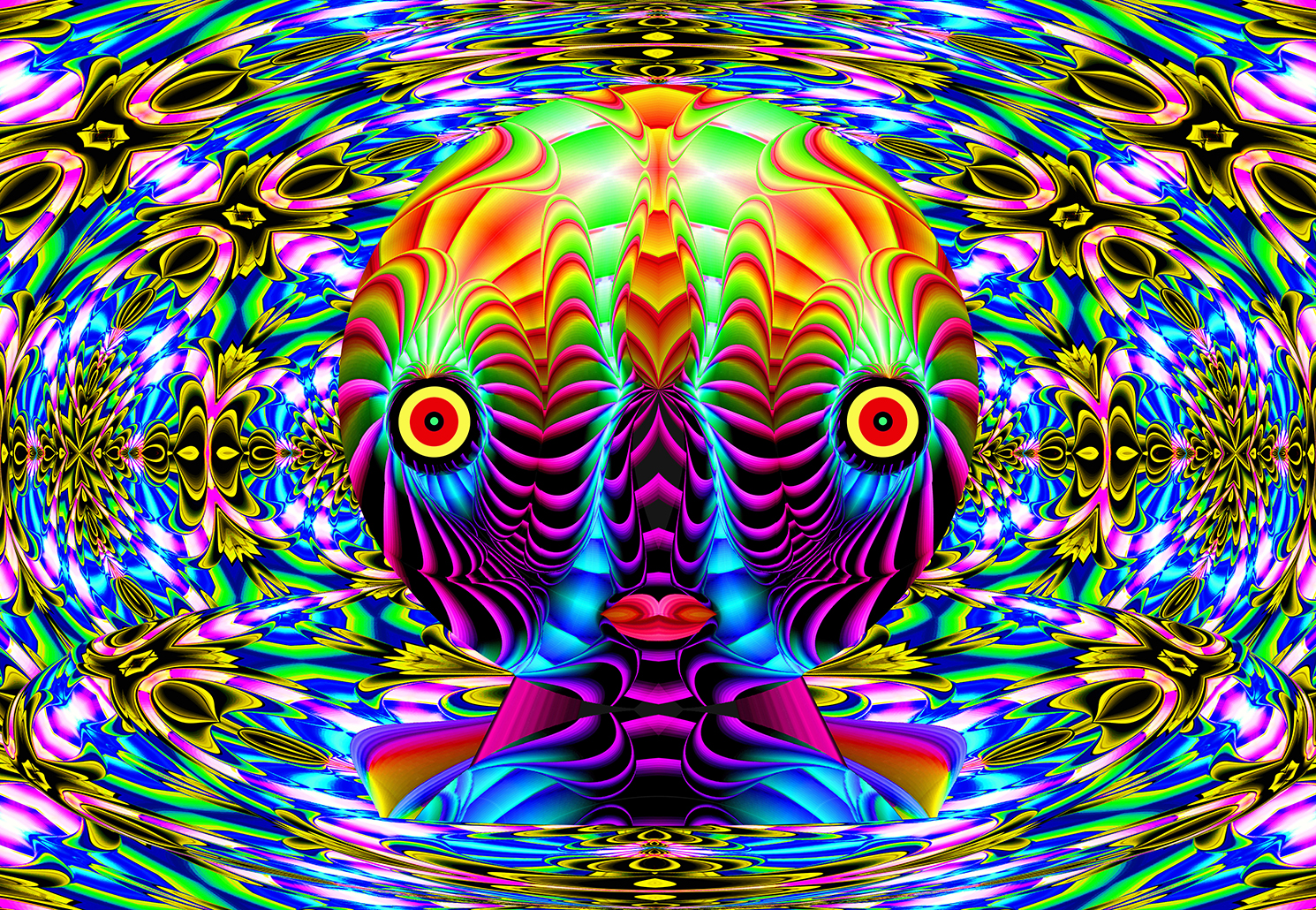 BY CLAYTON PATTERSON | Earl Einhorn has become a hermit living hidden in a forest of color digital prints with unlimited color choices. Pure color, millions of choices. How did this cultural isolation happen?

He is a mathematician and not a fine artist. Consequently, he never got into that game. He has never been in the art world, except for, since 1980, collecting Axel the Jeweler’s silver creations. One of Axel’s silver bracelet arm sculpture pieces he was able, through Leslie Barany, to get into the HR Giger Museum. Yet, here he is day and night toiling away at making art.

As a young, gutsy mathematician starting off working at the Equitable life insurance company, Earl met with the head people and said he could tackle streamlining a number system that could be done on the new IBM System/360 computer. Equitable life owned the whole building on 51st St. The basic computer in those early days took up the entire 16th floor. Today, a laptop computer can hold much more content and do an infinitely greater number of actions than the floor-sized giant could do.

By the early 1990s, Earl was involved in color digital printing, making fractal designs, but found them too limited and predicable with the swirl-pattern look. There was no way that digital printing was going to be accepted as a fine art. The printers had a very limited color palette, and the inks were such that the colors would fade, unless the print was smeared with a toxic, smelly lacquer.

With practice, persistence and his mathematics background, Earl produced the first color printed canvas because he was one of the first to use the 20K printer. He developed a high-resolution program to print 15K pixel.

Talking to Earl can get very technical, like jumping into the deep end of the pool, so here he explains the process in his own words:

“I was a computer programmer for Equitable life insurance in 1968 writing actuarial programs. I took this knowledge and started to write Fortran programs to make art around 1989 and produced various T-shirt designs dated 1991. These were only in black and white. The Microsoft platform only had black and white at that time.

“Eventually, full-color came around and I could use all the colors of the computer. Two hundred and fifty-six shades of red, green and blue. This gave around 16.7 million different colors — 256 by 256 by 256 — and you could do great shading.

“By writing my own programs, I found a way of making extreme-resolution pictures about 12,000 pixels in width, with longer lengths up to 24,000 pixels.

“I wanted to print my pictures on canvas and had to wait for the Epson 9880 printer to come along with pigmented ink. Before that, you had to use dye-sublimation printers, whose pictures had to be lacquered.

“Digital art is finally being considered fine art. I was the first making large canvases that were perfect technically and looked like a painting! My pictures aren’t bad, either. I spend many, many hours in Photoshop trying to make magic and make a picture that is way beyond! I use various multidimensional techniques to give various illusions, depending on how the picture is looked at.”

Earl’s major ambition now is to get digital art recognized as art.

Looks like art to me and, no question, it is beautiful.