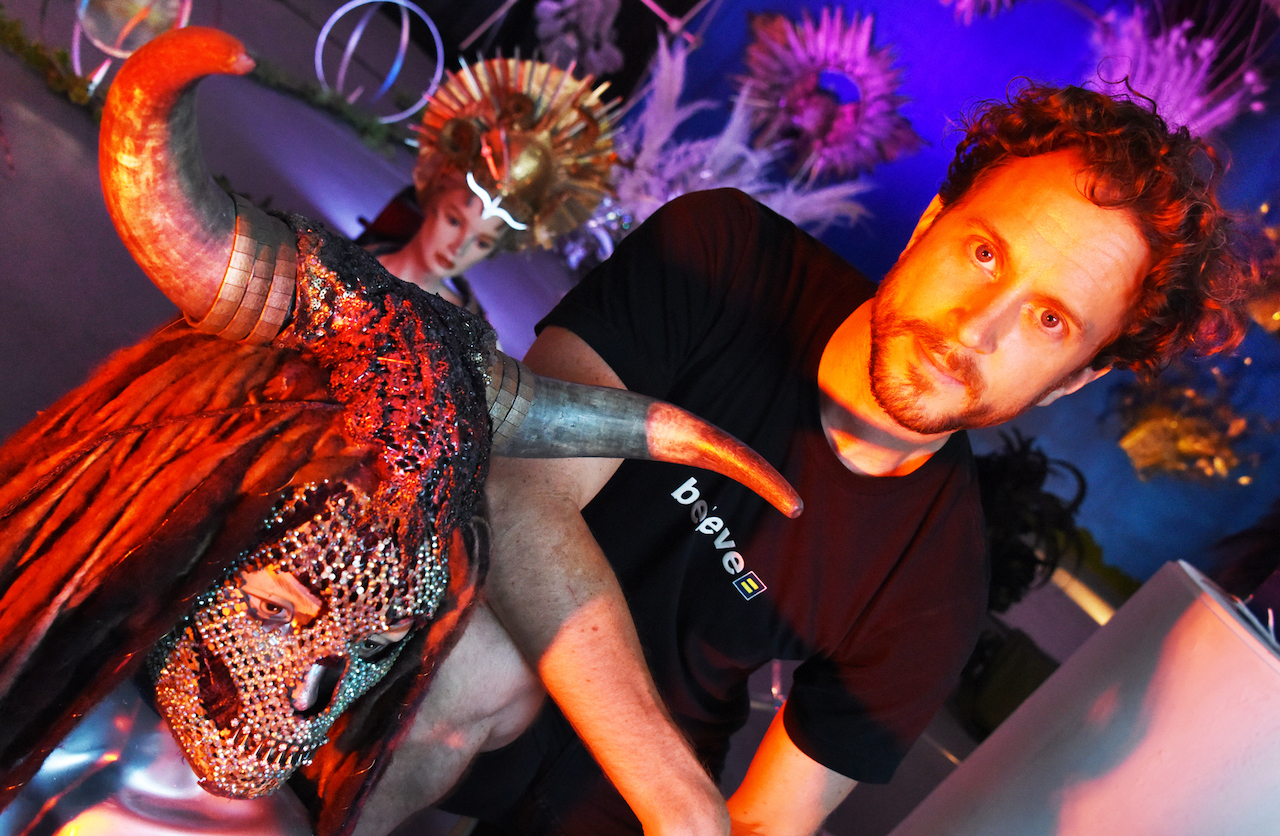 BY THE VILLAGE SUN | A fabulous window of opportunity has closed on Avenue A.

But this is New York — and there are a lot of windows.

Chashama and the National Endowments for the Arts have partnered to present a unique exhibition, “Under Glass and in Color,” featuring the work of Darrell Thorne, the Out100 designer and performance artist known for his work with Madonna, Jennifer Hudson, Blondie and more.

As part of Enlivening NYC, the new public installation was featured at a unique pop-up venue at 55 Avenue A at E. Fourth St. The opening was Fri., June 19.

“Under Glass and In Color” combines an exhibition, a residency and a durational performance into a vibrant celebration of life through costume, makeup, dance and transformation.

The exhibition ended on Mon., June 29, but Chashama is currently actively seeking a new space for it.

“They actually put the whole show in their storage space on 23rd St., just to hold until a new opportunity comes along,” Thorne said. “I know they had a meeting to talk about a new option, so hopefully I’ll hear something relatively soon.”

Chashama, which was founded by its artistic director, Anita Durst, focuses on finding unused spaces in which artists can create and perform.

Thorne intends at least to live-stream from the new space and hopefully do more performances.

On Tuesday morning, he had planned to do a livestream makeover and interview with Christeene and Kembra Pfahler, of the Voluptuous Horror of Karen Black, but that was put on hold due to the move-out.

The performances on Avenue A took place in the windows of a former bank lobby, surrounded by more than 80 of Thorne’s original designs, including a bespoke mask created for Madonna and worn in her “Living for Love” video, numerous pieces featured in Steven Klein’s Brooke Candy video “Opulence,” and a series of 18 pieces created for the Park Avenue Armory, inspired by architectural details of the building.

Also on display was a large piece created for the HBO series “High Maintenance.” Additionally, a digital-art exhibit featuring video projections of Thorne and his dancers edited and manipulated by multimedia artist Morgan Freeman played on a loop.

In a moment where we all must live with barriers, “Under Glass and in Color” invites viewers to observe an artist under glass, in a world of his own creation — 24/7 exhibition window viewing.

Thorne is a Brooklyn based, multidisciplinary artist and producer in design, makeup and performance art. His viral videos have garnered millions of views on Facebook and, just in the last three weeks, 8 million views on TikTok.

He works regularly in nightlife, theatrical and private events in New York City, nationally and internationally. He was a featured artist at the Park Avenue Armory Gala in 2016, 2017 and 2019, with a residency leading up to the event, and he produces large-scale spectacles with his company of dancers for institutions like Lincoln Center, Brooklyn Academy of Music, Chashama, New York Academy of Art and multiple private and corporate foundations.

His performances and original designs have been featured in videos for Jennifer Hudson, Blondie, Brooke Candy, The Magnetic Fields and Steven Klein, and as a principal character on Season 2 of HBO’s “High Maintenance.”

He created a custom mask for Madonna, worn in her “Living for Love” video, a custom headpiece for Giovanna Battaglia, which she described as “Oscar-worthy,” a series of Hindu deities for Martha Stewart that she called “wonderfully designed” and “amazing,” and the winning headpiece worn by Yvie Oddly in Season 11 of “RuPaul’s Drag Race.”

Thorne also created an original headpiece for the debut of “Mila, Great Sorcerer,” a new opera that debuted as part of the Prototype Festival in 2019.

His work has been featured in Vogue, Harper’s Bazaar, King Kong Magazine, Bust Magazine, Paper, Numero and V Magazine. Darrell was named one of the Out100 in 2015 and works out of his studio in Bushwick, Brooklyn.

“Chashama is returning to its roots — live window installations as we had in the good old days,” said Anita Durst, the group’s founder.

The grant for Enlivening NYC was made possible by the National Endowment for the Arts.