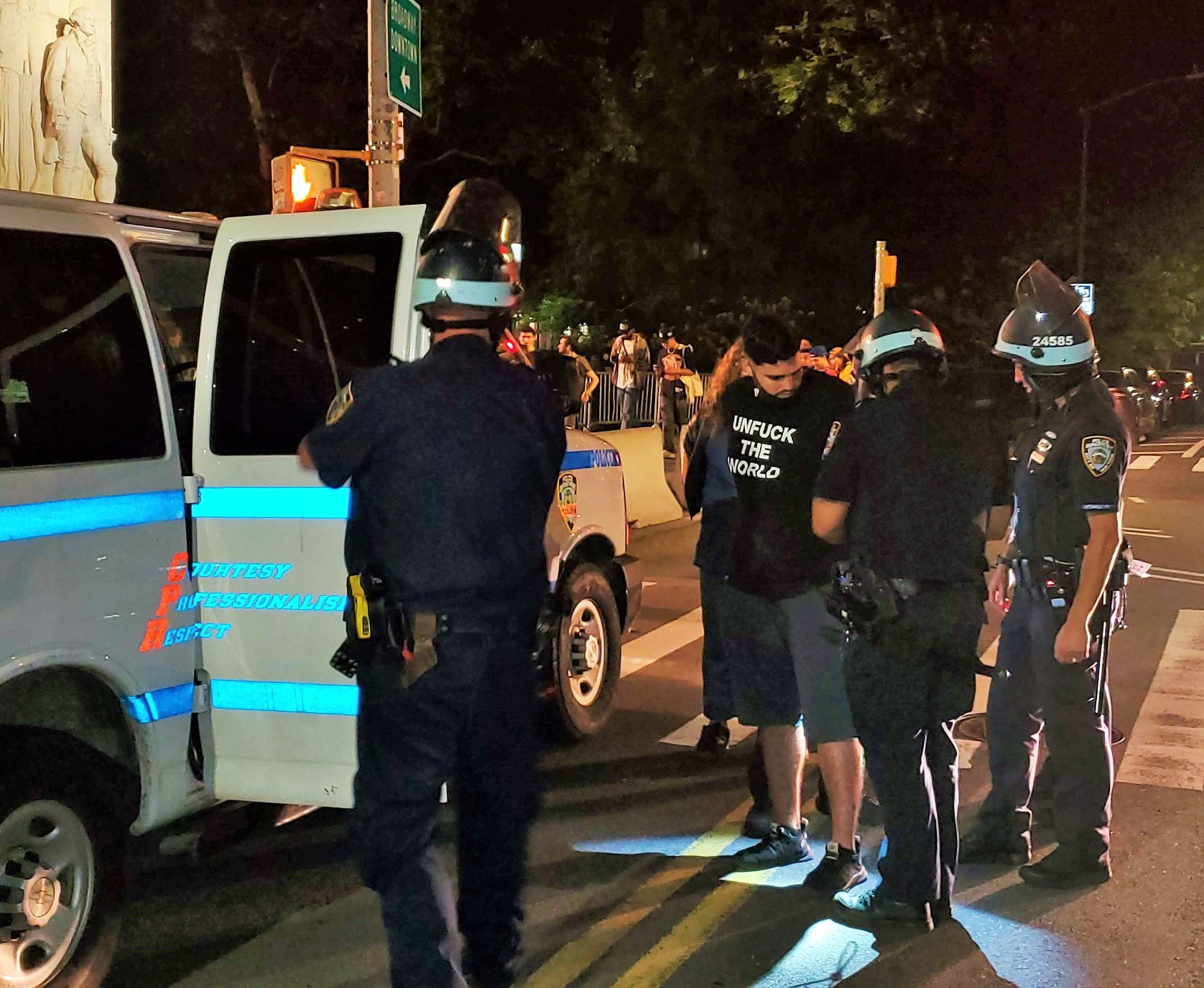 Police load one of the arrestees from Sunday night into a police van on Washington Square North. (Photo by The Village Sun)

BY LINCOLN ANDERSON | Updated July 5, 7:00 p.m.: A massive police force descended on Washington Square Park Sunday night, overwhelming a group of protesters who were thinking about staying inside of it after the midnight curfew.

In the end, the protesters decided to leave the park peacefully. But a small skirmish erupted afterward, just before 1 a.m., leading to a handful of arrests on Washington Square South just outside the park, opposite N.Y.U. Law School’s Vanderbilt Hall, near MacDougal St., according to police.

A police spokesperson said there were five arrests, including three women and two men. At least one was a transgender woman.

Jason Viarga, 35, was busted for assault, resisting arrest and obstruction of governmental administration. The spokesperson said Viarga was shining a light in an officer’s face and also struck an officer in his helmet with his hand.

Daniel Basov, 21, and Matilda Wysocki, 26, were charged with resisting arrest and obstruction of governmental administration for trying to interfere with an arrest.

Kenneth Ackerman, 31, was charged with obstruction of governmental administration for trying to pull a person who was being arrested away from the police.

A man who goes by “Rabbi,” who is a member of the police-monitoring group Copwatch, told a slightly different version of events. He said a policeman and a woman were having “a flashlight war,” with the officer trying to disrupt the woman’s video recording. Things escalated and a man, apparently Viarga, hit the cop — though straight in the face, according to the Copwatcher.

In addition, protesters said the scuffle with cops and the arrests happened on Thompson St. outside Judson Church, not farther to the west.

Police did not immediately have details on the fifth arrest. But Rabbi said he believed it was of a man named Smokey, who police were characterizing as an emotionally disturbed person, and that it had happened earlier on.

A video taken at Washington Square Park’s Thompson St. entrance on the park’s south side on the night of July 4 shows the scene after police had cleared the park and closed it by putting movable metal gates into place at the entrances. Protesters are heard taunting the police. Content warning: Strong language.

Both police and protesters said there had been a lot of fireworks in the park this July Fourth.

As the midnight curfew neared, there were reportedly about 200 people still in the park who were possibly getting ready to dig in their heels and not leave. As police showed up in force, though, this number dwindled to around 70.

Sergeant Anthony Miolan, a community affairs officer for Patrol Borough Manhattan South, said police further defused the situation by talking to some leaders who had “street cred” within the park group, who, in turn, convinced people to leave the park. Miolan noted that all the arrests occurred outside the park.

He said the group that had been in Washington Square mainly was comprised of two entities: anti-cop protesters and anti-curfew protesters.

As for an estimate of how many police were on the scene, some thought it was hundreds. But another observer who is close to the Sixth Precinct thought there had been maybe 70 cops actually inside the park, not counting the around 60 bike cops who were lined up outside the park on Washington Square South.

One protester, asked if she had tried to resist leaving the space, said they were confronted by so many police that there was literally nowhere else to move but out of the park.

Another curfew foe who had been inside the park and videotaped the standoff said the protesters never had a chance.

“There was a tremendous police presence. They were outnumbered,” he said.

A native New Yorker who does not live in the Village, he requested anonymity. He said he was distressed about how, not just Washington Square Park, but all New York City is losing its grit.

“What’s happening is the suburbanization of New York,” a woman he was with lamented.

Blasting what they deemed false narratives about the park, they said they did not believe the news reports about prostitution and open sex happening in the landmarked green space.

Plus, the man scoffed, “You’re probably the most safe when you walk past someone having sex.”

Around 1:30 a.m. an M-80 exploded, ripping through the darkness just south of the park.

“I love that,” the man said. “It’s just a sign of a little bit of defiance — because the Village is all about defiance.”