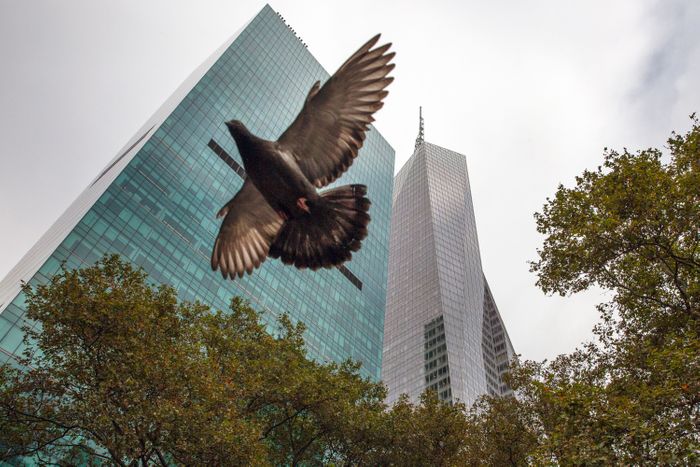 At the start of his 7 a.m. shift cleaning outside Brookfield Place in Lower Manhattan, it’s not unusual for him to find one or two bird carcasses at the base of the upscale mall’s glassy exterior. Sometimes, he disposes of four in a day, he said.

When Bautista began the job earlier this year, he asked his co-workers about the grim task.

“When I first came in, I seen them. I’m like, ‘Yo, why are all these dead birds around here?’” he said. “They told me they hit the glass and they fall and die.”

“Everybody’s heard or seen this happen,” said Christine Sheppard, director of the Glass Collisions Program at the American Bird Conservancy. “And most people think it’s rare.”

New York City Audubon estimates between 90,000 and 230,000 birds die via collisions in the five boroughs annually.

Experts say a few factors make certain buildings more deadly than others — including shiny, mirror-like surfaces near vegetation, which tricks birds into flying toward branches and leaves reflected in glass.

According to NYC Audubon’s D-Bird map, populated by reports submitted by volunteers, 48 dead birds and 14 injured birds have been spotted adjacent to Brookfield Place in just under three years.

Other repeat bird-collision culprits show up on the map: the Court of International Trade — a 1960s glass building at Federal Plaza where trees abut a transparent first floor — and the streets around Bryant Park, where glassy skyscrapers loom over the green space.

Still, NYC Audubon’s data is limited to where people report collisions, noted Susan Elbin, the group’s director of conservation and science. That means large swaths of the map are nearly empty — particularly outside of Manhattan, where low buildings and increased vegetation put birds at just as much risk.

“It looks like there are no collisions in Staten Island. Well, that’s wrong,” Elbin said. “It seems like it’s a Manhattan issue, but I think it’s just because so many people are walking around Manhattan.”

Another reason collisions may happen a lot more in undercounted areas: Most bird deaths happen below the tree line — not on glass up high on a skyscraper.

“They say most car crashes happen within [a few] miles of home because that’s where you do all your driving,” Sheppard said. “Well, that’s where birds are doing all their flying — looking for food and shelter.”

The collision problem is a part of a larger environmental crisis for birds: A recent multi-year survey indicated 29 percent of birds have disappeared from North America since 1970.

For Elbin, a career ornithologist and conservationist, the report hit hard. It showed losses of “common birds,” such as sparrows and thrushes — the same types her group has found dying in droves in New York.

“We’re just whittling away at the population,” she said. “And pretty soon it’s going to go the way of the passenger pigeon, where they were so common, and now they’re extinct.”

There is some hope, however. In New York, solutions to this particular wing of the problem are already in the works or underway — and they’re relatively easy to deploy.

At the state level, a bill to create a panel to promote bird-friendly construction passed the Assembly and Senate in the spring, and has been awaiting action from Governor Andrew Cuomo. The bill’s sponsors are Deborah Glick in the Assembly and Brad Hoylman in the state Senate.

In the City Council, a pending bill introduced earlier this year would mandate that all new construction or building alterations use bird-safe measures on facades below 75 feet.

That could mean installing specially designed “bird friendly” glass, creating a screen or barrier in front of glass or adding decals, stripes or dots to glass so birds know to steer clear.

Those fixes are already saving avian lives at what was once one of Manhattan’s most notorious bird-killing buildings: the Javits Center. With its dark, mirrored exterior, the complex was called the Darth Vader of collison-prone structures.

Following the addition of bird-friendly design elements and a green roof, collisions have been nearly eliminated at Javits, according to NYC Audubon.

Sheppard, of ABC, pointed to another success story: the U.S Postal Service’s Morgan Processing and Distribution Center in Chelsea, which at one point claimed the lives of hundreds of birds in just a few weeks of monitoring.  The installation of vinyl over decorative glass for about $200,000 in 2007 stemmed the problem.

She stressed there are many options for making a building more bird friendly — from tape and decals to high-end architectural designs.

“It’s important to be pragmatic. There’s no way to be perfect with this stuff,” Sheppard said.

A spokesperson for the City Council said the bird bill is going through the legislative process, and has not yet been scheduled for a vote.

In the meantime, the birds that escape collisions alive usually end up in the same place: the Wild Bird Fund, New York’s only bird rehabilitation group. At a hearing last month on the Council bill, the fund’s director, Rita McMahon, testified that her organization treats about 1,000 birds a year.

A green heron is our latest window strike victim. We’re sorry to say that this beautiful bird didn’t even make it through the exam. It’s been a rough day. 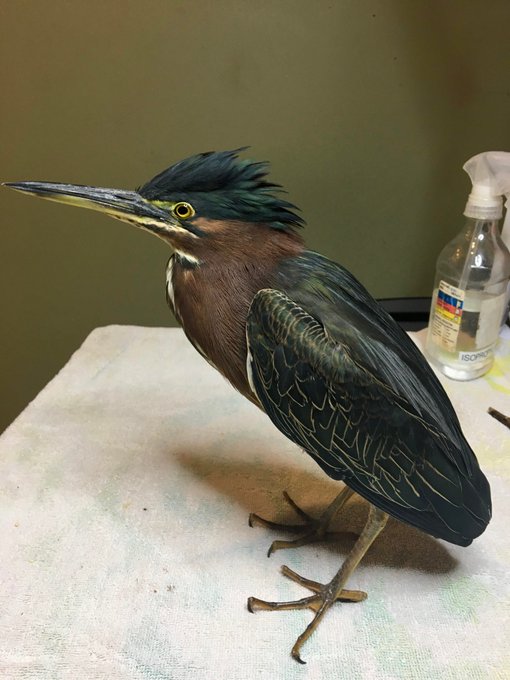 “Our window-strike patients suffer from concussions, eye and beak damage, broken wings and legs, and internal injuries,” she said at the Sept. 10 hearing. “Just over a third survive.”

At Brookfield Place, Bautista has gotten used to seeing birds beyond healing. But it’s still “a little sad,” he said, when he has to put one more in the trash.