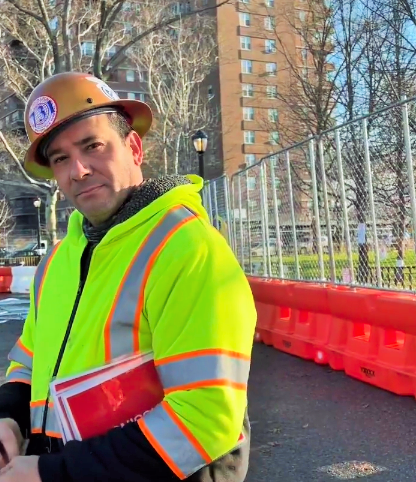 Hard hats doing prep work at Cherry Hill on Mon., April 4, confirmed they would not start cutting down trees on that day. (Twitter/1000 People 1000 Trees)

BY THE VILLAGE SUN | Although workers fenced off Cherry Hill in Corlears Hook Park on Monday, they didn’t immediately start cutting down trees.

As a member of the group 1,000 People 1,000 Trees points out in this video posted to Instagram, above, that the arborist who signed off on the destruction of 630 East River Park trees, Jeff Pilot, was not on the scene yesterday. An arborist is needed in order to allow the trees to be cut.

Desiree Gazzo, a community liason for the city’s East Side Coastal Resiliency megaproject, declined to talk with the protesters.

“Why are you here today?” the activist filming the video asks her as Gazzo walks off.

The park defenders say some of the cherry trees in the Lower East Side’s Corlears Hook Park are more than 80 years old.