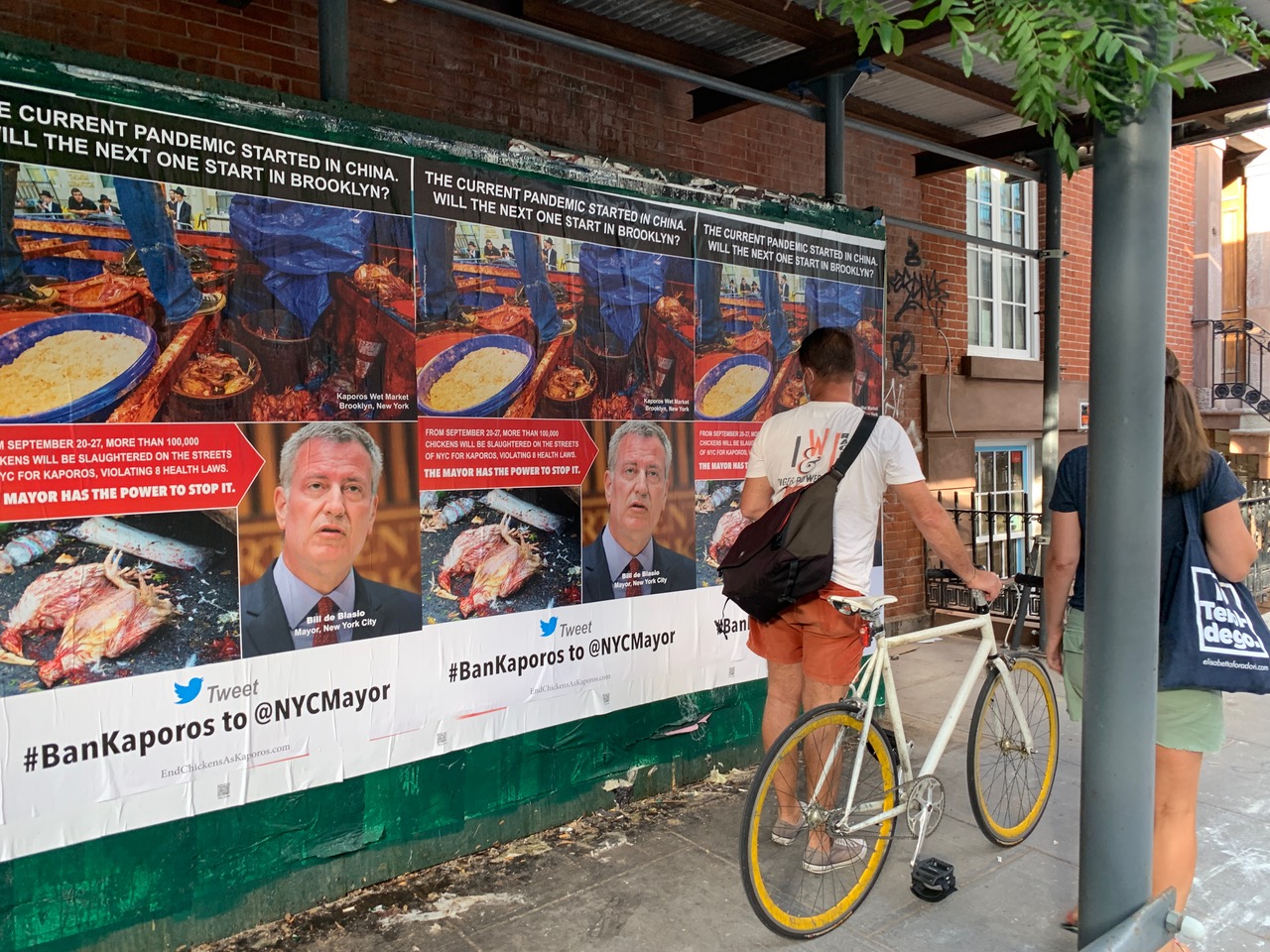 A poster campaign asked the mayor to ban the use of live chickens for Kaporos.

BY THE VILLAGE SUN | Using live chickens for Kaporos is inhumane and not even necessary. In other words, it’s really fowl. The practice should end.

That’s the message that animal-rights activists are trying to get out with a current poster campaign, as well as letters to Mayor de Blasio and Governor Cuomo.

The ritual, done by some ultra-Orthodox Jews, runs from Sept. 20 to Sept. 27, from the end of Rosh Hashanah, the Jewish new year, to the start of Yom Kippur, the Day of Atonement. During the rite, a person twirls a live chicken over his or her head, “transferring sins” from person to poultry.

But animal-rights activists say coins simply can be used instead of chickens for transferring sins.

After the birds are twirled overhead in Kaporos, they are slaughtered on the spot in what the activists charge are essentially “pop-up wet markets.”

Given the theory that COVID-19 first broke out in a wet market in China, animal-rights activists warn that using live chickens, some of them unhealthy, in a similar setting poses a real risk to humans. There are thought to be roughly 30 of the pop-up Kaporos wet markets on public streets around the city.

“Kaporos is the largest wet market in the country and the only one in which the customers handle the animals,” said Nathan Semmel, one of the animal-rights activists. “Conservative estimates place the number of chickens handled and slaughtered at 100,000. The tens of thousands of people who participate do not wear PPE. Many of the animals are visibly sick with respiratory disease and the conditions are filthy. According to public health experts, such an environment creates a real risk of a zoonotic disease outbreak, which could lead to another pandemic.

“The tens of thousands of people who swing live chickens around their heads will not social distance in the carnival atmosphere,” Semmel added. “They will place residents, passersby, law enforcement officers, healthcare workers and all those who come in contact with them at increased risk of contracting COVID-19. It should be noted that the affected neighborhoods are already decimated by the virus.”

However, despite the activists’ campaign, the city and state have shown no sign that they intend to ban the use of birds at Kaporos.

The Mayor’s Press Office did not respond to request for comment by The Village Sun.

In addition, according to the activists, most of the chickens used for Kaporos in New York City are, in fact, not even given away to charity.

“The Hasidic community claim to donate the chickens for food,” Semmel said, “but we see year after year that only a tiny portion of the chickens are processed for consumption. The overwhelming majority are put in garbage bags and removed by the Department of Sanitation.”

The opponents charge that Kaporos also violates eight city health codes — from slaughtering animals in residential neighborhoods to discarding blood and body parts in the streets.

When videoed by the activists, Orthodox Jews observing Kaporos have accused them of being anti-Semites, Nazis and self-hating Jews.

However, Semmel claimed there is, in fact, no biblical or Talmudic basis for the bird bloodbath.

“The custom does not appear in the Old Testament or the Talmud,” he said. “Most Jews don’t practice it at all. Most of those who do, use coins and donate them to charity. Then you have the ultra-Orthodox who use live animals and have completely bastardized it.”