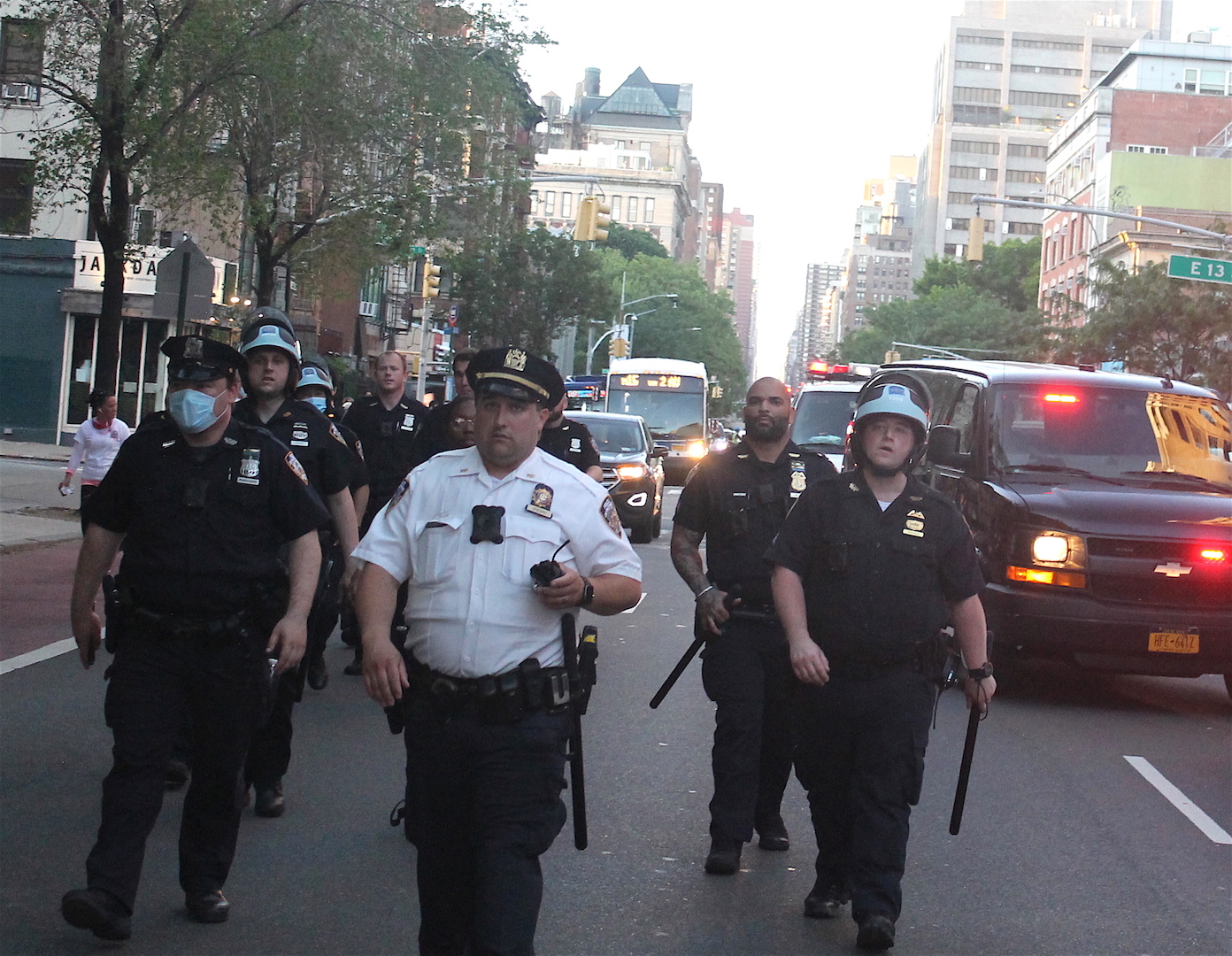 In early June, some police following a Black Lives Matter protest march down Second Ave. were not wearing face masks. (Photo by The Village Sun)

BY THE VILLAGE SUN | Looks like there’s a new sheriff in town — at least on face-mask enforcement for cops, that is.

Brad Hoylman laid down the law last week to Police Commissioner Dermot Shea about wearing face coverings — and within four days the top cop had issued a statement “reminding” members of the force that masks are mandatory for them, too.

Shea noted that officers must wear real face masks — not bandanas, scarves or handkerchiefs — adding that department “investigation units” will be tasked with mask patrol, and that cops who fail to comply will face disciplinary action.

The state senator, of course, was not the first to notice that many police officers have been spotted maskless during the pandemic. However, back in April, Governor Cuomo issued an executive order mandating that “any individual who is over age two and able to medically tolerate a face-covering shall be required to cover their nose and mouth with a mask or cloth face-covering when in a public place and unable to maintain, or when not maintaining, social distance.” Police were not exempted from the governor’s order.

Hoylman sent his letter to Shea on Mon., Sept. 28. In it, he noted that at the start of September, the Metropolitan Transportation Authority announced that it would begin fining straphangers without face coverings. The state senator added he was also very concerned over constituent reports that police and people waiting in line in close proximity at the West Side tow pound, at Pier 76, at W. 38th St., in Hudson River Park, were unmasked.

“I know you agree that the N.Y.P.D. has a unique responsibility to model lawful and prudent behavior, which has only become more important during the current public health crisis,” Hoylman wrote Shea. “I urge you to enforce the face-covering mandate within your ranks to both set a good example for New Yorkers and protect public health.”

In a press release announcing his call for cops to mask up, Hoylman added that as of Sept. 3, COVID-19 was the leading cause of death for police officers in the United States. At least 43 N.Y.P.D. officers have died from COVID-19 and the department has reported more than 5,700 cases of officers with positive COVID tests.

Following Hoylman’s letter, Cuomo and Mayor de Blasio promptly piled on, ratcheting up the pressure for police to strap on their masks. The day after Hoylman wrote Shea, Cuomo reiterated his call for police to cover up; he had already done so previously back in June as the protests were raging. The day after that, de Blasio proclaimed there “should be penalties” for police who flout the face-mask rule. By that Friday, Commissioner Shea had sent out a “reminder” notice to all members of the force, stating that wearing masks is not optional.

The Village Sun obtained a copy of the internal notice (below) that was sent from Shea to all N.Y.P.D. officers:

Mandatory Face Coverings for Members of the Service

Office of the Police Commissioner

For the health and safety of all of our employees and the public, all members of service are reminded that they are required to wear face coverings at all times when performing duties in public areas and Department facilities and whenever social distancing is not possible. This includes in shared offices, elevators, hallways and bathrooms.

Face coverings need not be worn when engaging in activities such as consuming food, drinking beverages, or adjusting the face covering due to the temperature or to correct a breathing condition.

Members of the service returning from a state or country with a travel advisory must wear a face covering at all times while working for 14 days after returning.

Any member of the service who does not currently have a face covering is directed to immediately notify their supervisor. Members are not permitted to wear face coverings that were not originally designed for that purpose, including, but not limited to, scarves, bandanas, handkerchiefs, etc.

Employees who are unable to wear face coverings should contact the Equal Employment Opportunity Division for guidance.

All Investigation Units will be monitoring the compliance of the above requirements. Commanding Officers will also ensure that all supervisors, including Integrity Control Officers, are frequently inspecting their personnel for compliance.

Failure to comply with the above listed guidelines, or other appropriate posted signage, will result in disciplinary action.

Last Tuesday, a day after Hoylman sent his letter to Shea, when The Village Sun asked a police spokesperson if there was a department policy on face masks, she sent a video clip of Shea speaking to the issue on a TV news segment four days earlier.

In the interview, Shea basically says that police are like people in “any occupation,” in that, some wear masks and others don’t.

“We are human,” he said, adding of cops who shun masks. “We are New York City. Certainly, I’m not condoning it.”

Asked if there was a more formal policy statement on masks behind Shea’s comments on the news clip, the Police Department spokesperson did not respond.

However, in a statement to The Village Sun this Monday, a police spokesperson did provide a statement, saying, “We take the responsibility to wear masks extremely seriously. The N.Y.P.D. serves to keep New Yorkers safe and we will continue to work to ensure our cops are in compliance.”

Before Shea issued his notice on masks last week, Robert Jackson, a Sixth Precinct community affairs officers, told the paper, “At the Sixth Precinct, we’re supposed to wear the masks when we engage with the public.”

Hoylman was heartened that his push for police to wear masks seems to have had an impact, but he stressed that “specific penalties…not just vague promises” are needed.

“It’s promising that the governor, mayor and Police commissioner all agree that penalties are necessary for police officers who don’t wear masks,” Hoylman told The Village Sun. “But we need the mayor and Police commissioner to outline specific penalties. We need real commitments, not just vague promises. The N.Y.P.D. is increasing enforcement in new COVID-19 hot spots and I fear the sight of maskless officers will undermine the many efforts to get this recent spike under control.”

Without mentioning him by name, Hoylman referenced President Trump, who was then being treated at Walter Reed Medical Center for coronavirus.

“We’ve just witnessed in recent days,” Hoylman said, “how important it is that figures of authority model the appropriate behavior during the COVID crisis and the dangerous results if the rules of face masks and social distancing are foolishly flouted.”

On a much less serious issue, one wonders what the N.Y.P.D. policy is on police hats. Most cops nowadays, at least during this past summer, do not wear them.

“We are given hats,” Jackson, of Sixth Precinct community affairs, stated. However, asked if there is any rule about wearing them, he said that’s a question for the police press department or the commissioner. A spokesperson did not respond to a question on what the department’s hat policy is.