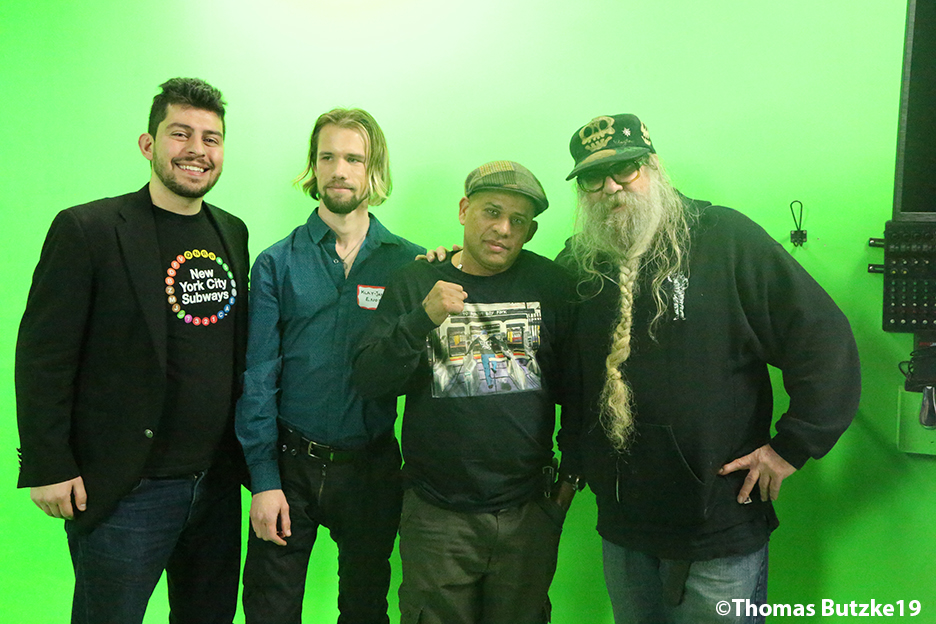 At Jump Into the Light VR, shining a light on artists and the street

BY CLAYTON PATTERSON | Jump Into the Light is a small start-up virtual-reality cinema, playlab and studio. I appreciate them because they embrace community.

JIL, at 180 Orchard St., operates as a VR arcade, but it also has art shows and artists in residence. I fit more into the artist-in-residence category. And I help get the message out to the larger community about the events they have that are open to the public.

This recent panel was JIL’s first group art show and art panel. It was put together by Sophocles, an artist-in-residence. The topic he chose was artists connected to the street.

For starters, I admit that I know very little about this new — at least new to me — technology. Since I document the community, JIL asked if I would connect with Royal, one of the people who worked there at the time and go out and do some 360-degree camera interviews. We did about 12. They partnered me with Thomas Butzke, a filmmaker and technical champion, who connected all the dots and we made our first VR documentary.

Our first choice for a doc subject was artist Angel “LA II” Ortiz sitting in his studio talking about his new work and his collaborations with Mark Kostabi, and with London artists Bansky and Stick. Angel is looking at going to London to do some collaborations with Stick.

You put on the goggles and can hear the interview and are able to go around the whole 360-degree view of LA II’s gallery — ceiling, floor, behind you, or just concentrate on watching the conversation. It really feels like being there.

This interview runs a little over 7 minutes and will be featured in the Victoria Film Festival this April. This was the first doc by JIL to get into a film festival.

I helped them make their first step into the film festival world. They pushed me into learning a new form of documentary possibilities. Different pieces of the community all working together.

For more about Jump Into the Light and its events, click here.