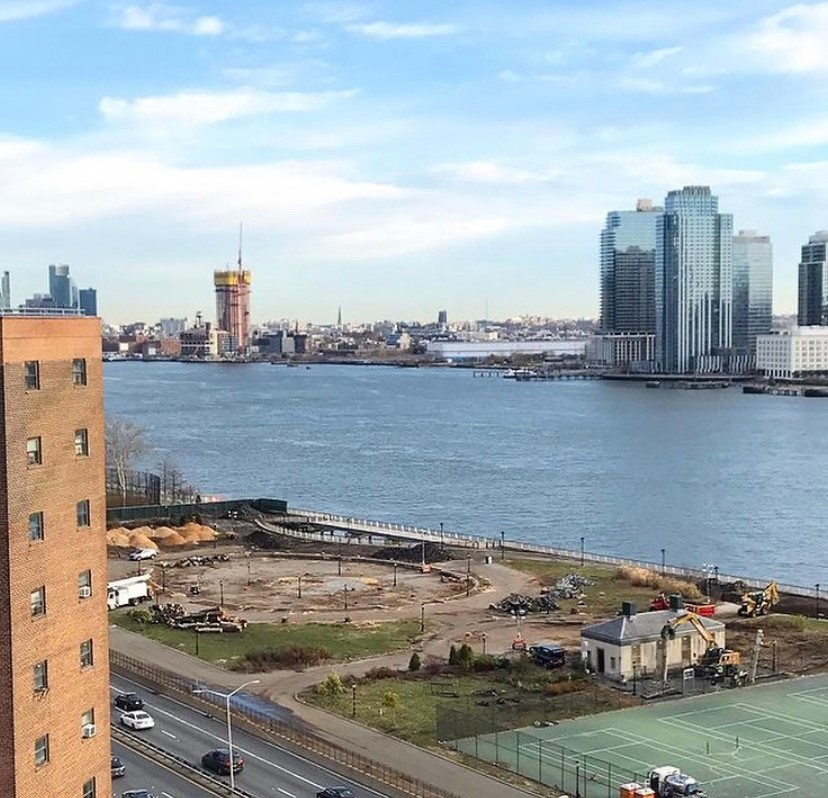 BY LINCOLN ANDERSON | The infernal roar of chainsaws and construction machines in East River Park lessened a bit Monday afternoon after a judge signed an order for the de Blasio administration to show how it is not in contempt of court. Yet the destruction still has not stopped, with a renegade crew continuing to slash a path of obliteration through the historic park.

On Tuesday afternoon, the hard hats were reportedly attacking and ripping up the park’s landmark amphitheater, where Joseph Papp launched Shakespeare in the Park.

Judge Rowan D. Wilson of the Court of Appeals, the state’s highest court, said he would address the contempt issue this Thursday afternoon. He also moved up to Thursday the hearing, previously set for Dec. 20, for the appeal of the lawsuit East River Park ACTION et al v. the City of New York. The lawsuit argues that an “alienation vote” by the state Legislature is required before the $1.45 billion East Side Coastal Resiliency project can go forward.

The plaintiffs’ attorney on the lawsuit, Arthur Schwartz, argues that a previous temporary restraining order, or T.R.O., from a lower court’s hearing of the case should be back in effect now because the Court of Appeals has decided to hear the case.

As soon as Wilson signed the contempt order on Monday at 2 p.m., some of the work in the park abruptly ceased. But not all.

In an incredible scene of destruction, over the weekend and up until that point on Monday, hard hats had been furiously working 24/7 to wipe out as much of the park south of Stanton Street as possible.

However, Kathryn Freed, a former councilmember and retired judge who is a co-counsel on the contempt matter, said, while most of the workers have knocked off, one “crew” is still out in the park wreaking devastation to any and all foliage, specifically, around the amphitheater.

“This is like contempt on top of contempt,” she said of the rogue crew. “This is like spitting in the face of the court.

“It’s not just the trees — they are cutting up anything they can get their hands on,” she said. “It’s like a blitzkrieg. It’s like scorched earth. They’re just destroying everything in their path.”

Freed said one of the members of the renegade crew, a woman, is recognizable by an N.R.A. sticker on her hard hat.

She noted that the trees around the amphitheater in Corlears Hook are some of the oldest in the park and may, in fact, predate the park itself, which is 82 years old.

“Some of these trees were there before,” she said. “It might not be landfill there.”

Some park activists venerate the area around the amphitheater as sacred land from when it was inhabited by the Lenapes, Manhattan’s Native people. The spot was also the site of a massacre of the Lenapes by the Dutch in colonial times, making some speculate that bodies are buried there.

Tommy Loeb, a member of East River Park ACTION, who has a view of the park from his window at Grand Street, confirmed the destruction of the park was continuing on Tuesday.

“They’re destroying everything, including the amphitheater,” he reported.

That this one crew has still been out there, even after the judge signed the court order, speaks to City Hall’s stunning arrogance, Freed fumed, likening it to President Trump’s trying to invalidate the 2020 election results.

“I’ve never seen anything like this,” she said. “This mayor says he’s such a liberal and progressive. This is Trump tactics. They’re spitting in the face of the city and the courts.

“This is the mayor or someone else deciding they’re above the law — and it’s really dangerous,” she said. “And de Blasio wants to be governor. What would he do if he was governor? Call out the National Guard to do this [project]? It’s despicable and it’s frightening for the mayor to act this way.”

Freed said it’s incumbent on the city’s Law Department to make the workers in the park halt their destruction immediately and at least until Thursday’s decision by the judge.

Speaking on Tuesday around 12:30 p.m., she said she had just sent an e-mail to Mackenzie Fillow, the city’s attorney on the case, demanding that all work in the park cease per the judge’s order.

Of course, the workers are motivated to keep at it because they are getting paid.

Freed said she is also pushing to move the appeal hearing on the alienation lawsuit up to Wednesday, in hopes of winning a decision then and ensuring that the term-limited de Blasio, who must leave office in two weeks, has one less day to do any more damage to the park.

The former councilmember said she has been under a constant barrage of phone calls to and from the city attorney, the press, activists and others about the shocking destruction of the park, which she lives right across the F.D.R. Drive from. The entire experience and the unfathomable fact that a beloved, historic park is being bulldozed right before her very eyes has been draining.

“I’m going to get off [the phone] and take some ibuprofen,” she said. “I have a splitting headache.”