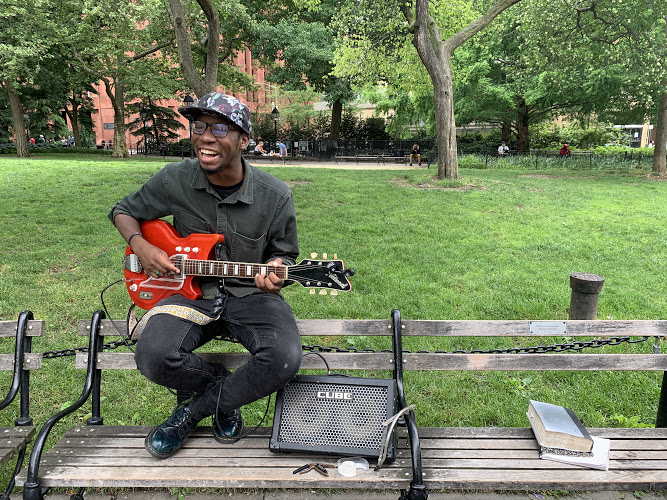 Guitarist Aaron Gamman said police and the Parks Department should focus on more serious matters, like people O.D.'ing in the park, instead of cracking down on amplified sound. (Photo by Carmo Moniz)

BY CARMO MONIZ | Many artists and vendors in Washington Square Park, known for its popularity among artists, students and protesters, are struggling to perform and vend legally in the face of park rules. For this year through the end of May, Parks Enforcement Patrol officers issued 40 summonses for unauthorized vending in the park, compared to just three for all of last year.

The park rules, which were last modified in 2013, state that those selling art, photography, reading material and sculpture — all of which is classified as expressive matter — must leave a 12-foot-wide pathway for pedestrians when setting up their stands in the park. They must also be next to the curb unless they are selling at a marked spot, though park rules do not designate any of these spots in Washington Square Park.

“Washington Square Park is a bastion of artistic expression. We support expressive-matter vendors performing in parks, following long-standing related rules,” Megan Moriarty, a press officer for the Parks Department, said. “Our PEP officers’ first course of action is to educate parkgoers to our rules; if not followed, the next step would be to issue a summons, and only in extremely rare circumstances would we effectuate an arrest.”

Expressive-matter vendors cannot occupy a space larger than 8 feet long by 3 feet wide parallel to a path or curb, and their stands must be from 2 to 5 feet high. Vendors must also be more than 5 feet from any park or street furniture — such as benches and light fixtures — and be more than 50 feet away from public art installations and monuments, including fountains.

The width of the pathways in Washington Square Park, lack of designated selling spots and the placement of park furniture and art installations, including the fountain near its center, provide an obstacle for vendors to set up legally. In addition to the potential consequences of a summons and arrest, artists and vendors in violation of park rules must pay a civil penalty, which may be recovered in proceedings with the Office of Administrative Trials and Hearings a.k.a. OATH.

Expressive-matter vendors can face penalties ranging from $500 to $750, and the penalty is the same for unauthorized music or noise for commercial purposes. Aaron Gamman, who has been playing guitar in the park for the last three years, said that he has been shut down as well as threatened with the seizure of his guitar and arrest by park authorities.

“It seems like a little tiny war going on between the people who frequent the park and the authorities, and it’s so strange what they choose to settle on — what’s going to make the park better — because right now, they’re really focused on amplification, no amps whatsoever, because they don’t want noise complaints,” Gamman said. “I’ve been here for three years and there’s so many people overdosing and dying over there and in the bathrooms, but they’re choosing to harass a bunch of artists and musicians in the name that it’ll look like they’re doing good.”

In several other major parks, such as Central Park, Battery Park and Union Square Park, there are designated spots — marked by medallions — on which expressive-matter vendors are allowed to sell. In Central Park there are also additional areas that do not require vending at a designated spot. In Washington Square Park, however, the absence of these medallion-marked spots leaves vendors to work with limited space due to distance regulations.

In 2010, Robert Lederman, the founder of Artists’ Response to Illegal State Tactics (A.R.T.I.S.T.), sued the city’s Department of Parks and Recreation over the rules, arguing that they were unconstitutional because they were content based — as in, based on the substance of what was being communicated by vendors. In 2013, however, the U.S. Court of Appeals, Second Circuit ruled that the regulations were constitutional, allowing them to stand.

Lederman blasted the Washington Square Park Conservancy for trying to control the park.

“That conservancy is violating the entire spirit of what a public park is,” he said. “They try to organize their own shows, their own performances, their own everything there — it’s all about a handful of rich people that live near the park.”

A report by Gothamist in late March found that members of the Washington Square Park Conservancy, which is not supposed to participate in planning, policy or the creation of events, called for some park events to be eliminated and for the enabling of private programming in public spaces. The same report found that park administration had consulted with the group in a decision to block off the drug-plagued northwest corner of the park and reserve it for conservancy programming.

Lederman also said that inconsistent enforcement of park regulations is confusing artists and vendors in terms of what they can and cannot do, and that enforcement is dependent on reports from others who occupy the park.

“There could be 500 vendors in a park, but if nobody’s complaining, nothing’s gonna happen,” he noted. “So there’s no consistency in the way the enforcement’s done, and it actually encourages vendors, artists, performers, to ignore the rules because the rules are enforced so sporadically. You could be in Washington Square Park for a month, violating every single park rule, and nothing will happen to you — and then, all of a sudden, every day you’ll be given a summons or arrested.”

Anyone in the park selling nonexpressive-matter goods needs a vending permit from the Parks Department. Those found vending without a permit can face a penalty of up to $375 for having a stand and up to another $375 for unlawful vending, with the unlawful vending penalty rising to $500 to $750 for a subsequent violation within the year. The sale of marijuana and alcohol is also prohibited in the park, though some vendors sell them.

“I don’t want to be a target to the cops. You’ve got to respect them when they come and tell you, ‘Listen for the day you can’t work’ — so just leave, you could always make money tomorrow,” said Innddia Rojas, who has been vending in the park for two months. “Half of the people that didn’t leave yesterday, today, they’re gonna mess with them because they stood, they didn’t follow orders. When you want to do something, especially if you know you’re not legal, the only thing you gotta do is follow some orders and you’ll be under the radar.”

Lederman added that the history of free expression in the park contributes to artists’ and vendors’ ability to remain there despite regulations.

“You can talk to people in China, Japan, Korea, Africa, they all know Washington Square Park. They know what went on there, they know Bob Dylan played there,” Lederman said. “If the city tried to get rid of everybody there, there’d be just a massive outcry and it would result in some politician probably getting voted out of office. That’s the reason that they let what goes on there go on — but again, none of it’s legal according to the park rules.”