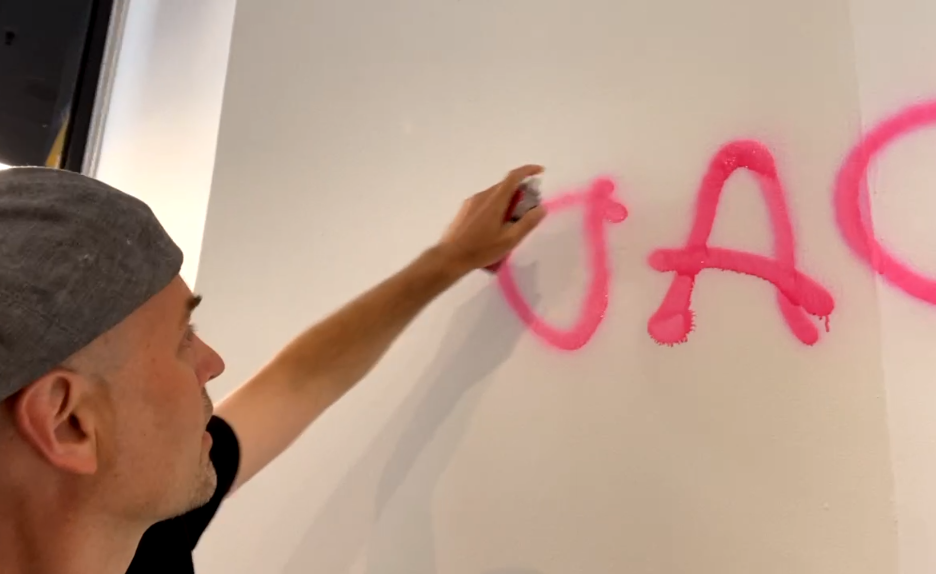 Rod Webber wrote graffiti inside a Soho gallery that will have an exhibit of Hunter Biden's paintings in the fall. (YouTube)

BY LINCOLN ANDERSON | Updated July 15, 1:35 p.m.: Rod Webber, an artist and filmmaker, says when he sees BS, he calls BS. Also a performance artist, he says nine times out of 10, his actions are “pretty spontaneous.”

So, last Friday, when he saw Jen Psaki, the White House press secretary, claim that neither Hunter Biden nor the Biden administration would receive any information about buyers or prices of Hunter’s art being sold through a Soho gallery, Webber sprung into action.

Within an hour of Psaki’s press conference, Webber, who lives in Boston, entered the Georges Bergès Gallery, at 462 West Broadway. Hunter Biden’s artwork is not on view there currently. But an exhibit of 15 of his paintings — his first art exhibit ever — is slated to open there in October.

In this case, Webber admitted that he had also caught wind of the gallery show from coverage in the Washington Post and some tips from friends in the New York media.

Wearing paint-splattered jeans, Webber stealthily strode to a wall, whipped out a spray can and started to write “Daddy” on it in pink letters. He intended to spell out “Daddy War Crimes,” a take on Daddy Warbucks of “Little Orphan Annie” fame.

Before he could even finish one word, though, a young gallery worker — reportedly Rustam “Jack” Davletshin — tackled Webber and then held him in a bear hug until cops arrived. All the while, as they were grappling and rolling around, Webber kept recording it on his phone, as did an apparent colleague of his who was also there.

As Davletshin was detaining him, Webber argued that he didn’t do anything wrong, claiming he did not even technically use paint.

“It’s hairspray!” he yelled. “Hairspray is not illegal!”

Apparently, the gallery is on the lookout for incidents like this after it became publicly known it was repping the president’s son. According to WWD, “Georges Bergès Gallery staff is on high alert due to numerous threats, including death threats.”

Webber, 47, also is known for a similar act at Art Basel in December 2019, when he wrote in lipstick on an empty wall, “Epstein didn’t kill himself.” Before Webber scrawled his graffiti, the wall had a banana duct-taped to it that sold for $120,000 but was subsequently eaten by a different performance artist.

Webber wrote the Jeffrey Epstein graffiti, he explained, because he wanted to “start a conversation” about the shady circumstances of the sex offender’s death.

As for his action at the Soho gallery last week, the self-described “hardcore leftie” said, “It was really a political protest — not so much Hunter Biden, but Joe Biden’s war crimes. … The bombing of Syria and Iraq — Joe Biden’s bombing black and brown people. You need an act of Congress [to authorize air strikes]. It’s been a war against the people of the Middle East since 9/11. Every president ends up dropping tens of thousands more bombs than the previous one.”

The artist said he sees his actions as “anti-imperialism for dummies.”

Meanwhile, Webber said he finds it absurd that Americans are supposed to believe that Hunter and Joe Biden will not be informed about potential buyers and the pricing of Hunter’s art. The obvious concern is that individuals who want to curry favor with or gain access to the president will want to purchase Hunter’s paintings.

In her remarks on the issue, Psaki said, “A system has been established that allows for Hunter Biden to work in his profession within reasonable safeguards. Of course he has the right to pursue an artistic career, just like any child of a president has to pursue a career. But all interactions regarding the selling of art and the setting of prices will be handled by a professional gallerist adhering to the highest industry standards. And any offer out of the normal course will be rejected out of hand. And the gallerist will not share information about buyers or prospective buyers, including their identities, with Hunter Biden or the administration, which provides quite a level of protection and transparency.”

The other concern is whose hands will the money end up in? Prices for Hunter’s art will reportedly run from $75,000 up to $500,000. No doubt, the Biden brand is fueling the inflated price tags.

“Some of these paintings are going for half a million dollars,” Webber said. “I mean, it’s crazy — his first show.”

Apparently triggered by the Soho art exhibit, a group of congressional Republicans this Wednesday sent a letter to the White House counsel demanding information on the business interests of President’s Biden’s family, to “understand the extent of the Biden family’s use of its connection to the President to enrich itself.”

At one point, as Webber was grappling and “dancing” with Davletshin at the gallery, Webber “made it rain” by throwing around dollar bills.

“It was making an allusion to the money that might be exchanged there in the future,” the artist explained.

That said, he offered of Hunter’s art, “You know, it’s not as bad as I thought it would be. It’s got tinges of Miro and abstract expressionism.”

Conservative blogs, though, are playing up Hunter’s “straw-blowing” art technique, goofing on his history of snorting coke.

“Hunter Biden himself seems like he might be a fun guy to hang out with,” Webber said. “The problem is, if he’s offering access to his dad, he’s part of the cover-up…of whatever they’re covering up.”

Webber was arrested and charged with assault, graffiti and mischief, all misdemeanors. However, he retorted that he was, in fact, the one assaulted. He said Bergès, the gallery owner, “punched” him.

Webber was handcuffed and taken to the First Precinct, where he was interrogated by Secret Service agents.

“I did not answer any of their questions,” he said. “I toyed with them.”

He was then taken to the The Tombs down by the courts and held for a total of 21 hours. There were cheese sandwiches all over the place in the common cell he shared with some other guys.

He pled not guilty to all charges.

After being arrested eight times at Donald Trump rallies, Webber, as he put it, “became a lawyer by reading a lot of law books” on his own, and now represents himself in court. His court battle with Trump over one arrest, in which he won a $20,000 judgment, is included in his upcoming film, “2020: The Dumpster Fire.”

Webber expects the Soho gallery charges to be dropped.

“If it’s anything like the Art Basel case — I offered to represent myself,” he said. “They just dismissed it, like, within 30 seconds because they just didn’t want to deal with me.”

Correction: Due to a misunderstanding by the writer of the term “gallerist,” the original version of this article referred to Rustam “Jack” Davletshin, the man who held Rod Webber until police arrived, as being one. Although Davletshin works at the gallery, he apparently is is not an owner or curator.