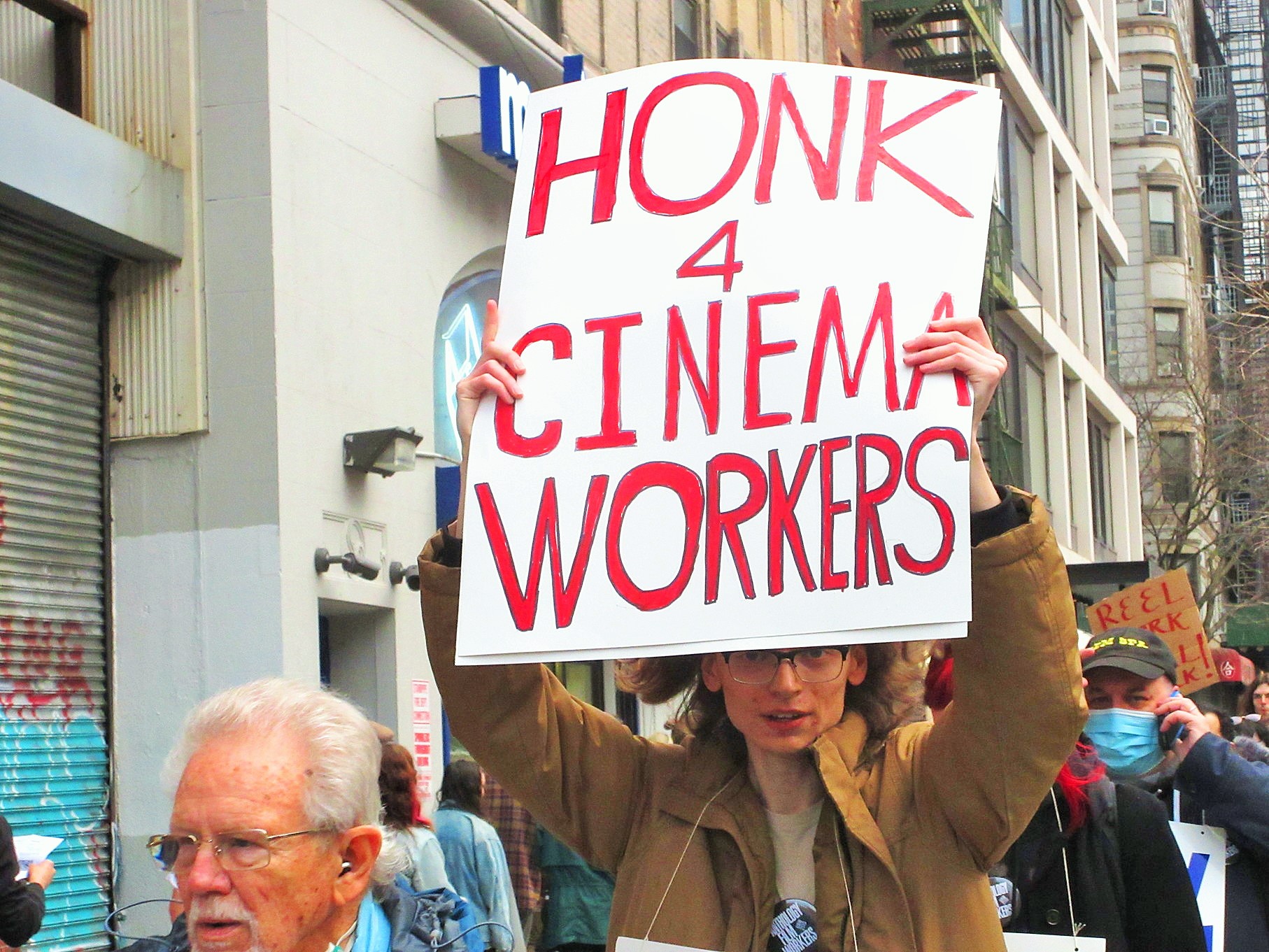 BY DASHIELL ALLEN | Anthology Film Archives workers went on strike this Thursday, demanding that their bosses pay them a living wage and sign their first union contract, which they have been negotiating for the past seven months.

“What do we want?” “Contracts!” they chanted, marching in a circle along the sidewalk on Second Avenue as dozens of cars and trucks honked their horns in solidarity as they drove by.

The renownded East Village cinematic institution has, for the past 50 years, been a bastion of independent, avante-garde film preservation and screening, first opening its doors in 1970.

The staff on strike, represented by the technical, office and professional workers union UAW Local 2110, care deeply for Anthology Film Archives. In turn, they told The Village Sun, that’s exactly why they’re on strike — to make it a place that prioritizes its workers.

The union’s demands to the board of trustees are simple: They want all full-time staff to be paid a living wage, higher than the roughly $40,000 they currently earn.

The striking workers are also demanding a full union shop, meaning any future staff would automatically be covered by the union contract, rather than an “open shop,” as favored by the board, which would make future union membership optional. The workers charge that an open shop would “erode the unity and strength” of the union.

“When we voted unanimously to unionize last year, it was to establish a democratic voice at the organization we love,” a statement by Anthology Film Workers reads. “We are committed to making AFA a stronger, more sustainable workplace for all, but we are deeply disappointed by Anthology’s response to our proposals thus far.”

“We have a very dedicated staff here who love this place,” John Clacksman, a full-time archivist at Anthology for the past 10 years, told The Village Sun.

“It’s a real community, and I think that you’re seeing that tonight,” he said, referring to the lively picket line. “There’s no other place like Anthology in the world that’s dedicated to archiving, preserving and presenting the kind of cinema that we do. So it’s crucial that we survive, and I think that this is the way that we’ll survive, by prioritizing workers.”

“I believe strongly in a democratically run workplace,” said Dave, a part-time evening theater manager. “The workers should be able to make collective decisions for the betterment of improving the workplace. We’re here because we love Anthology. We want to make it a better place not just for ourselves but for everyone who will work here in the future, and we’re fighting for that kind of sustainability.”

Anthology actually is prioritizing institutional sustainability right now — just not necessarily with its workers in mind. The film center is raising funds for an expansion project that would add a new library, cafe and film vaults.

“Although the Anthology Board is fundraising for a capital expansion project, they have refused to prioritize the living wages for dedicated professional staff who make Anthology what it is,” the union’s statement reads.

The Anthology workers’ protest took place the same day as a pivotal union vote for thousands of Amazon warehouse workers on Staten Island, which as of this writing was still in the process of being counted — with the pro-union Amazon workers leading by an almost 400 vote margin over workers opposing unionization.

Other Lower Manhattan workforces recently voting to unionize include the Starbucks Reserve Roastery in the Meatpacking District and the REI Soho outdoor gear and apparel store.