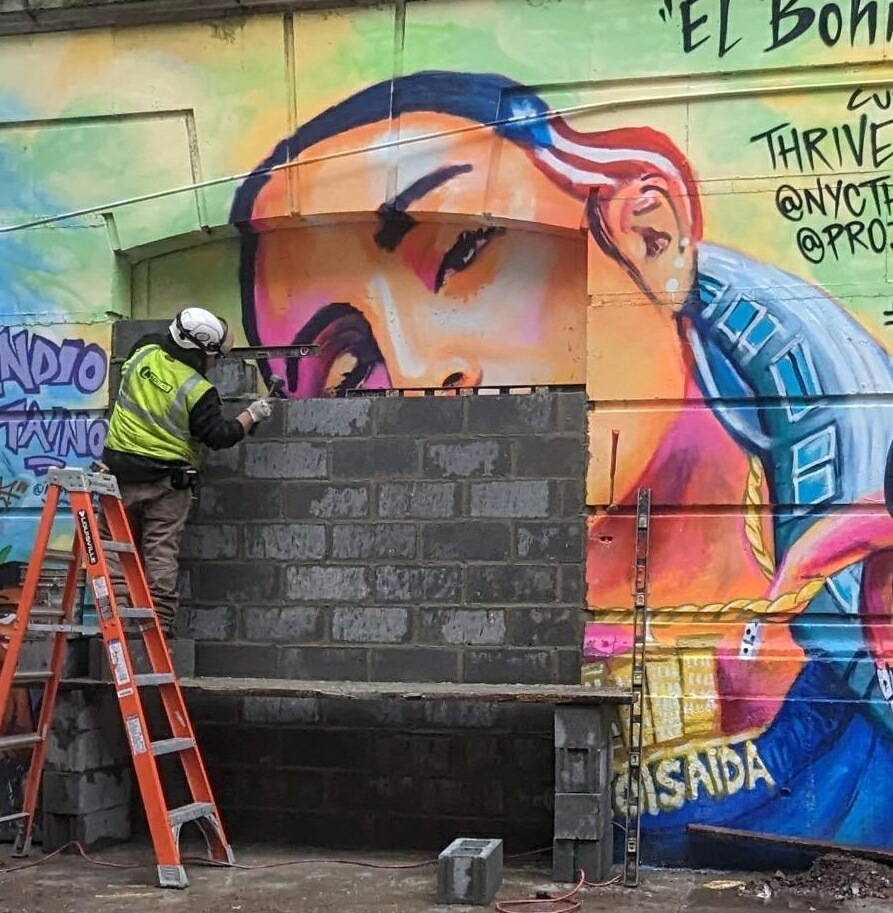 Another brick in the CHARAS mural wall

A city worker on Monday was putting cinderblocks over part of the new CHARAS/El Bohio mural on the E. 10th Street side of the old P.S. 64.

The city recently has been sealing up the massive, vacant building — which runs through the block to E. Ninth Street east of Avenue B — to keep youths from getting inside and partying and doing TikTok videos and graffiti.

The arched area that was being bricked over appears to be a doorway. An emergency Zoom meeting was planned for Tuesday at 8 p.m.

The Village Sun first reported more than a year ago that young people had been cavorting inside the place.

Speaking at a Save CHARAS rally in November 2021, Laura Sewell, director of the East Village Community Coalition, said, “Kids have repeatedly been seen climbing into the building. They pose for selfies, stand on parapets and unstable window cornices. The city must take action before another tragedy occurs.”

Following that rally, Rachel Menaham, who lives next to the old school, told The Village Sun that people had been getting inside it and going wild, and also that the premises was not being maintained.

“Young boys climb up onto [the scaffold] and look into my apartment,” she said. “Every day they’re breaking stuff in the classrooms. They’re making videos inside there on TikTok. They’re destroying things. I hear them cursing, saying horrible things. I’m afraid they might start a fire. This whole block is in danger.”

More recently, as the building slipped into foreclosure limbo, the ad hoc group Guardians of Loisaida (formerly Guardians of CHARAS) formed to protect the old P.S. 64, including from what they said was a threat of arson. Made up partly of former East Village squattters, the D.I.Y. direct-action group danced around the idea of occupying the building, if necessary. In response to which, Susan Howard, the leader of Save Our CHARAS Community Center / Old P.S. 64, told The Village Sun that, if need be, the building would be sealed.