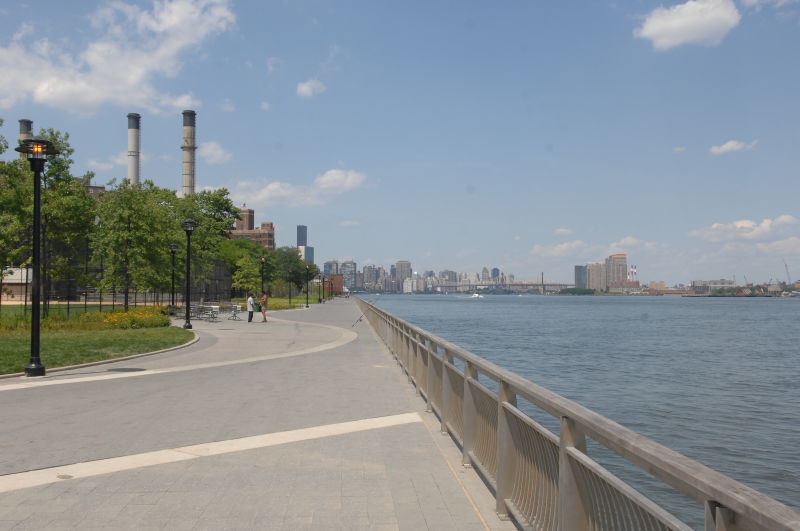 BY LINCOLN ANDERSON | Opponents of the city’s plan to demolish East River Park in the name of flood protection will announce the filing of a lawsuit on Thurs., Feb. 6, to stop the project.

The lawsuit will be filed by Greenwich Village attorney Arthur Z. Schwartz, of Advocates for Justice, on behalf of East River Park ACTION and 90 other plaintiffs.

The suit argues that the state Legislature must first vote on whether to “alienate” the park from public use for three years or more for the project, which would bury the park under a new 8-foot layer of dirt to raise it above the floodplain. (For more on alienation, click here and here.)

In response to community opposition, the city has conceded to do the project in phases, so that parts of it could remain open. But that hasn’t mollified the plan’s critics.

The $1.45 billion flood-control project would bulldoze the largest park south of Central Park starting in fall 2020. It would then take at least three years — but the critics predict it would likely take five years or more, considering the city’s history with park construction — to secure the neighborhood from storm surges.

Thousands of park users have demanded immediate interim flood protection and a revision of the plan to cause minimal destruction of the park.

“We have to sue to stop this plan. It’s clearly a violation of state law to destroy the park,” said local gardens activist Charles Krezell, who organized the legal efforts with East River Park ACTION, a grassroots neighborhood group.

Commenting on the amount and variety of groups in the suit, Krezell, said, “This is just a reflection of the community and how they’ve treated us. We feel we cannot trust the city at this point. Otherwise [without litigation], we’re at the city’s whims.

“We don’t believe they’ll get it done in three years,” he scoffed of the coastal resiliency project.

More to the point, the opponents say the East Village and Lower East Side need immediate interim flood protection, but it’s not happening. Specifically, Krezell noted, the city isn’t moving forward quickly enough on creating flood barriers for another segment of the resiliency plan — along the waterfront between 25th and 14th Sts. — which would defeat the whole purpose of raising East River Park.

“We’re still going to be vulnerable from floodwaters coming down from 23rd St.,” he warned.

He explained that, in his understanding, during Superstorm Sandy in 2012, the storm surge came in at 23rd St., washed through Stuyvesant Town and then flowed down into the East Village.

“The police car floating on Avenue C at Eighth St. — that was water coming down from 23rd St.,” he said of the infamous photo of a bobbing patrol car. “It flooded Stuy Town and that area and it stopped at Sixth St. The water didn’t come from Avenue D. — that area was flooded because the sewers backed up.

People are also worried that the East River Park project would spark gentrification, he said.

“Because they’re saying it’s going to be a ‘world-class park,'” he said, predicting, “There’s going to be infill [buildings]. That’s our paranoia, of course — get rid of the poor people.”

He was referring to the city’s plan to build so-called infill residential high-rises — which would be partially market-rate — on parking lots and basketball courts in New York City Housing Authority complexes under the so-called Next-Gen NYCHA plan.

Another big concern for the neighborhood is that local youth won’t have anywhere to play sports and hang out if the park is under construction for years.

“There’s going to be a lot of kids getting in trouble,” Krezell predicted. “That park is the Hamptons of the East River for a lot of kids. It’s free. There’s no place else to go.”

The city has been making an effort to add and beef up playing field space in other local parks, but Krezell said it won’t equal what would be lost in East River Park during the construction.