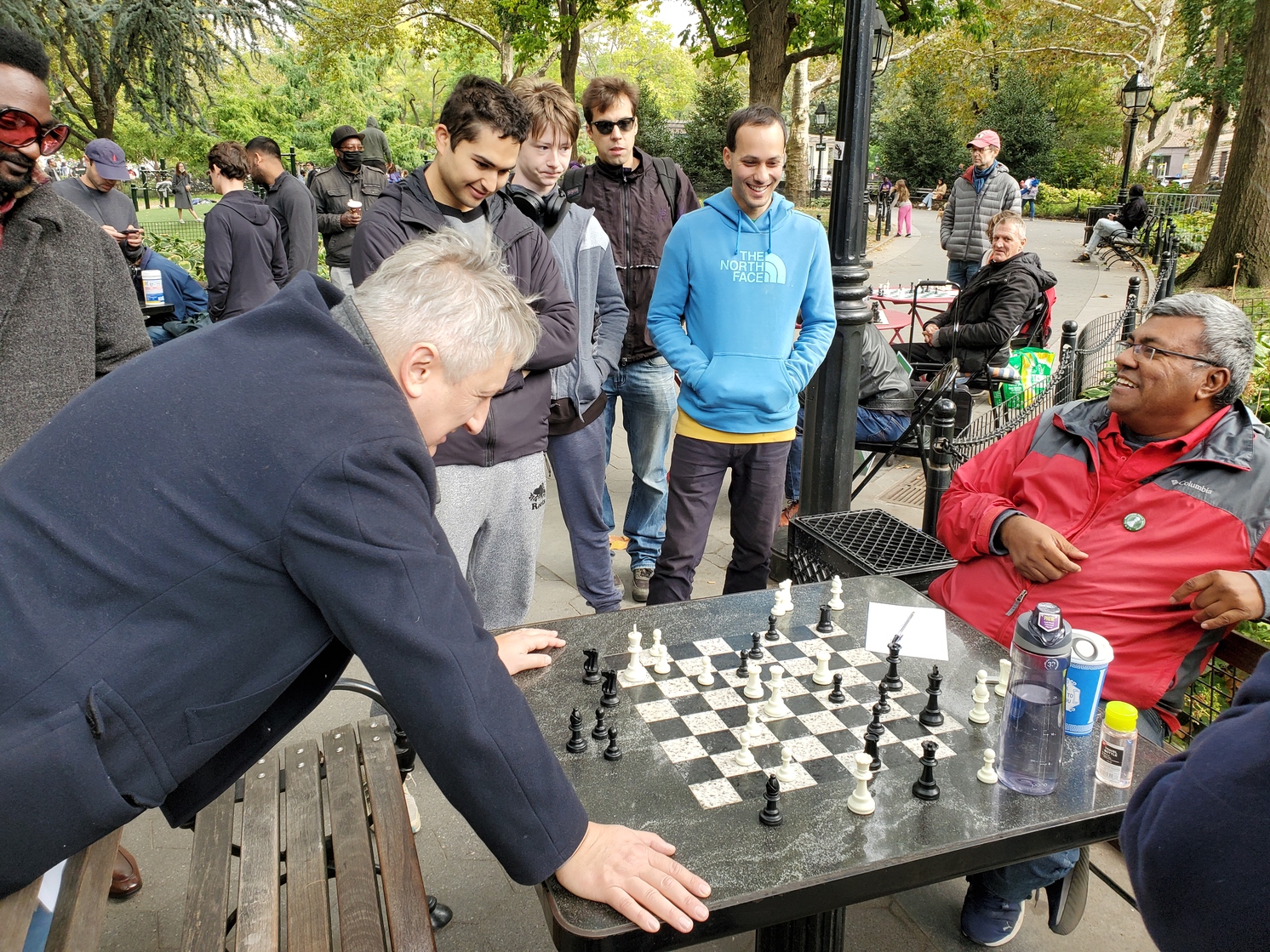 Maxim Dlugy contemplated the board against Surfi, who took Dlugy to 60 moves before losing at last year's Washington Square chess simul. (Photo by The Village Sun)

BY THE VILLAGE SUN | Will the next Bobby Fischer be discovered when chess players of all ages once again test their skills against a grandmaster in the annual Washington Square Park Chess Exhibition?

Actually, maybe Fischer’s heir already has been found. At last November’s inaugural park chess-apalooza, Connor Liao, a 9-year-old Greenwich Villager, was one of only two challengers to play grandmaster Maxim Dlugy to a draw, when the latter simultaneously competed against two-dozen opponents.

Liao will be back — and one year older — at this year’s “blitz”-style match, which will see a different “Grandmaster Flash,” John Fedorowicz, zip around from chess table to chess table, taking on a total of 23 players at once.

The action will all happen Sat., Oct. 22, from noon to 4 p.m., in the chess plaza in the park’s southwestern corner. Billed as an “afternoon immersion in chess strategy,” things will kick off with a lecture by Fedorowicz, followed by the “simul” (Fedorowicz playing 23 challengers simultaneously) at 1 p.m.

The chess-travaganza is free to the public. All ages are welcome to participate in the simul, with five spots reserved for players age 12 and under.

Grandmaster Fedorowicz will donate a free lesson to anyone who plays him to a draw and two lessons if he is checkmated.

A Bronx native, global chess champion and author, Fedorowicz became a force in American chess a decade before being dubbed a grandmaster. He has won five World Open titles, plus many international victories, and was inducted into the U.S. Chess Hall of Fame in 2009. Fedorowicz is active in New York City’s chess community, teaching chess to children and giving private lessons.

This year’s park chess event is dedicated to the memory of James Polshek, the world-renowned architect, who died at age 92 on Sept. 9. A longtime Greenwich Village resident, Polshek was a Washington Square Association board member for decades.

“The true importance of architecture lies in its ability to solve human problems, not stylistic ones,” Polshek believed, infusing those humanist values into the buildings he designed. Among his notable projects were the Museum of Natural History’s Earth and Space Center, the Carnegie Hall renovation and the Clinton Library.