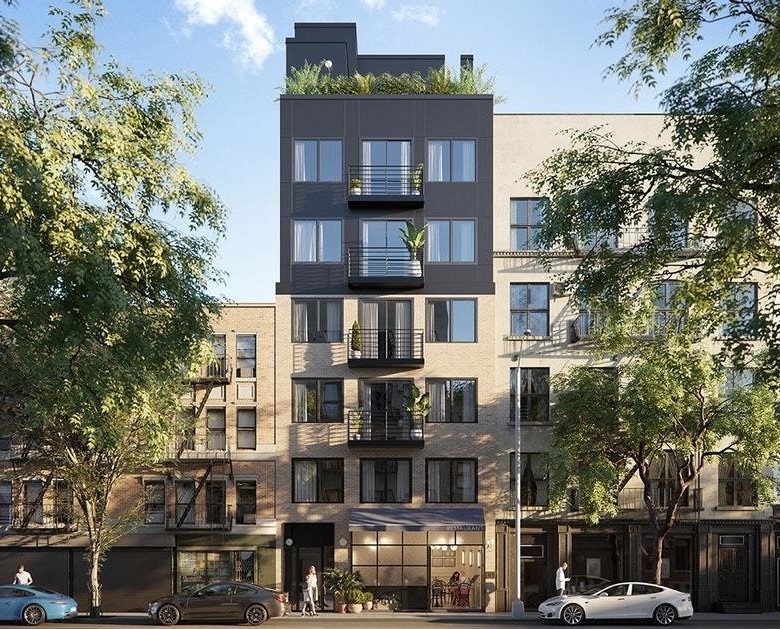 A woman died after falling off the roof of the Topanga, at 202 Avenue A, center. This image that was put out when the building was being marketed includes a building to the left of it that is not there.

BY LINCOLN ANDERSON | Following the fatal fall of a woman from a reportedly packed rooftop party in the East Village early Saturday morning, local politicians and neighbors are calling for ramped-up safety enforcement on rooftop events.

Police said that a 24-year-old woman fell from the top of 202 Avenue A, between 12th and 13th Sts., around 3:10 a.m. Saturday morning. She landed at the bottom of an airshaft between two buildings.

Officers from the Police Department’s Emergency Service Unit removed her to Bellevue Hospital, where she was pronounced dead.

According to a police spokesperson, the woman lived on Delancey St.

The spokesperson first said, “She was near the edge of the roof and lost her footing,” then added, “They believe she was trying to climb from one rooftop to another rooftop and then she fell.”

He said it was not clear who placed the 911 call about the incident. No foul play is suspected and an investigation is ongoing.

The woman’s name has not been released to the public. However, a second police spokesperson said the department does not give out the names of people who die in falls from rooftops.

The building at 202 Avenue A was recently gut-renovated and expanded horizontally and vertically and dubbed the Topanga.

In October, The Village Sun exclusively reported about a 23-year-old woman who was at a rooftop birthday party at 60 E. Third St. and fell over the edge — but miraculously survived, at least initially, after plunging 60 feet. Police confirmed that the woman fell, and a witness told The Village Sun about watching from his window as firefighters extricated the unconscious victim from the bottom of the airshaft. But the newspaper has been unable to find out anything more about the woman.

Meanwhile, on Sunday at 10 a.m., Councilmember Carlina Rivera, Assemblymember Harvey Epstein and members of Community Board 3 and the North Avenue A Block Association will hold a press conference outside 202 Avenue A.

They plan to call for the City Council to hold hearings on legislation by Rivera to address tenant and landlord neglect of rooftop events, as well as for an official review of the lack of agency enforcement by the Department of Buildings, Department of Environmental Protection and the Police and Fire departments of dangerous rooftop parties in Manhattan.

In a press release, they said, “This event is just the latest in a string of documented and reported weekly parties that far exceed safe occupancy levels and often feature concert-level amplified sound on a series of East Village rooftops. Partygoers have even recently been reported to be jumping from rooftop to rooftop during these gatherings. Elected officials have sent letters to City Hall and building managers, but agencies have failed to respond to these hazardous conditions. Community boards have followed up directly with the appropriate agencies but have received inadequate answers.”

The press release described the Avenue A rooftop party as having been “dangerously overcrowded.” However, the New York Post reported that, according to a witness, the party had about 20 people, and that the woman had been trying to climb from 202 Avenue A to 200 Avenue A when she fell.

Rivera is working on two bills to address the issue. One, which has been introduced, would require tenants to sign and acknowledge their understanding of the city’s noise codes. The second bill, which is planned to be introduced soon, would require better oversight of rooftop use and capacity.

The problem isn’t just confined to the East Village. In Chelsea, members of the W. 15th St. 100 and 200 Block Association complain they have been facing a problem with overcrowded rooftop parties at 233 W. 15th St., and that it’s actually been an issue for most of two decades.

According to the block association’s Stanley Bulbach, the rooftop at No. 233 has been a concern ever since the landlord converted it into a party spot for the six-unit building in 2003. The rooftop space, he said, is “a 100-year-old flammable structure, has a history of barbecue use and fire, insufficient horizontal emergency escape and unanswered questions about the strength of existing construction to safely hold five dozen or more tipsy people dancing.”

The party space is open for use 24/7 but totally unsupervised, Bulbach said. Yet, building management is well aware of the rowdy and crowded bashes, he said, since the super and his wife collect the empty bottles and cans afterward to recycle them.

There was a fire at the place in December, according to Bulbach. However, just three months later, a neighbor was outraged to see revelers right back at it again, playing “ping-pong beer” against the rooftop barbecue.