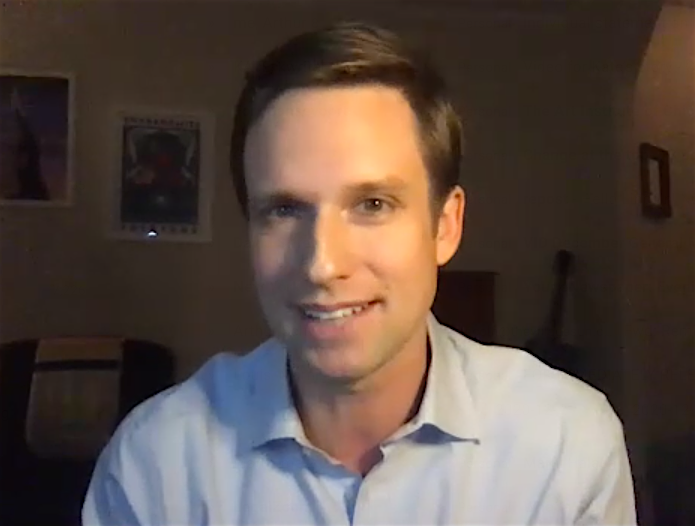 BY THE VILLAGE SUN | Updated Sat., Dec. 12, 4:30 p.m.: It wasn’t exactly your typical endorsement meeting, but Erik Bottcher on Thursday evening won the overwhelming support of the Village Independent Democrats in the race for City Council District 3.

Out of 79 total votes cast, Bottcher took 71. After serving as chief of staff for Council Speaker Corey Johnson for the past six years, Bottcher just a few days ago stepped down from the job to focus on his campaign.

District 3 stretches from Greenwich Village up to Hell’s Kitchen. Johnson has to step down at the end of next year due to term limits.

Margaret Chin, who has represented District 1 for 11 years, will be term-limited at the end of 2021. Li has been her chief of staff for the past two years.

East Village Councilmember Carlina Rivera, who is running unopposed in the District 2 Democratic primary election, won V.I.D.’s endorsement with 64 votes against 13 votes for “no endorsement.”

Adding some unusual drama to the endorsements, however, Bottcher was the only District 3 contender who participated in the candidates forum. The five others in the race jointly decided to boycott the affair. About a half hour before the start of the meeting, they released a joint statement explaining the reason for their decision.

Schwartz, in his district leader’s report to the club, read the statement aloud over Zoom.

“Unfortunately, the nomination process of V.I.D. is compromised,” the statement read, in part. “V.I.D. and other Democratic club endorsement processes are unfairly biased in support of one candidate. There are suggestions that a candidate who is a member of the executive leadership of V.I.D. played a role in determining which questions were going to be asked from the floor.

“As candidates, we must fight to ensure that the Democratic Party endorsement and nominations process is not reduced to the appointment of a preselected candidate without the fair and equitable representation of all campaigns and candidates in fora where candidate positions can be fully fleshed out.”

Halasa, though, was disappointed that Schwartz actually read the statement to the club, slamming it as “grandstanding.”

Bottcher is, in fact, currently a member of the club’s executive committee and was formerly a V.I.D. vice president.

However, David Siffert, the club’s outgoing president, who led the virtual meeting, dismissed the charges as unfounded. He noted that, during the question-and-answer sessions with the candidates during the forum, he has no idea what sort of question club members will ask when he calls on them.

In an e-mail to The Village Sun shortly after the five candidates issued their statement and before the meeting’s start, Siffert said, in part, “The idea that a community organization would be biased because a member has been involved in that community seems an unfair analysis of the situation. Certainly, no one should be able to steer their own endorsement process, and Erik did not design or even give input on the forum structure or any aspect of it.

“I don’t know who V.I.D. will endorse tonight, but I do know that the choice will not be dictated by any inside cabal of which any candidate is a part. The vote will be open and fair and decided by V.I.D.’s large membership.”

Cameron Krause, one of the club’s incoming co-presidents, said he was at the club’s executive committee meetings where they organized the candidates forum and “saw no malfeasance.”

Some club members shrugged that the five disgruntled District 3 candidates just must have sounded out V.I.D.’ers, learned they lacked support and then decided to stage a “stunt” — or a “stupid stunt,” as the club’s Sara Kimbell scoffed.

“The timing makes it look as if these other candidates did their calls, knew they would lose, and then decided to claim unfairness,” former District Leader Keen Berger typed in the Zoom chat section.

Tony Hoffmann, a former V.I.D. president, later explained to The Village Sun that there is nothing improper in Bottcher’s being on the club’s executive committee. The club’s bylaws simply state that if a person holds a patronage job or is elected to office (not counting district leader or state committee), then he or she cannot have a leadership role in the club.

Bottcher did not respond to a request for comment on the five challengers boycotting the candidates forum before the club’s vote.

In his three minutes to speak to the club before the vote, Bottcher said it’s a dire moment for New York City due to the pandemic and that he wants to help with the city’s recovery.

“People haven’t paid rent in eight months,” he said. “Sammy’s Noodle Shop and the High Line Diner have closed.” He might have been referring to the Rail Line Diner.

“Thirty-one of the 51 councilmembers are going to be new,” he noted. “We’re going to need people with experience and vision.”

Bottcher said his experience will serve him well, noting, “I’ve learned how the levers of government work.”

He said, if elected, he would fight against systemic racism and work to decrease the city’s reliance on fossil fuels, among other things.

“The theme of our campaign is ‘New York’s best days are ahead,'” he said.

During the Q&A, Krause asked Bottcher what things he would and would not continue that Johnson currently does.

The candidate said that, like his former boss, he would focus much of advocacy on helping the needy, constituent services and tenant events.

However, he said, while Johnson is more of a delegator, he personally likes to be more directly involved in constituent services.

Asked by another club member, Chloe Chik, where he differs with Johnson on issues, Bottcher mentioned the city’s Open Restaurants program.

“I am my own person,” he said. “I’ve worked for him for six years, but Corey and I are very different people. I support making outdoor dining permanent, but I wouldn’t have done it so quickly,” he said. “I think it’s a great program. But there are questions about enforcement and how it’s going to look. I think we could have worked this out before it was made permanent.”

Bottcher also said he would fight for accessible transit and specifically for making the city’s taxi fleet accessible.

Finally, he said, “I propose a playground for children with disabilities at Penn South. … I’m going to make that happen.”

Bottcher said there is an “underutilized” spot in Penn South where the playground could go.

Before the club members voted, they had a discussion about the candidates. Bottcher and Schwartz, who is also a V.I.D. member, are the best known of the six contenders, at least in the Village, and are clearly frontrunners.

Gil Horowitz used a lunch-date scenario to sum up his feelings.

“I certainly would have lunch with Erik,” he said. “Though I would learn a lot about community activism and lawsuits from Arthur.”

John Bredin made a strong pitch for Schwartz, who, like him, is a big Bernie Sanders supporter. In fact, Schwartz was Sanders’s New York campaign counsel four years ago. Bredin noted that the Village attorney also represented the high-profile community organizing group ACORN “before Fox took it down.”

“His progressive credentials are unbelievable,” he said of Schwartz. He added that the veteran politico is an intellectual, which is in line with Greenwich Village’s great history of intellectualism.

After the meeting, Schwartz said that candidate forums should be more in-depth and lengthier, otherwise members will just vote for the candidate who “has the most friends” in the club. On the other hand, he said, “The Progressive Action of Lower Manhattan (NYPAN) endorsement process was a two-hour forum, moderated by Assemblymember Harvey Epstein — with 10 questions. Interviews that I have had with unions have lasted from a half hour to an hour. Black Lives Matter put me through an hour.”

As first reported by The Village Sun, Schwartz was recently endorsed by Black Lives Caucus, the political arm of Black Lives Matter of Greater New York.

However, Hoffmann said, to Schwartz’s critique of the V.I.D. event’s format, as a political veteran Schwartz surely knows this is simply how these endorsements are usually done.

And James Yates made another good point in the chat section during the meeting, noting that just finishing first isn’t everything anymore. As he wrote: “Arthur: Unfortunately, I think you and the others are throwing away a real opportunity. With ranked choice voting (in the primary), it is important to get 2nd-place votes as well as 1st. Even if you believe V.I.D. has an apparent favorite, this was a chance to rack up 2nd-place support when the real election takes place.”

The Village Sun asked Schwartz who had the idea first to boycott the club’s endorsement process.

“I don’t know,” he answered. “I got a call at around 3:30 p.m. from Dante, Leslie and Aleta together. Then Marni joined the call, at my suggestion, and when they all agreed, I felt that it was the right thing to do. I felt bad because I consider David Siffert to be a really good guy who tries hard to be fair, but I agreed that a 10-minute slot, some of which included the questioner, which will probably be the procedure at Chelsea and Hell’s Kitchen Dems, wasn’t really allowing for a serious debate.”

Chelsea Reform Democratic Club and Hell’s Kitchen Democrats have yet to endorse in the race.

Schwartz said, if it had been up to him alone, he would have participated in the process and spoken to the club about his candidacy and his long record of activism. But, he said, he felt it was important to show unity with the other candidates against a process to “anoint” Bottcher.

“I had my statement ready,” he said. “But I though the statement the other four wanted to make was important, too. I have been standing up to the political establishment for years; and though David Siffert is a great guy, V.I.D.’s core leadership is really just a part of the mainstream political establishment — like endorsing Biden in February when Bernie had him up against the ropes, or supporting Kathy Hochul vs. Jumaane [Williams for lieutenant governor].”

Halasa subsequently released a video in which she questioned the “integrity” of V.I.D.’s endorsement process — plus hammered fellow boycotter Schwartz.

This is my personal statement about the events that took place tonight, surrounding the controversial decision by Arthur Schwartz to use the candidates’ joint statement for shameless self-promotion. @TheVillageSun @amNewYork @mlrock912 https://t.co/AhralPYhMV pic.twitter.com/6NY5cIs4QV

Despite Halasa’s criticism, Schwartz said he did not think his talking to the club gained him a single vote.

For his part, Hoffmann, speaking after the meeting, said he was disappointed at the boycotting candidates’ effort to “devalue” Bottcher’s win.

“It was very Trump-like,” he charged. “When [Schwartz] made that accusation in that letter with no evidence, it’s Trumpian.”

Also during the meeting, Krause and Mar Fitzgerald were elected V.I.D.’s new co-presidents, succeeding Siffert. Club members showered the modest but sharp Siffert with kudos and praised his tenure.

Horowitz called Siffert “the best ever.”

“You lifted us quite high on your shoulders,” Hoffmann told Siffert. “You’re a true believer, and you’re doing it for the right reasons.”