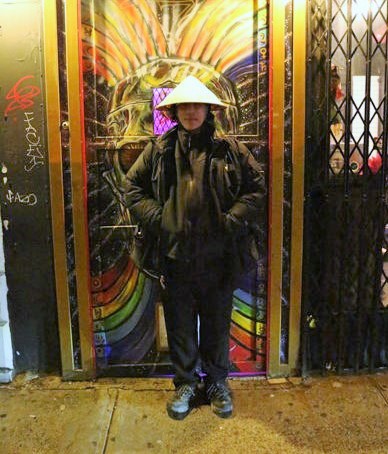 BY LINCOLN ANDERSON | Updated June 10, 12:30 a.m.: Trigger is known for many things. He was the owner of the Continental, the East Village punk-rock venue that was a labor of love, and a favorite place for his friend Joey Ramone to perform. In 2006, he turned the club into a high-profile cheap-shots bar, finally making some money on the place. Like Slash, Bono and Madonna, he’s mononymous: Trigger. And, of course, he’s known for his signature conical Asian farmer’s hat.

Now the former punk-rock impresario is adding another cool item to his résumé — ice cream.

From conical hat to cones? … To quote from “Young Frankenstein,” “It…could…work!”

The Continental was forced to close in 2018 after its location was slated for a new office building. Now Trigger is bouncing back with a string of ice cream shops called Lucky Star, all opening this summer.

The first is opening at Clinton and Delancey Sts., two doors down from The Delancey, the popular three-level music club.

The next will be on bustling St. Mark’s Place, between Second and Third Aves., next to 2 Bros. Pizza.

Both of these two locations will be small, with to-go windows only. You won’t be able to go inside them.

The third Lucky Star will be in what’s become known as “Dimes Square,” at Canal and Division Sts. Trigger, who recently relocated to this hip neck of the Lower East Side from Avenue A, is really excited about this spot. It will be his local and, at 700 square feet, will have space for tables and chairs inside. There will also be seating outside.

“That’s special to me,” he said of the Dimes Square scooperie. “It will be my home base.”

He might even hold a weekly open mic there, he said, since it can hold 30 to 40 people.

He likes that the intersection is also home to “Skaters Triangle.”

“It’s a constant hangout for everyone, not just skaters,” he said. “That’s one of the reasons I chose that location. It’s the last bohemian neighborhood in Manhattan: cafes, galleries, hip hop. Everyone’s very friendly. Great community. I want to add something positive.

“I’m over babysitting drunken millennials,” Trigger reflected of his stint running the Continental as a cheap-shots dive bar. “And I’ve never seen anyone act like an entitled douchebag from eating too much ice cream. … I see people lining up outside ice cream shops. I don’t see them lining up outside bars.”

Trigger remains proud, though, of the Continental’s legacy as a music club.

“I wouldn’t change those 15 years for anything,” he reminisced of the rock club. At the same time, he said, “Those days are over for me. I’ve got hearing damage.”

In addition to ice cream, there will be Italian ices and crème ice — a hybrid of hard ice cream and Italian ice — plus sundaes and milkshakes. It will mainly be soft serve. Trigger said he is currently “figuring out” whether he will also be offering hard ice cream, though he said there will be hard vegan ice cream. Most of the offerings will come from a Long Island distributor. There could potentially be soft-serve vegan ice cream, which would require its own machine; this decision will be based on demand, he said.

The Division St. location is being done up in furnishings from the ’50s, which, he noted, is his favorite decade for design and decor.

“Tony Zito will do some ’50s atomic art on the walls, abstract and geometric prints,” he said. “It won’t be a cheesy Johnny Rockets joint but it’ll be done right. Less is more,” he added. “It won’t look brand new. It want it to be subtle but cool.

“Wait till you see the ’50s-style storefront that Stefan Harshman is designing. He’s building all three of my spots and he’s simply brilliant and amazing.

“And my old friend Steve Lewis will DJ the opening,” Trigger added of the Dimes Square spot. “He’s been through a lot but through sheer force of will and plenty of hard work he’s come back from the brink, God bless him.”

In addition to ice cream, one part of the Lower East Side location will also offer microwaved edibles, like hamburgers, hot dogs, soup and coffee.

“Sort of a cafe/snack bar hybrid,” he explained.

Trigger may have an announcement soon on the type of hamburgers, as well. He’s working on bringing in an iconic local brand.

Due to the size and layout of the Division St. storefront, he went back and forth on whether to have wine and beer, but now plans to offer them.

Not surprisingly, given Trigger’s involvement, there will be tunes.

Trigger was open to locating the stores in other neighborhoods, and noted he looked at spots all over Manhattan. But it just worked out that he landed the trio of local storefronts.

“I’m so happy that I found these three locations down here,” he said.

In fact, he hopes to open a total of five ice cream places and is currently working on plans for two more spots.

So, Trigger is ready to rock, and will be rolling out the three ice cream places throughout the summer.

“This is my new chapter,” he said. “I’ve moved. I lived on Avenue A for a long time. I’ve started a new business. I don’t think things happen by accident. This is coming together for a reason.”