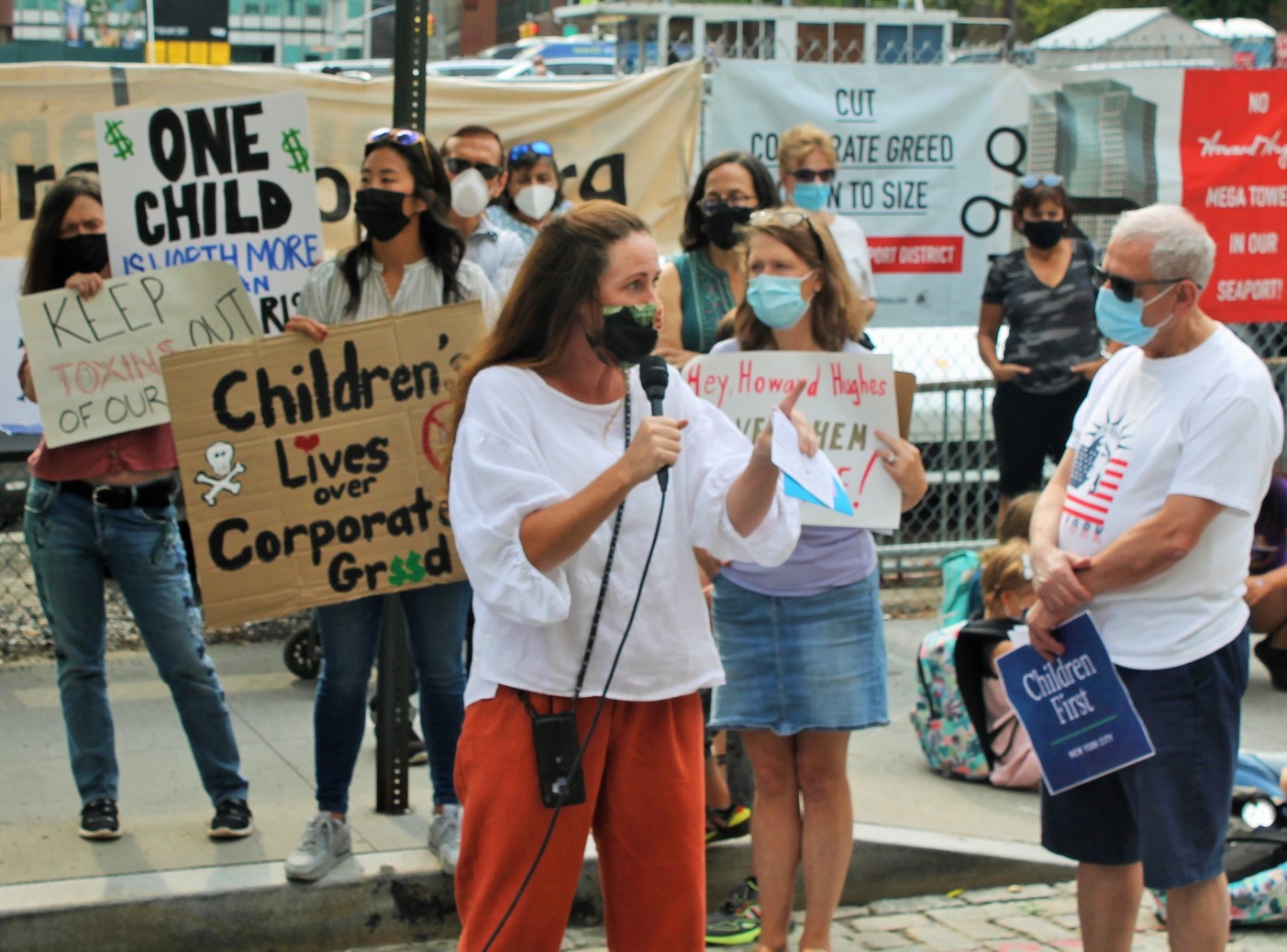 "This is not O.K.!" Megan Malvern fumed at the press conference outside the Peck Slip School. (Photo by The Village Sun)

BY LINCOLN ANDERSON | Temperatures are boiling in the South Street Seaport area as a developer hopes to start cleanup of a toxic former thermometer-factory site bordered by three schools and a heavily used play street. That this is happening amid the alarming COVID resurgence has thrown local parents into a panic.

Tuesday afternoon, parents and schoolkids, joined by Congressmember Jerrold Nadler and Comptroller Scott Stringer, rallied outside the open-air parking lot at 250 Water St. where Howard Hughes Corporation plans to construct an oversized residential tower. The site is within the South Street Seaport Historic District and zoning allows only a 120-foot tall building. But on May 4, the city’s Landmarks Preservation Commission approved the zoning-busting Hughes project, at 324-feet tall, as “appropriate.” A previous design by the developer had called for an even more enormous 470-foot-tall building. Shortly after L.P.C.’s approval, the Seaport Coalition sued to block the project.

On Tuesday, the opponents said H.H.C. is now pushing forward to start the cleanup of the toxic brownfield by January. According to the local activists, this was once the country’s largest thermometer factory and the underlying soil is drenched with toxic elemental mercury.

They argued that the site remediation should not be allowed to proceed until the design for the proposed building has been finalized. The building project is currently going through the city’s “ULURP” public review process, which can take half a year or more.

But the opponents say the de Blasio administration is pushing to get this embattled project —  like a slew of other similarly contentious ones schemes the city — approved before the developer-friendly mayor is term-limited out of office.

Nadler and Stringer urged that the brownfield cleanup not be allowed to begin in January. Nadler, specifically, said he opposed “the rushed start” of the remediation before an approved building plan is in place.

“Safety must be paramount, safety must be first,” Nadler stated, “especially when it involves children’s potential exposure to toxins and other contaminants. We cannot rush…to start digging and ask community leaders to weigh in then without providing final building plans first.”

He called for extending the public comment period for the tower plan until at least Oct. 15.

Stringer said, “The existing plan for a new development on this contaminated site threatens the well-being of thousands of children, senior citizens and the whole Seaport community. The current plan must be enhanced to protect our children’s safety and allow for the community’s concerns and needs to be voiced and addressed throughout the process.”

A representative for Chris Marte, the Democratic nominee for Lower Manhattan’s First Council District, read his statement opposing the start of the brownfield cleanup and criticizing the construction project.

“I stand with Children First in calling on the Department of Environmental Conservation to extend the public comment period to Oct. 15,” Marte said in his statement. “Community organizing is what has held Howard Hughes accountable every step of this process — and Howard Hughes has felt the heat.

“Releasing the remedial action work plan on the last day of school, and requiring responses at the start of the school year is their latest trick that the state has turned a blind eye to,” Marte charged. “Howard Hughes has identified the weakness of organizing in schools, summer vacation, and exploited this in order to try to skip another step of transparency and accountability.”

“This is not O.K.!” said Megan Malvern, who has a son at the Pick Slip School, P.S. 334, saying that H.H.C. hopes to plow ahead with the health-jeopardizing project due to “corporate greed.”

Along with Grace Lee and Emily Hellstrom, Lee is a founder of Children First, an ad-hoc group fighting for the safe cleanup up of the toxic lot.

District Leader Vittoria Fariello, a mother of four children, slammed the “false narrative” that she said the mayor and the developer have been spinning about the plan’s critics.

A green, cinder-block parking garage, which is used by the F.B.I., currently sits at 2 Howard St. Meanwhile, the tower planned at 5 World Trade Center — one of the last undeveloped sites at the World Trade Center — is currently slated to contain just 25 percent affordable housing, or 330 apartments out of a total of 1,325. Local residents, including those fighting the Soho/Noho rezoning, along with Community Board 2 are urging that both sites be used for 100 percent affordable housing. They are being backed up by local politicians, especially on the 5 W.T.C. site.

“We can build a building that’s 100 percent affordable housing if there’s truly a will to do so,” Fariello said of 5 W.T.C.

While the Hughes project’s design calls for affordable housing, it does not require it, opponents stress.

“The false narrative is that locals are fighting affordable housing and to preserve their views,” the district leader said.

Hellstrom, a Soho parent and activist, said, “This is about a big developer, [H.H.C. Chairperson] Bill Ackman, saying, ‘We can do what we want.’ This is about us saying, ‘No.'”

As Hellstrom said after the press conference, right now the toxic lot is “safe” because it is paved over. If remediation started and the soil became exposed, toxic particles would be released into the air.

“This is a play street,” Hellstrom stressed of the quiet cobblestone road where the rally was held. “Three schools are on the border of a toxic site — Peck Slip School, the Blue School and the Pre-K Center. Southbridge Towers is a NORC, a naturally occurring retirement community.”

“This is our play street. This is our playground,” she stressed, adding, “[COVID] protocols require that we open all the windows. This was the largest mercury factory in the country. Three thousand six hundred trucks would be carting this stuff away.”

Hellstrom and other opponents said that, although H.H.C. had claimed the mercury at the site was organic, they researched it, made H.H.C. do a soil test, and confirmed that it was the more toxic form, elemental mercury.

Lee, who ran against Assemblymember Yuh-Line Niou in the Democratic primary, said the remediation and the disruptive construction project would be disastrous for young students.

“Our kids have been sedentary for 18 months,” she said. “They’re not in the best shape. I am tired of our children being treated as collateral damage, first by this pandemic and now by the Howard Hughes Corporation.”

That H.H.C. could even consider building a tower of this height was only achievable by a convoluted air-rights scheme. The developer plans to use city-owned air rights from Pier 17, in exchange for which it would give $50 million to the South Street Seaport Museum. Although air rights cannot be transferred across streets, the city demapped some streets in the area in the 1980s, which would allow the transfer.

Afterward, Malvern said the fear is that H.H.C. will try to start remediating the brownfield site as a way to force the pouring of the foundation for the new tower. In other words, once the site is opened, it would eventually have to be sealed, and pouring the tower’s concrete foundation would achieve that.

“H.H.C., in my opinion, will use the remediation to get into the ground and terrorize the school and neighborhood with an open pit,” she said. “It will make parents who are currently against the project want to support it just to get it over with. It will also give H.H.C. the advantage tactically to build and pour a foundation that will support the nearly 400-foot tall tower they want to build, which gives them the leverage to build to that height irrespective of legal battles and judgments that might strike down the 400-foot-tall project.”

A Howard Hughes Corporation spokesperson, in a statement, emphasized the affordable housing part of the plan, noting that the area is affluent, while adding that the project would only be “temporary.”

“The broad array of supporters in the neighborhood and across the city for the 250 Water St. project understands the clear need to transform this parking lot into a development that includes approximately 80 permanently, deeply affordable apartments in one of the city’s wealthiest areas, along with critical funding for the beloved South Street Seaport Museum,” he said. “In addition to voluntary participation for the site in the Brownfield Cleanup Program, overseen by the New York State Department of Environmental Conservation and Department of Health, the project is subject to a comprehensive environmental impact review, and we will closely coordinate with community stakeholders and all relevant government agencies to ensure public safety and to minimize the temporary effects of construction on the surrounding community.”

He added that during construction, H.H.C. would implement emissions- and noise-reduction measures that exceed code requirements; a hazardous-materials Remedial Action Work Plan and Construction Health and Safety Plan approved by state D.E.C.; and a comprehensive site-safety program.

Meanwhile, Community Board 1 issued a statement opposing the Water Street project and expressing concern over the parking-lot remediation:

“Manhattan Community Board 1 has been on record many times in strong opposition to the Landmarks and City Planning Commission applications for the proposed Howard Hughes Corporation development at 250 Water Street,” the board said. “The proposal represents an egregious departure from years of carefully crafted regulations meant to guide the growth of low-scale, contextual development in the Historic Seaport. CB1 is extremely troubled by this precedent-setting proposal which seeks to remove the hard-fought zoning regulations of the Seaport Historic District.

“The community is concerned that the Brownfield Cleanup Program of the site, adjacent to two neighborhood schools, are adequately addressed.

“There is critical concern and uncertainty with nothing in writing by the City to guarantee the Seaport Museum’s endowment (at $50 million or any other level), or the [museum’s] pledged John Street expansion as a result of this proposal.