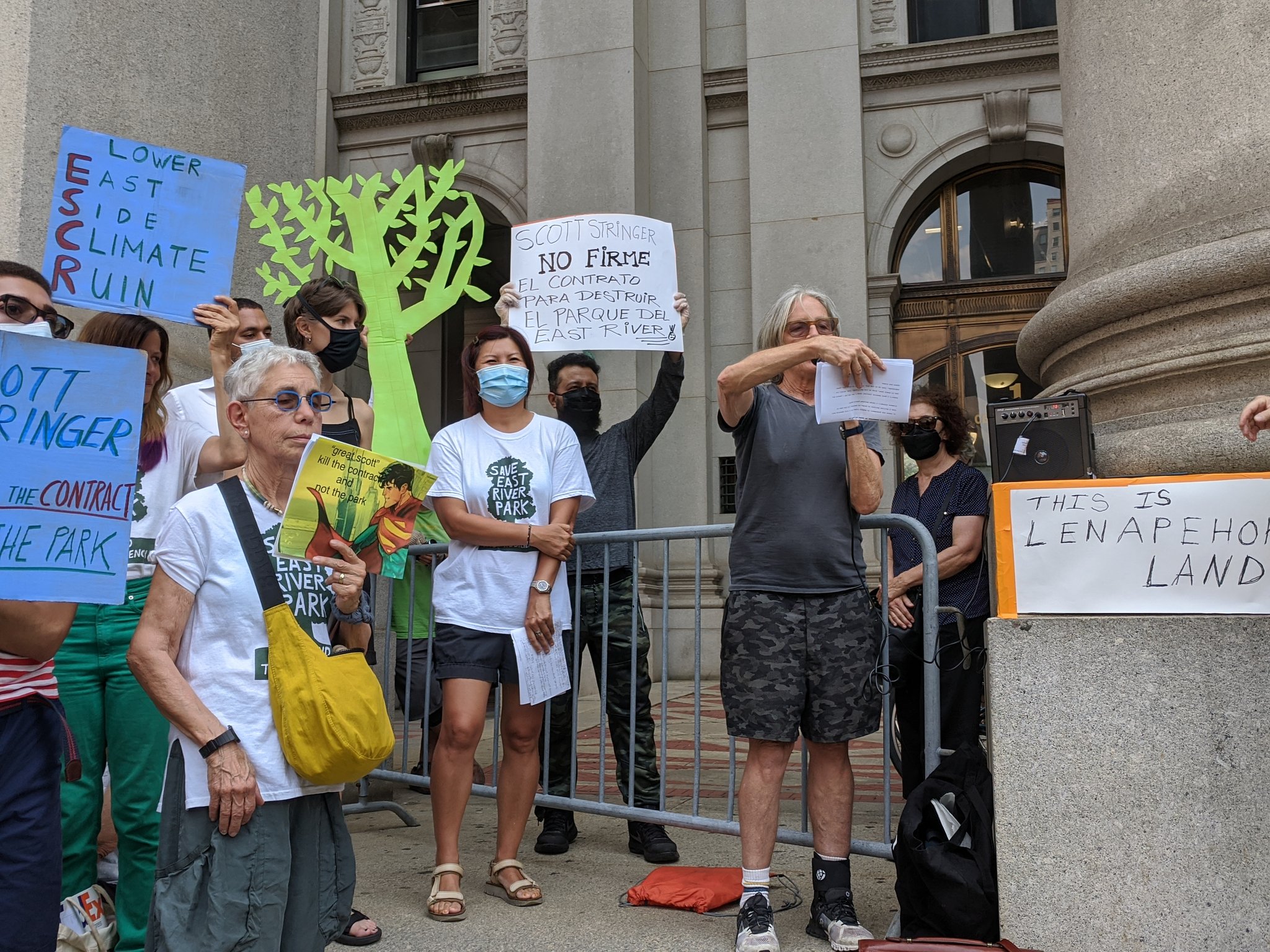 Poet Eileen Myles read a statement at a rally Tuesday at which park advocates urged Comptroller Scott Stringer not to approve a contract for a resiliency megaproject that would destroy the existing East River Park. (Photo by Kirsten Theodos)

BY LINCOLN ANDERSON | Return to sender — from Stringer.

Comptroller Scott Stringer thinks a nearly $1.3 billion contract from IPC Resiliency Partners for work on East River Park needs work — so he has sent it back to the Department of Design and Construction.

Hazel Crampton-Hays, the comptroller’s press secretary, said the contract has been returned due to “outstanding issues.”

“As is the case with every contract,” she said, “the Comptroller’s Office has conducted a thorough review and engaged with the City through a series of questions and answers to determine compliance with all applicable rules and regulations pertaining to this $1.2 billion contract. Since we were unable to resolve all of our questions within the 30-day review period, our office has returned the contract to D.D.C. to allow them additional time to address the outstanding issues.”

IPC was the lower of two bidders for the East River Park part of the East Side Coastal Resiliency project, which is backed by Mayor de Blasio and the City Council.

The Village Sun has learned that Stringer had two specific issues with the contract.

First, D.D.C. reportedly has not ensured that all of the companies comprising IPC, which is a joint venture, have filed all of the required disclosures in the city’s PASSPort system, as required by the Procurement Policy Board rules and the New York City Administrative Code.

Second, D.D.C. reportedly set a 16 percent Minority/Women-owned Business Enterprises (M/WBE) utilization goal for the $1.27 billion contract — despite the city’s publicly stated goal of 30 percent M/WBE utilization for city procurement under Local Law 1 — with D.D.C. stating that this was the maximum percentage of the contract that could be subcontracted. However, IPC itself reportedly indicated that 32 percent of the total work could be subcontracted. The Comptroller’s Office is asking why D.D.C. has not adjusted the M/WBE goal to be higher.

Meanwhile, on Tuesday, park activists rallied outside the Municipal Building, hard by the Brooklyn Bridge, hoping Stringer would hear their plea. They called on him not to sign off on the contract for the resiliency megaproject, which would bury the beloved East Side park under tons of landfill to raise it up to 10 feet and close it in sections for a few years, if not longer.

Christopher Marte, the Democratic nominee for Lower Manhattan’s City Council District 1, urged Stringer, “Throw away the pen! Save the trees, save the planet and save the people!”

Did Stringer hear them? It’s not immediately clear. However, he did, in fact, do what they asked — refrain from signing the contract.

If Stringer eventually does O.K. the document and a “notice to proceed” is then issued, IPC could begin prep work for the demolition of East River Park — including cutting down almost 1,000 mature trees — in order to build a giant levee over the 46-acre site.

Tommy Loeb, a member of East River Park ACTION, said it’s great that the comptroller held off, for now, on approving the contract but that, clearly, it’s not necessarily the end of the story.

“We’re just happy now that we got to this point and there’s a delay,” he said.

Loeb noted that D.D.C. recently released another couple hundred pages that were previously redacted of the Value Engineering Study, which compared the current E.S.C.R. project to an earlier design. The earlier version, which had community buy-in, would not bury and raise the park.

Loeb said the E.S.C.R. opponents are now busy sifting through these newly released pages for any evidence to help their case. Speaking of which, the opponents have a court date in September for their legal appeal against the resiliency project.