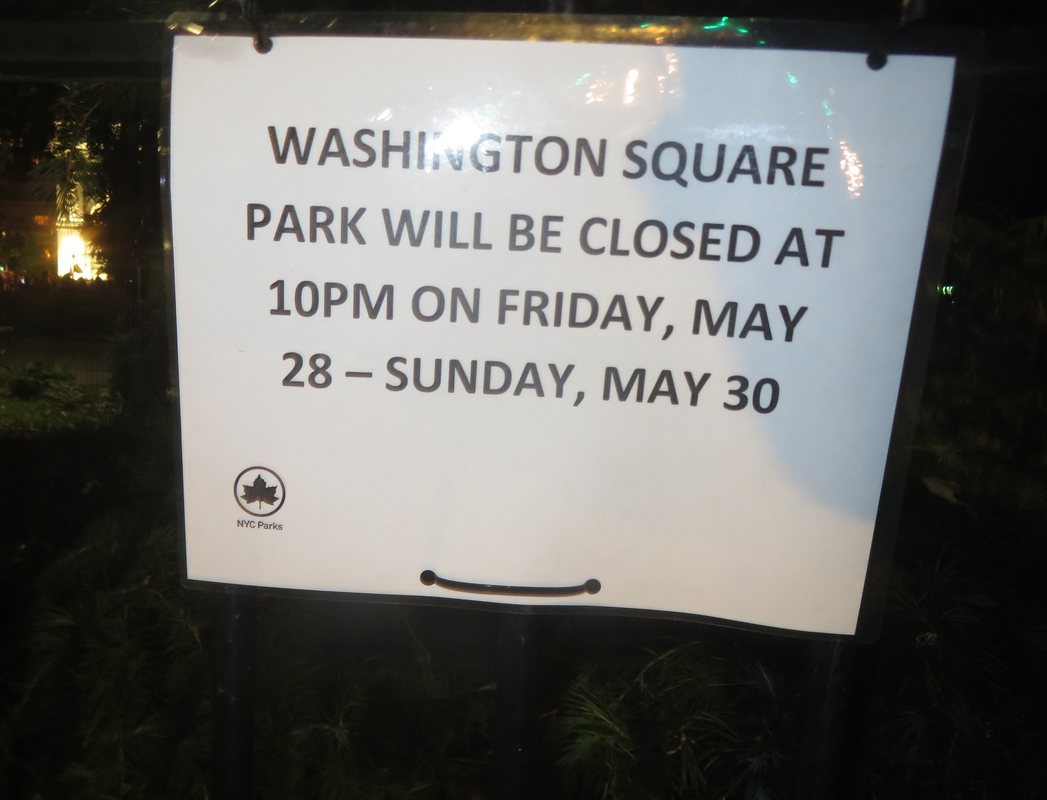 Washington Square Park will be closing early this weekend in a new approach by the Parks Department. (Photo by Everynight Charley Crespo)

BY LINCOLN ANDERSON | It looks like the party’s over. …

That is, at least after 10 p.m., at least for the next few weekends and — who knows? — possibly longer.

The Parks Department recently posted notices in Washington Square Park announcing that it would be closing the park early every night this weekend.

A Parks spokesperson confirmed in an e-mail to The Village Sun: “Washington Square Park will close at 10 p.m. this Friday, Saturday and Sunday responsive to large gatherings, amplified sound and other conditions in the park on weekends. Our Parks Enforcement Patrol (PEP) officers are collaborating with N.Y.P.D. and we will continue to adjust our approach as needed.”

“The park was comparatively calm last night as I walked through it about 11 p.m.,” he reported. “I saw the usual drum setup south of the fountain, a crowd of young people dancing to a boom box east of the fountain, and lots of throngs of youth everywhere else, but I did not feel the wild ‘spring break’ fever I frequently encounter there after dark. If the typical party scene is blazing tonight and a large force of uniformed Parks or police personnel attempt to empty the park at 10 p.m., this action could provoke a violent response. I am not exaggerating that I fear a police riot tonight.”

On the other hand, Crespo said, it looks like rain for tonight, so maybe there might not be a big crowd.

In addition, the police have cordoned off the park’s northwestern corner, which has been the scene of an entrenched drug problem for years. This area will be fenced off for a few weeks, except for Wednesdays, when there will be children’s activities there.

Also, the park’s bathrooms will be shuttered for a week for some plumbing work, which could help curb drug issues, at least in the short run. Junkies reportedly have been going into the men’s room stalls and shooting up and nodding out, leading, in some instances, to long waiting lines.

People selling things in the park, not necessarily drugs, is an issue, too. So are skateboards, scooters and bikes, none of which are allowed in the park, though parts of Washington Square often look like a skate park.

In terms of the curfew, police launched the new strategy last Friday, with a 20-person detail of riot helmet-wearing cops arriving at the park around 6 p.m. They initially focused on not letting people use amplified sound, forcing them to break down their equipment setups.

A permit is needed for amplified sound in the park.

Later on, as the park’s curfew neared, the cops closed off Fifth Ave. south of Eighth St. and started pushing people out of the park toward the south. But it took longer than expected to empty the park, so now the plan is to close it at 10 p.m.

While it was understood that during COVID people needed a place to go and let off steam, the crowded, amped-up park scene has been going on for a year and neighbors’ tolerance is frayed.

Neighbors hoped that after New York University’s graduation ceremonies were over things would calm down, but the park party has rocked on. In fact, things were apparently ready to reach new heights tonight. Postings on social media said that #adrianskickback, the same guy behind a huge party in Huntington, California, last weekend that drew thousands of teens and made national news, was encouraging a large unorganized party in Washington Square.

Graffiti and vandalism of the fountain have been problems, too. Someone reportedly put detergent in the fountain, to create bubbles, and also red dye, which is hard to clean out of the pipes.

A crowded dance party in Washington Square Park on Thurs., May 20.

Things reached a head last week. There had been a dance party in the park last Thursday night, followed on Friday night by a car flying a Palestinian flag and doing screeching donuts on Washington Square North in front of the arch, apparently celebrating the Israel-Gaza ceasefire.

Please share widely to show the insanity of the moment we’re in. This is Washington Square Park, NYC. pic.twitter.com/7rw1Onee5r

Meanwhile, locals have been flooding Community Board 2 and local politicians with “template letters,” outraged manifestos demanding enforcement of the park’s rules. The Village Sun, for example, received an e-mailed copy of one “fed up” letter, below:

“We are the neighbors, residents, businesses, taxpayers, associations, stakeholders, and voters in the area immediately around Washington Square Park. Our goal is to bring awareness to our elected officials, community associations, and city agencies that we will no longer tolerate the illegal activity within WSP and spilling out into the immediate Greenwich Village neighboring areas.

“We are calling on our local authorities, elected officials, Mayor’s Office, candidates, community agencies, judges and district attorneys to take immediate action. We won’t tolerate this regular, overt, illegal and detrimental activity. We won’t let this happen in full view of our children’s playgrounds. We are raising public awareness, protest and engaging media attention to bring a prompt remedy to this situation. We, as your constituents, are unified and mobilizing and we’re not letting this go until the park is returned to a safe and pleasant environment for us all.

“We will VOTE YOU OUT, if you don’t take immediate substantive action and let this condition continue. We will continue to bring public awareness and build support of this issue. We will not let this issue rest!”

On a Saturday night a couple of weeks ago, two supervising police officers from Manhattan South were standing next to their squad cars on Washington Square North, just outside the park. They had been assigned to tail a transgender rally that had earlier marched over to the place from Hudson River Park.

Asked about all the amplified music and skateboarding going on in the park, one of the officers shrugged, “We just do what we’re told to do.” But he expressed sympathy for locals dealing with the noise. Nodding up at the tony apartment buildings on Fifth Ave., he said, “I would hate to be up there.”