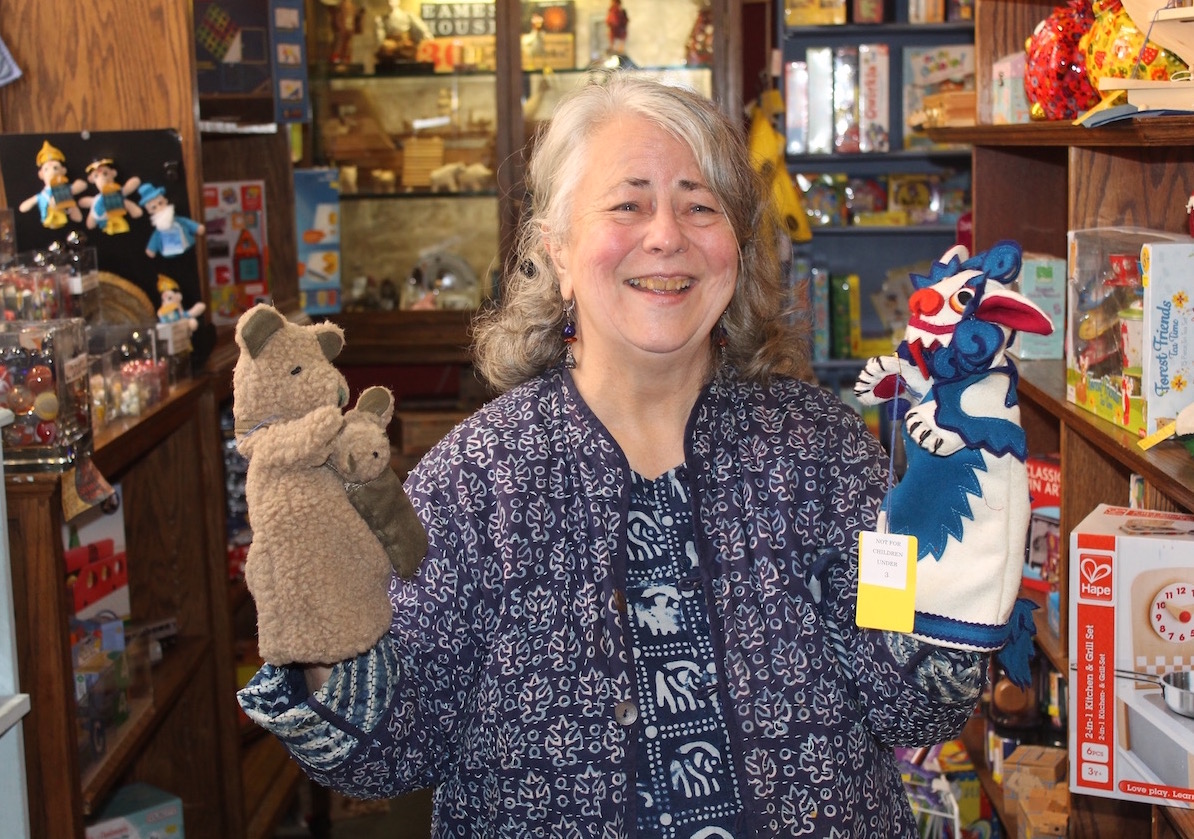 Give her a hand (puppet): Pam Pier at her Dinosaur Hill store in the East Village. (Photo by The Village Sun)

BY LINCOLN ANDERSON | Updated Wed., Nov. 11, 1:30 a.m.: After a terrific run of 37 years, Pam Pier will be closing her East Village toy and kids’ clothes store, Dinosaur Hill, at the end of this month.

Veselka restaurant, next door, will be picking up her lease and expanding into the 625-square-foot space; that includes 450 square feet on the ground floor, plus Pier’s small loft-like office overlooking the store, which she romantically refers to her as her “aerie.”

Actually, Veselka took over part of her store once before and then helped her out by renovating the space that she had left.

It’s been heart-wrenching for Pier to make the decision to close. She just turned 77 a few weeks ago and she has had a few health issues. But the store, on E. Ninth St. just east of Second Ave., has been a central part of her life for nearly four decades and it’s hard to let go.

For the first 15 years or so of running Dinosaur Hill, Pier worked the floor long hours, from 7:30 a.m. to 11:30 p.m. each day. After a knee operation slowed her down a bit, she has been perched up in her aerie more. Longtime employee Naomi Machado runs the downstairs.

Pier recently spoke to The Village Sun in said aerie, surrounded by a menagerie of puppets, children’s books and a stuffed dragon that she likes, “by Hansa,” she noted.

“I’m having nightmares every night,” she said. “I’ve been working since I was 12. … I’ve been feeling at sixes and sevens.”

In her dreams, she’s trying to get home, get to the store, carrying packages… .

“I couldn’t go through the whole thing of another Christmas,” she said. “I’d have to hire temporary staff.”

She paused from the interview to answer a call from a supplier, telling her that she was no longer buying.

“I have to restrain myself from ordering stuff,” she noted after hanging up. “But my accountant says, ‘Don’t order.'”

Pier’s story began out West in the Black Hills of South Dakota, where she grew up in Rapid City. Her mother was an artist and art teacher and her father sold Nash cars. Pier’s dad suffered from polio, though, and died when she was just nine months old.

Her store’s name also traces it origins back to Rapid City.

“The W.P.A. had built five life-size dinosaurs on the hills that run right through the spine of the city,” she said. “Everyone used to go up there.

“My major job growing up was working in the Black Hills Reptile Gardens — ‘the largest collection of reptiles on the North American continent,'” she said with practiced gravity.

She went on to study writing at the State University of Iowa, though finished up at Goddard in Vermont. In Iowa she had a boyfriend from New York City.

“That was my passport,” she said of her former flame. “I’d always wanted to come to New York.”

She stayed here for a few years, then went back to Iowa, then returned to the Big Apple again. This time she stayed for good.

“For about five minutes, I had my license to teach,” she recalled. “Then I did freelance art.”

Through working at the school, though, she met the family that ran Muddie’s, an East Village toy store. She eventually took over that business in 1983 and redubbed it Dinosaur Hill.

The longtime E. 10th St. resident has seen the neighborhood transform over the years.

“I think it’s less rough,” she said of the East Village, though adding, “But there was [recently] a scaffold at Second Ave. and Sixth St. and there were people camped out there doing things. There was a lot more shoplifting [before].”

One constant, though, is Pier’s love for handcrafted toys and items.

“I’ve always been intrigued and fascinated by handcrafted creations and I’ve always loved selling objects that people can touch,” she said.

On the other hand, no pun intended, she’s not into the virtual.

“I see people with kids who are 2 or 3 with devices in their hands,” she said, incredulously.

Keeping with its owner’s tech skepticism, Dinosaur Hill does not do online sales.

Another constant over the years has been Machado, who was Dinosaur Hill’s first employee. She went on to earn her master’s degree and run the CUNY Language Immersion Program, came back for several holiday seasons, and has now graciously returned to help close the store.

One positive of closing the shop, in Pier’s view, is that now she’ll be able to get out more and reconnect with the neighborhood she so adores. She’s been a member of Green Oasis Garden, on E. Eighth St., since 1991 and plans to exercise her green thumb there more.

Pier is part of East River Park ACTION, the group fighting to save East River Park from a mega-redevelopment plan to bury it under 8 feet of dirt to turn it into a massive flood barrier.

“It’s just heartbreaking,” she said of the $1.45 billion raze-and-rebuild scheme.

But the East Side Coastal Resiliency project, as it’s called, looks to have been delayed from starting this month, pushed off until sometime next year — at least, that is, for the section covering East River Park. So Pier will still have a chance to enjoy the treasured waterfront open space at least a while longer.

In fact, East River Park’s value to the community has never been greater than now during the pandemic since it offers nearly 60 acres for social distancing.

Like other local merchants, Pier’s business has been hit hard by COVID-19. After closing during the lockdown, she opened back up at the end of June.

She got a small loan for “business injury” and a larger loan for the Paycheck Protection Program, which she hopes will be “forgivable,” so she won’t have to pay it back.

“Since it’s been COVID,” she said, “I’ve had some $35 days. … It has been picking up a little as people are hearing about the going-out-of business.

“During the time we had to be closed, I read 14 hours a day,” she said, in amazement. “Mostly mysteries, if the truth be known.”

She still relishes the interactions with customers. Susan Stetzer, the district manager from Community Board 3, recently dropped by the store.

World travel could also be on Pier’s agenda now that she will have more free time. She has previously visited such relatively far-flung countries as India and Tibet.

“I would love to go to East Africa,” she said. “I want to go to Borneo, too; I want to see orangutans in the wild.”

Painting and jewelry making are also things Pier hopes to do. She currently creates gift cards for the store — she enjoys doing them on the computer — and that’s something she wants to continue in some fashion, too.

An illustration she did for the store’s closing now graces Dinosaur Hill’s Web page.

“I have a picture of a dinosaur floating away in a hot-air balloon, playing a flute, with stars for notes and a dodo on top,” she said.

What a way to go!

Dinosaur Hill, located at 306 E. Ninth St., will be open through the end of November. Store hours are Tuesday through Sunday, noon to 5 p.m.; closed Mondays. For more information, dinosaurhill.com.