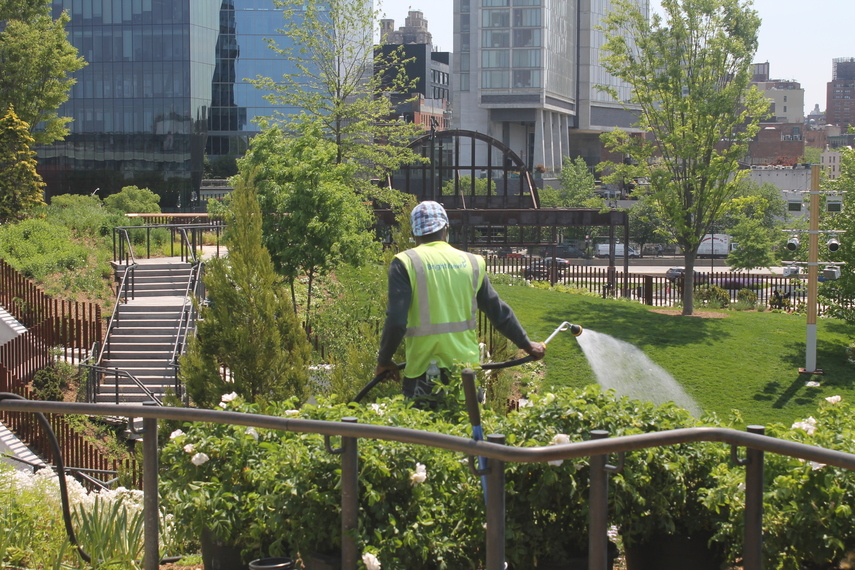 Little Island: A poem with footnotes

rising so high from the grade of the sea,

each pile like a tulip[i], or giant golf tee.

Diller’s[ii] unsolicited present to me

or more of Heatherwick[iv] grandiosity?

put nothing in the Hudson that doesn’t have to be.

rammed through to burnish Cuomo’s[vi] legacy

(before he leaves public office ignobly).

I spared my kind tour guide[vii] the old third degree

and my Villager’s distrust and jerk of the knee[viii].

I so want to trust your philanthropy —

a lovely small park with a college degree,

As sure as your picnickers sip their Chablis

more crowded than rush hour on the I.R.T.

What happens if Diller and von Furstenberg flee[xiii]

who will support you in perpetuity?

Kimmelman[xiv] called you a charmer, I see.

With reservations[xv] required, I kind of agree.

[i] Little Island’s 267 precast concrete piles, fabricated in Virginia and transported by barge, are described as tulips.

[v] According to Benstock, longtime director of the Clean Air Campaign, which devotes most of its energy to protecting the Hudson River: “Lower Manhattan is almost part of the ocean, with gale-force winds and driving rains in a hurricane, smashing everything with corrosive saltwater. There are never no impacts even in calm good weather. That stretch is overdue for a hurricane. The city talks only about flooding, not about the precipitation that is likely. In 2013, a bill was agreed on by a semi-secret task force that includes an indemnification provision. If there’s a hurricane, the Hudson River Park Trust doesn’t have to pay damage claims: The taxpayers pay.”

[vi] In 2017, amid opposition, lawsuits and rising costs, Diller walked away from the project. Governor Cuomo brokered a deal whereby opponents dropped their lawsuits in exchange for a promise to complete the 4.5-acre Hudson River Park, of which the Island is a part, and protect the local estuary. Diller came back.

[viii]  Neighborhood preservationists tried to build a modest, green, self-sustaining public park on the Downtown Hudson waterfront in the ’80s; instead we got a city-state partnership park reliant on revenue-generating businesses, trading of air rights and gifts from billionaires (which can sometimes come with strings attached). I tend to believe, as the preservationists did, that the charm of the existing fabric of Greenwich Village and its history as a mecca for creative artists is ultimately the most enduring tourist attraction.

[x] In the “Amph,” the 687-seat amphitheater, 30 percent of tickets are reserved for free for Little Island’s community partners, 30 percent are for sale on the Web site for $65, and the remaining 40 percent are available for $25 through the Theater Development Fund.

[xii] Officially COR-TEN, the steel is designed to rust over time, with the rust eventually forming an attractive protective outer layer requiring no maintenance. Unfortunately, stains are difficult to remove, and moisture can compromise the integrity of the steel. I hope this doesn’t happen on Little Island.

[xiii] The Diller-von Furstenberg Family Foundation has committed to paying all costs, including the salaries of the 110 employees, but only for 20 years.

[xiv] New York Times architecture critic Michael Kimmelman’s review: “A New $260 Million Park Floats on the Hudson. It’s a Charmer.” He also called it “the architectural equivalent of a kitchen-sink sundae, with a little bit of everything.”