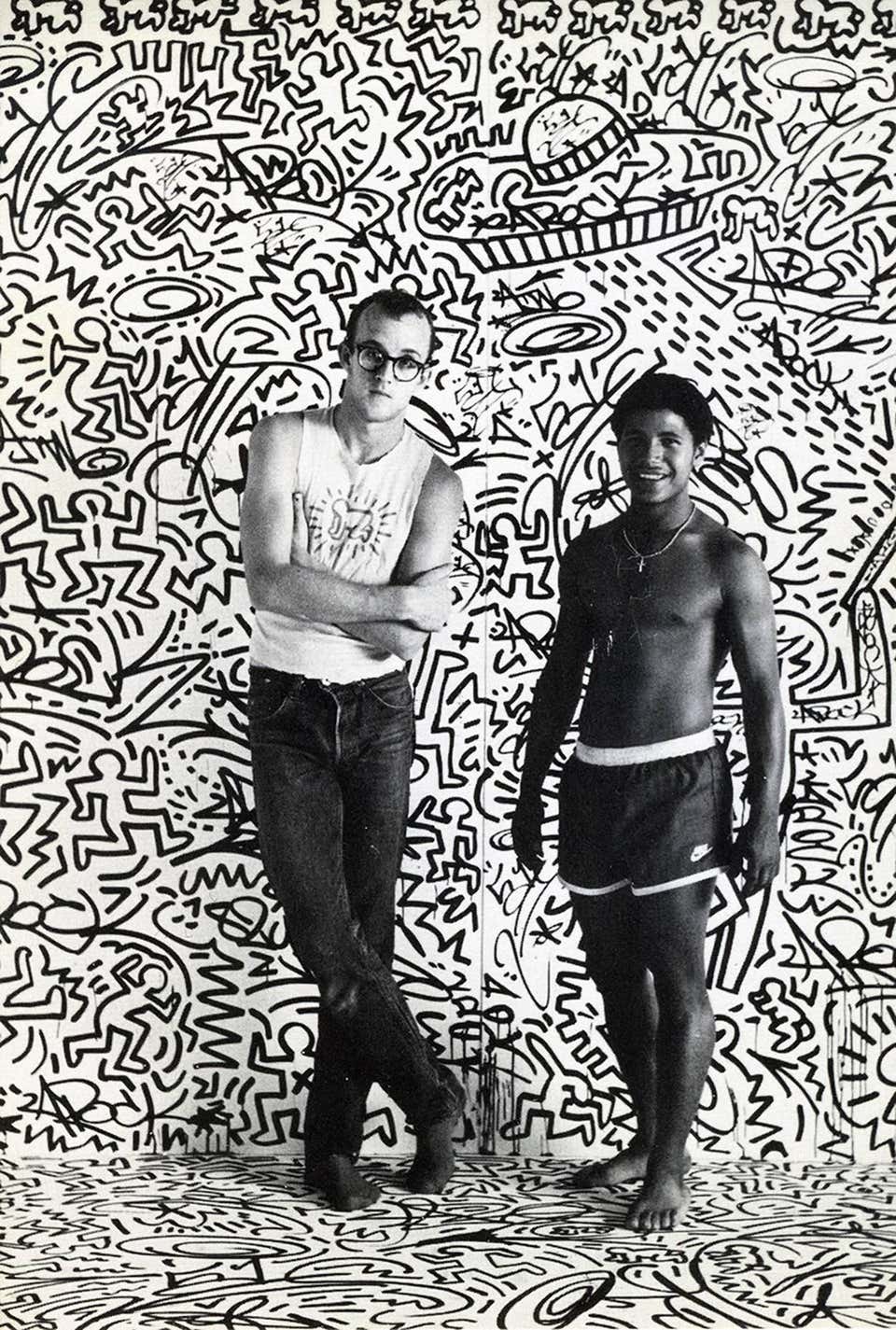 A young Angel Ortiz a.k.a. LA II with Keith Haring in front of a painting they collaborated on. The artwork sold for $1.4 million in 2018 at "The Art of Collaboration Show." LA II added infill squiggles and his "LA II" graffiti tags on Haring's artwork and gave Haring street cred.

LA II deserves his due: Tagger was key to Keith Haring’s art

BY CLAYTON PATTERSON | It is finally time to deal with the problem of Angel “LA II” Ortiz’s exclusion from the Keith Haring legacy.

I want to make the point that Keith Haring is not the problem. The problem did not arise until after he died. Angel always did and still does love Keith. They collaborated many times over the years. Angel was with Haring on his first art trips to Europe and Japan.

It starts from Haring’s very first one-man show. LA II’s work was a major part of this show. Not a mention. He was on the poster and invitation card, a cute, unnamed little brown boy. The photographer, Tseng Kwong Chi, was named. Not Angel. An art critic I was talking to described the poster as being  in the vogue of the time, showing the “noble savage” in art. He was referring to Basquiat and Angel Ortiz.

LA II is from the Lower East Side. He had street cred. Keith was a naive kid from Pennsylvania, new to the city. A gay kid who wore glasses with dabs of paint on them and tight pants. LA got Keith a pass to go to the housing projects and to tag the local streets. He got permission from Rodney, who ran the CBS crew — not the TV station, the LES gang. Rodney also ran heroin from Houston St. to Sixth St. on Avenue D. (On my 8 Ball Radio show, I have an interview with Rodney about his history.)

Keith did a mural on the corner of Houston and Avenue D — the “Robot DJ.” Think about this for a minute, if you remember the old LES. Imagine a new jack white guy running around tagging the ’hood.

For almost 20 years I have not found anyone to deal with this racist issue of the exclusion of Angel Ortiz from the Keith Haring legacy. Nobody of any consequence has the internal strength to step up and deal with this “oversight.”

I did get one answer from Jeffrey Deitch. He said Angel’s contribution to Haring’s art was “work for hire,” not a collaboration.

That is cute. The house helper. That cute factor should have started to disappear once big money started to get involved — finally. There was an Uptown show called “The Art Of Collaboration,” from Sept. 17 to Oct. 20, 2018, at Venus Manhattan Gallery.

Angel was a part of the “Collaboration” exhibition. Not by name but at least by tag, LAII.  One of the collaboration pieces was used for the original poster, which did include LAII. And his graffiti tag was mixed in with a list of others who had tagged on Keith’s apartment refrigerator. The actual refrigerator was in the show.

From the show’s press release:

Meanwhile, the Keith Haring Foundation is playing the same tune.

“We recognize his work and respect the history of his collaboration,” said Julia Gruen, the foundation’s executive director, said of LA II. “He was compensated for all the work he did with Keith Haring, in Keith Haring’s lifetime.”

Look at the art pieces in this article and see if you can pick out LAII’s contributions.