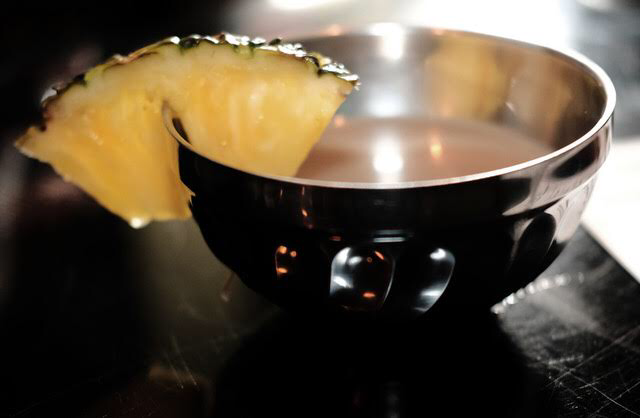 At Kavasutra, kava drinks are served in a silver bowl and garnished with a pineapple slice. (Courtesy Kavasutra)

Kavasutra has been an island of calm amid the COVID storm

BY ISAAC SULTAN | Coping with the stress and turmoil of a global pandemic hasn’t been easy. A recent study by the Centers for Disease Control and Prevention found that nearly one-quarter of Americans reported symptoms of anxiety — triple the number in a similar survey taken last year.

A bar in the East Village, though, is serving up what could be the cure for New Yorkers’ corona-worries — and no, their drinks won’t leave you with a hangover.

Kavasutra opened five years ago at 261 E. 10th St., between First Ave. and Avenue A. Last November, the company unveiled a second location at 45 E. First St., between First and Second Aves. The bar sells beverages made with kava, a natural root popular among South Pacific islanders that is praised around the world for its relaxing effects.

“I think in American society — and other societies, as well — we’re trained that alcohol and drugs are our ‘way out,’” said Rich Haskins, the general manager of Kavasutra’s New York locations. “We’re excited to kind of open up people’s eyes, because they don’t really know that there’s something else out there.”

Taken in small doses, kava has been found to relax muscles, relieve tension and pain, lower inhibitions and promote better sleep, all without the incapacitating side effects of alcohol or the mental fuzziness of marijuana.

“You’re not going to find anyone stumbling out of the bar here, slurring their words or yelling,” Haskins said.

In 2002, the U.S. Food and Drug Administration issued a consumer advisory that kava consumption may be associated with potential liver damage.

Kavasutra sources its kava directly from Vanuatu, where the plant has been used by the island’s native inhabitants for centuries. At the bar, the root of the kava plant is mixed with water and then strained, following the traditional method perfected by the Vanuatuans. The final product is a murky, earthy-tasting liquid served in a metallic bowl (imitating a coconut shell) garnished with a slice of pineapple.

Kavasutra also offers fruit-flavored kava shots, for customers who might not like the taste of kava straight up.

Kavasutra attracts an eclectic and fiercely loyal clientele that has buoyed the bar throughout the pandemic.

“We’ll have people in here from 18-year-old college students to millionaires and everything in between,” Haskins said. “There’s no stereotypical kava drinker — everyone is welcomed and accepted here.”

Pre-coronavirus, the kava bar was lively nearly every night of the week. Customers in the know shout “Malo!” — the equivalent of “cheers” in Vanuatu — before gulping down their drinks.

Despite not offering any food, Kavasutra is technically designated by the city as a restaurant, and it was permitted to remain open during COVID shutdowns, albeit without inside service.

“March and April were a trying couple of months, because we didn’t see any new customers,” Haskins said. “But our regular base is so strong we were actually able to maintain sales even with only takeout and delivery.”

Like many other New York establishments, Kavasutra has now embraced the new era of outdoor dining, outfitting its two locations with socially distanced patio seating on the sidewalk. Haskins reported that business is bustling again.

The general manager said Kavasutra’s continued success even in the face of New York’s shutdown demonstrated the value of kava to the community it serves.

“[During the shutdown] everybody else was running to bars and liquor stores and our customers were basically doing the complete opposite [by drinking kava],” he said. “To me, it showed that we really do make an impact on a lot of people’s lives and help them through whatever they’re facing on a daily basis.”