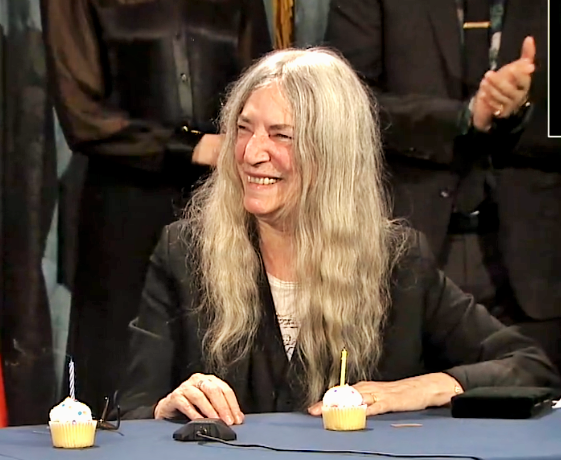 Patti Smith was touched by getting both the Key to the City and a birthday cupcake from the mayor.

Honored with Key to NYC, Patti Smith urges city to ‘save historic streets, gardens and trees’

BY LINCOLN ANDERSON | Mayor de Blasio awarded punk-rock icon Patti Smith with the Key to the City on Monday.

Meanwhile, Smith, in proudly accepting the honor, in turn, offered the mayor and other city leaders some heartfelt, Jane Jacobs-like advice. In short, the singer/songwriter urged the mayor and fellow honchos to place more value on “the small things” that make the city so special, from its historic built fabric to its precious few green spaces, community gardens and trees.

De Blasio, who is now in his final week in office, said Smith’s music, especially her song “Ghost Dance,” was a huge influence on him as a young man, affecting him to his very “core.” He noted her 1975 “Horses” is considered one of the top albums in rock history.

The largest private sector #COVID19 vaccine mandate in America begins TODAY. Join us at City Hall with the latest on COVID-19 and more. https://t.co/EUkmBnZNmF

“The punk movement in general, to me, was a bastion of truth-telling and something that helped address the hypocrisy in our society,” the mayor added. “Some have called Patti Smith, the godmother of punk. … [She] inspired so many people, helped shape a whole movement — a whole artistic movement — and, in many ways, a political movement, as well.”

“It’s awesome,” a beaming Smith said upon receiving the key at the City Hall ceremony.

She later added, with a smile, “I know that we don’t work to gather accolades, but I’m the kind of person that if I get one, I really love it. … I love the key.”

In another warm gesture, the mayor also celebrated the 75th birthdays of Smith and Lenny Kaye, the guitarist for the Patti Smith Group. Monday was Kaye’s birthday, and Smith’s is on Thursday. They each were given a cupcake with a single candle to blow out, with Smith again calling it “awesome.”

Ironically, in her remarks, the punk-rock legend spoke about the importance of protecting what she called the “small things” in New York City, from its historic buildings to its beloved community gardens and trees.

In just the opposite, though, to the horror of many outraged locals and environmentalists, the term-limited Mayor de Blasio, in one of his final acts, recently started totally destroying East River Park. The city plans to fell all of the park’s 1,000 mature trees to clear the way for a contentious coastal-resiliency project. Calling it literal overkill, critics argue that flood protection for the surrounding area could have been achieved without snuffing out every single living thing in the park. Already, however, about half of the park has been clear-cut, in what some liken to a brutal, “scorched-earth” assault.

Meanwhile, a de Blasio-backed housing development is also slated to destroy the Elizabeth Street Garden, despite overwhelming community and political opposition. In fact, in September Smith, Kaye and Smith’s daughter, Jesse Paris Smith, played a concert at the garden at a rally to save the threatened Little Italy green oasis.

Only de Blasio and outgoing Councilmember Margaret Chin among local politicians back the housing plan. Politicians whose districts actually include the garden and/or parts of Community Board 2 support saving the green space, as does C.B. 2.

In her remarks Monday, Smith spoke about coming from rural New Jersey to the city “with nothing” and facing the daunting trial-by-fire test of trying to survive and thrive here.

In shades of Jane Jacobs, she acknowledged that while New York City is about “growth” — both for individuals and the town itself — preservation of the “small things” is also a key part of what makes the city such a special place for its residents.

“With all its challenges and difficulties, it remains — and I am quite a traveler — the most diverse city, to me, in the world [and] the city that has so many possibilities for growth,” the singer/songwriter said of the Big Apple. “But also, as we grow and, again, evolve as a city, I pray that we will also protect our city, its history, its historic streets and architecture, its community gardens, its trees. All of these things we need — we need because they are part of our identity as New Yorkers. Also the Empire State Building, new skyscrapers, progress — but also the small things. That is part of our great city, the small things. So let’s all do our best to protect those small things.”

Speaking of challenges, she assured that New Yorkers will overcome the current health crisis. Just as previous generations went through world wars, “their own pandemic” and the Great Depression, she said, we, too, can overcome our current straits.

“We are navigating heavy seas,” Smith said. “We can do it if we stay strong and grateful… . We’re resilient people. And who’s more resilient than a good, old-fashioned New Yorker?”

De Blasio asked her what her message was to encourage some people who might be feeling “hopeless” amid the pandemic.

Again, she reiterated, it’s “small gestures” and “small things” that, at the end of the day, are what make a difference — whether it be just a smile or “tending to a community garden,” leaving soup for a sick neighbor, picking up litter or “just doing what one can to reduce their own waste, to reduce their use of fossil fuel.”

“That’s what ‘People Have the Power’ is about,” she said, referring to her rousing activist anthem. “Artists, politicians, scientists, we can all inspire people. But it’s the people who make change. And they make change by voting, by helping one another, by fighting for the things they believe in. So, I would say, start with the small things… . Find something every day to be enthusiastic about, to feel encouraged about.”

Smith noted that, though her father read the Bible and other weighty fare, like Socrates and Carl Jung, he firmly believed the most important thing in life was simply to be happy.

“He would always say, ‘Be happy,’” she said, “‘because if you feel happy, it will spread like the blood in your veins, it will magnify the spirit.’”

Smith and Kaye then performed the song “Ghost Dance” from the 1978 album “Easter.” Smith said she and Kaye wrote the haunting tune — with its refrain “We will live again” — specifically for the Hopi tribe but also as a message of “collective hope” for all people.

After the performance, a grateful de Blasio said, “Undoubtedly, one of the coolest things that has ever happened at New York City Hall.”

One person who has been encouraged by Smith’s example, and who was heartened by her words Monday, is Joseph Reiver, the executive director of the Elizabeth Street Garden. In September, the city notified the garden that it would be evicting it the next month, though so far has not taken action. Meanwhile, a lawsuit to save the unique, statue-festooned green space continues in court.

Reiver told The Village Sun, “I couldn’t think of a better person to receive the Key to New York City than Patti Smith. Listening to her acceptance speech reminded me of what a magical moment it was when she played at the garden back in September. That day was one of the truest New York moments I’ve ever experienced and it definitely inspired me to continue working to protect that which makes our city so special. It’s an honor to have Patti’s support in saving Elizabeth Street Garden.”