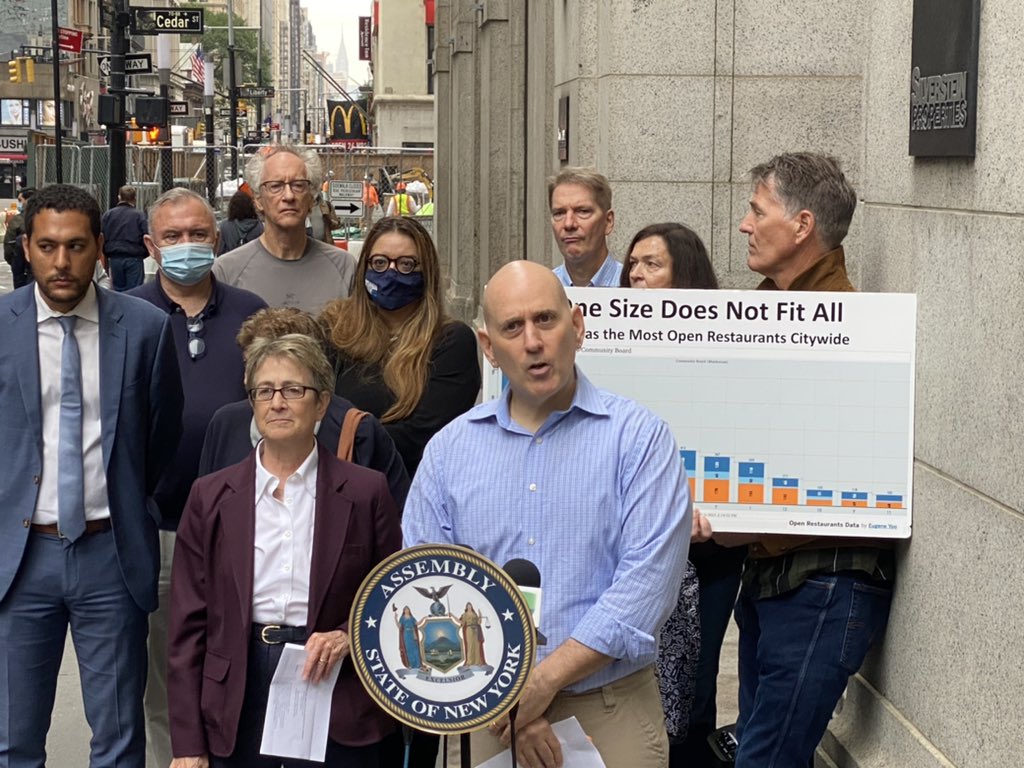 Assemblymembers Harvey Epstein, speaking at microphone, and Deborah Glick, to the left of him, were joined by Council District 1 candidate Christopher Marte, far left, and community board leaders and residents on Wednesday in calling on the City Planning Commission to reject the sweeping citywide zoning text amendment on sidewalk cafes and Open Restaurants. (Harvey Epstein / Twitter)

BY THE VILLAGE SUN | They just can’t stomach it.

A pair of local asssemblymembers stood with Downtown community board leaders, residents and activists on Wednesday to speak out against the city’s plan to overhaul the rules for sidewalk cafes and make roadbed sheds permanent.

Assemblymembers Deborah Glick and Harvey Epstein were joined outside 120 Broadway, the office of the Department of City Planning, by Jeannine Kiely and Tammy Meltzer, the respective chairpersons of Community Boards 2 and 1; Susan Stetzer, the district manager of C.B. 3; Christopher Marte, the Democratic candidate for City Council District 1; Leslie Clark of the West Village Residents Association and others to speak out against the Citywide Permanent Open Restaurants Text Amendment.

On Wednesday, the City Planning Commission heard public testimony on a zoning text amendment for permanent Open Restaurants, which would allow many restaurants to apply for sidewalk cafe space without local community board review, plus would also strip away existing zoning restrictions on where sidewalk cafes can be located.

Critics of the push to make Open Restaurants permanent charge that the novel program would negatively affect communities where restaurants and bars are already dense, plus would be “an unmanageable program.”

Currently, the Department of Transportation is overseeing the temporary program. Mayor de Blasio has not released plans for how enforcement would be handled under the text amendment to allow permanent Open Restaurants.

“We feel that ceding public space to one industry for commercial use that can only be enjoyed by those who can afford to use it, and without any community review or input, is just plain wrong,” Glick said. “While New Yorkers accepted the temporary measures during the worst parts of the pandemic in order to support restaurants which are vital to our economy, it is wrong to bypass local community review and give up public spaces which will be difficult to get back. I am opposed to this text amendment and call on the City Planning Commission to deny this measure. We must ensure that limitations which consider the public space use of our sidewalks and the interactions between restaurants and residents be upheld.”

“We want restaurants to thrive in New York and we want community members to be able to live peacefully in their neighborhoods,” Epstein said. “The two aren’t mutually exclusive. As written, the city’s Open Restaurants proposal, which is based on a program developed on an emergency basis, is not ready to be permanent. Until the city presents a community-backed plan to address the noise, garbage and accessibility concerns, the proposal cannot move forward. I urge the city to reevaluate its zoning text amendment in light of the recommendations from the affected communities.”

“In a city with nearly 9 million people and diverse neighborhoods, a one-size-fits-all approach does not work,” said Board 2 Chairperson Kiely. “C.B. 2 Manhattan has the most Open Restaurants citywide. This creates grave concerns for our local residents about noise, trash, rats, safety and accessibility, as well as the overwhelming density of open restaurants in our mixed-use residential neighborhoods.”

“The proposed text amendment will throw out years of residential zoning protections for our residents,” said C.B. 3 District Manager Stetzer. “One size does not fit all for New York City — Community Board 3 has 535 nonconforming lots — this will allow potentially hundreds of outdoor dining [locations] on sidewalks and streetbeds under our bedroom windows. Zoning is a balance between the public good and private property rights, but this proposed amendment does not balance or even consider residents and their needs — it pits our families and local restaurants against each other.

“Noise complaints from restaurants have gone up 87 percent since COVID, there are more rats, more garbage and a lot more noise. Our residents complain that nobody cares about them.

“The proposed amendment is completely lacking in details of the final plan and lacks guarantees that business applications will come before the community for recommendations,” Stetzer said. “We are being asked to vote for an amendment that is lacking in design and guidelines for sidewalk cafes and roadbed sheds.”

“Manhattan Community Board 1 voted in plurality to oppose this text amendment application,” said C.B. 1 Chairperson Meltzer. “This process is inherently flawed, as it forces community boards to vote on eliminating decades of time-tested zoning regulations, to replace it with a process that hasn’t yet been determined. City Planning and the Mayor’s Office are asking the public to have faith they will figure out the program framework and how to enforce the rules, but they have not been able to demonstrate this with any type of consistency during the temporary program which is extended until at least 2022.

“C.B. 1 is extremely troubled by the voluminous concerns raised including, but not limited to: accessibility, equity, inclusion, privatization of the public realm, resilience measures, climate-change solutions, support of small businesses, extended sidewalks, green streets and public art that have gone unanswered with this proposal. Planning changes of this scale should have started on the community level for maximum public engagement, instead of with lobbyists behind closed doors.

“Further,” Meltzer continued, “C.B. 1 believes this application is being rushed forward with untoward urgency without enough merit or engagement with the public regarding the use of public space. We urge the City Planning to take community feedback under careful consideration. Removing large swaths of zoning is a drastic measure, and we must be certain about what will replace it before moving forward.”

“Permanent Open Restaurants and the rezoning text amendments are predatory solutions looking for a nonexistent, privileged problem,” said Shannon Phipps of the Berry Street Alliance in Williamsburg, Brooklyn. “Privatizing public space used by 8 million citizens for one industry’s benefit is a permanent sacrifice of residential life and business diversity — a forever commitment to hardships, unlivable and unenforceable conditions. #sunsetthesheds.”

“While allowing outdoor dining as an emergency measure to aid struggling restaurants was welcome, making the program broadly permanent is not advisable or desirable in too many locations,” said Andrew Berman, executive director of Village Preservation. “The mayor’s plan is lacking in the details and elements needed to ensure that these outdoor eating and drinking structures don’t conflict with residential uses, do leave adequate space for pedestrians, don’t become eyesores, don’t become safety hazards and don’t violate historic preservation regulations. This plan needs to go back to the drawing board.”

“On behalf of Moving Forward Unidos, we are dismayed at the lack of process of giving our city streets to one industry permanently,” said Nancy Preston and Katherine O’Sullivan of Moving Forward Unidos. “As the city exists today, there is a lack of enforcement of many rules and regulations, which were put in place so that all the citizenry may enjoy the city and the quiet enjoyment of their homes. Giving the regulation of Open Restaurants to the Department of Transportation, which has proved unable to regulate the emergency Open Restaurants is a big mistake.

“The move to give the liquor/nightlife industry our streets and sidewalks is rushed,” they said, “and does not take all resident, working, taxpaying New Yorkers into account.”