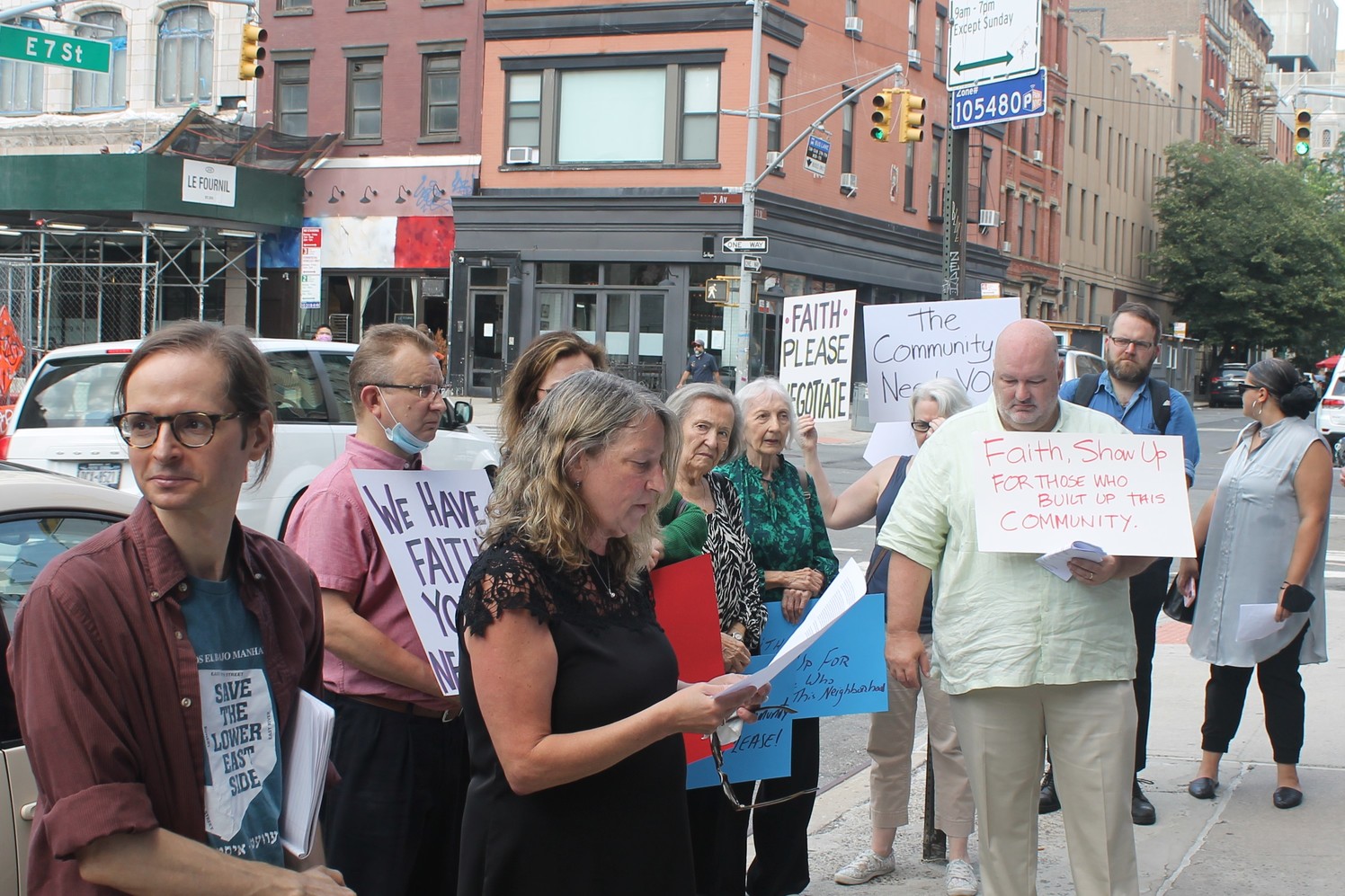 Catherine Barna, one of the displaced tenants, spoke at the rally about the pain of losing their longtime homes. Her husband, John, is to the left behind her. (Photo by The Village Sun)

BY LINCOLN ANDERSON | They’re hoping for a kernel of kindness from Popcorn.

Former tenants of 48 E. Seventh St., joined by Councilmember Carlina Rivera, the Cooper Square Committee, family members and community supporters, rallied on Second Ave. last week across from the rubble-strewn lot where their building once stood.

After two fires struck the corner building, the latter which led to its demolition, the East Villagers have been displaced for 17 months from their homes, where some of them had lived for 60 years.

For months they have reached out to their former landlord, Faith Popcorn, in hope that she could find apartments for them in one of the three other buildings she owns nearby. But, so far, Popcorn has not been open to talking with them.

Popcorn a.k.a. Faith Plotkin is more well known as a prominent “futurist” marketing consultant. Her Web site describes her as “America’s foremost trend expert.” Forbes magazine dubbed her the “Nostradamus of Marketing.”

A six-alarm fire last December totally destroyed the empty building and also spread to and gutted the historic Middle Collegiate Church next door. A previous fire in February 2020 — just days before the start of the pandemic — had already displaced the 48 E. Seventh St. tenants. But they had been reassured that, after repairs and a renovation that would take about a year, they would be able to return to their homes by this fall. Then the second and worse fire hit.

Some of the displaced tenants have deep roots in the community. They include senior citizens who had lived in the building for six decades or more. One of them ran Ray’s Candy Store when it was known as Andy’s Candy Store. Others, now middle-aged, had lived in the tenement for most of their lives and raised their families there.

They are mostly Eastern European, Ukrainian and some Polish, part of the East Village’s surviving Ukrainian community. They say they now just want to be “treated with dignity” while dealing with the tragic loss of their homes.

The destroyed building had eight apartments. Six units were home to Eastern European families and four of these housed long-term tenants. It’s the latter who are asking Popcorn for help, hoping she can find them affordable housing in their community.

For the seniors, especially, it’s vitally important to live in their beloved East Village among their support network of friends and near the community center connected to the Self Reliance NY Federal Credit Union. As the former tenants explained, every federal credit union is required to have an affiliated community center. They socialize at the center, eat meals and play bingo there and feel connected.

Speaking at the rally, Councilmember Rivera assured that she has the former tenants’ back and is working to try to help them.

“We are a long way from rebuilding together,” she said as the burned-out hulk of Middle Collegiate Church loomed behind them. “But I have faith in our community.

“Even basic questions about the building itself remain unanswered. … They don’t deserve this,” she said of the former tenants. “And no tenant in New York City deserves this.”

According to the Fire Department, both blazes were electrical and started in a restaurant space in 48 E. Seventh St. There were no findings of arson. Popcorn is apparently under no legal obligation to help the displaced tenants. But they are hoping she will.

Privately, some of the former tenants’ family members do say that two fires within one year seems pretty unlikely. But they note they want to work with Popcorn, so are not dwelling on that.

Popcorn did not respond to phone and e-mail requests for comment.

John Barna, who was born in Poland, grew up in the building and with his wife, Catherine, raised two children there. He said they had a rent-regulated apartment and were paying $600 a month rent when the first fire struck. They subsequently moved around the corner and found a place for $3,500 a month, which he renegotiated down to $3,400 during the pandemic. But that’s a lot of money for them.

Barna said he knows that Popcorn’s two buildings on E. Fifth St. have around 50 apartments, some of which may be open. He and others noted that Popcorn’s mother was previously the landlord of 48 E. Seventh St. and that, under her, there sometimes was no hot water and heat during winter. They would withhold rent until the services were restored.

Siblings Andrew and Marta Lopatynsky also grew up in 48 E. Seventh St., speaking Ukrainian at home, but now live in Queens and New Jersey, respectively. Their elderly parents, now in their 80s, were still living next to the church and paying $600 rent when the first fire broke out. They now are in Jersey near Marta and pay $3,200 in rent.

For around 20 years, their father, Oleh Andrew Lopatynsky, owned and ran Andy’s Candy Store, at Avenue A and Seventh St.

“We had Bob Dylan come into the store when he was nothing at that point,” Marta recalled. “He ordered an egg cream.”

Another vivid memory for her of that time was when “The Godfather” filmed in the East Village.

“It was Andy’s Candy Store — egg creams, milkshakes, comic books — and he sold it to Ray,” Andrew explained. “Ray walked in, he kept throwing money at my father. He finally sold it to him.”

Their dad then became a taxi driver, with Imus, the shock jock, a frequent fare. Both kids went on to New York University, with Andrew going into finance and Marta becoming an eye surgeon.

Their father now has dementia, all the more reason why he needs to be back in familiar surroundings among friends, Marta said.

One of the other apartments at 48 E. Seventh St. was occupied by Marta and Andrew’s aunt, who also hopes to return to the neighborhood. Another unit was filled by the Worochs, a mother and daughter, though it’s not clear if they are looking to return to Alphabet City.

Bohdan Kurczak, the president and C.E.O. of Self Reliance NY Federal Credit Union, said the fire-displaced tenants were part of the immigrant community that, after World War II, helped build and sustain Ukrainian institutions and businesses in the East Village, like St. George’s Church and St. George’s Academy, the credit union, the Ukrainian Museum and local butcher shops.

Some of the former tenants were displaced by the war and now find themselves displaced once again, Kurczak noted. They deserve to be able to enjoy their “golden years” in the community they helped build, he said.

“I strongly urge that these tenants of 48 E. Seventh St. not be ignored,” he said. “They contributed so much to this East Village. Let’s get them back where they belong.”

“The tenants want to get to the meeting table [with Popcorn],” he said. “It goes beyond having a roof over your head. This is the community that they built up.”