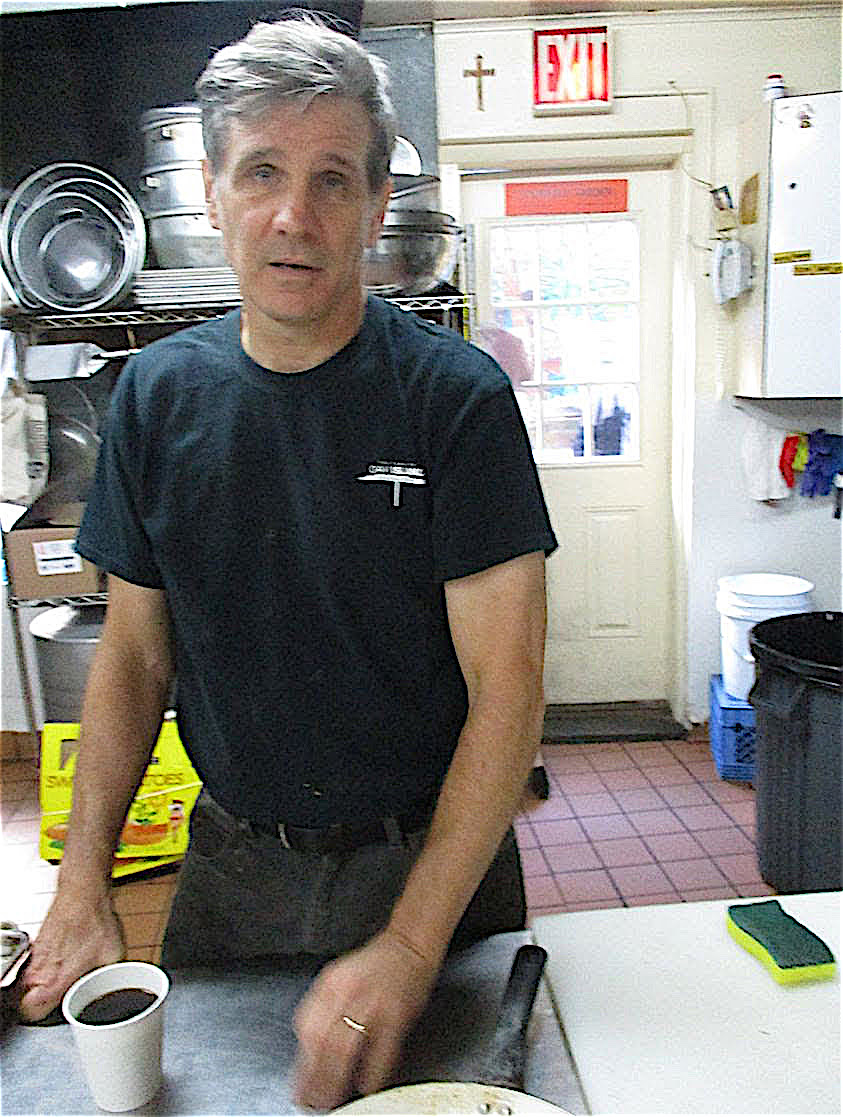 BY MARY REINHOLZ | Updated Fri., Dec. 18, 3 a.m.: Prominent East Village pacifist Carmen Trotta, a Catholic Worker volunteer who opposed the war in Iraq and led a march on Washington, D.C., against the war on terror in 2002, was scheduled to report to a federal prison camp Monday for his actions during a 2018 anti-nuke protest in Georgia, according  to one of his lawyers.

Spending time behind bars is nothing new for the energetic 58-year-old Trotta, who has been busted and sent to varied slammers so many times over the years that he can’t remember the exact number.

In a recent interview while still a free man, he told The Village Sun that most of his arrests were for misdemeanor acts of nonviolent civil disobedience under the aegis of a group he cofounded called Witness Against Torture. Members, many dressed in orange jumpsuits and black hoods, railed about the suicides and abuse suffered by inmates held indefinitely without trial as  U.S. enemy combatants at the Navy’s detention camp in Guantanamo Bay, Cuba, otherwise known as Gitmo.

“Twelve days, that’s the longest I spent for Guantanamo,” said Trotta,  at St. Joseph’s House of Hospitality, a graffiti-splashed, five-story Catholic Worker residence and soup kitchen at 36 E. First St. The house was established by Christian anarchist Dorothy Day in 1936. Three years earlier, Day cofounded the Catholic Worker movement and she is now being considered for sainthood by the Catholic Church.

Trotta, a bachelor who wears his late father’s wedding ring, seems pretty saintly himself. He spoke with this reporter while preparing lunch for hungry people about to arrive at the red brick C.W. outpost, among them a homeless man asleep outside under a blanket. Trotta has lived at St. Joe’s for 30 years and practices voluntary poverty, claiming with a smile, “I don’t lack for anything.”

But Trotta also admitted to moments of serious anxiety last week as he prepared to enter the low-security federal prison camp at the Otisville Correctional Facility in Orange County during a rise in COVID-19 cases in jails. He’s there now after his first arrest on felony charges, serving a 14-month sentence for participating in an April 4, 2018, protest at the Kings Bay submarine base in southeast Georgia with six other Catholic peaceniks, one of them an elderly Jesuit priest.

All of them acted as members of the controversial Plowshares movement, formed in 1980  by famed antiwar Jesuit priest Daniel Berrigan and his brother Philip Berrigan. The movement they founded 40 years ago takes its message from the prophet Isaiah, who predicted that nations “shall beat their swords into plowshares and their spears into pruning hooks.”

Under cover of darkness, Trotta joined six other religiously inspired activists who broke into the military installation with bolt cutters and conducted a “symbolic disarmament” on the 50th anniversary of Martin Luther King Jr.’s assassination.

They prayed and separated into three groups, spray-painting peace messages like “Love One Another” and smearing baby bottles of their own blood on sites of the Navy’s East Coast home to six Ohio-class submarines. The subs are equipped with Trident ballistic nuclear missiles that critics claim can deliver enough firepower to decimate the planet.

Trotta and his comrades, known as the Kings Bay Plowshares 7, were discovered, detained and transported to a Camden County jail after what appeared to be a major security breach.

Asked how he justified raiding the base and defacing government property —actions he acknowledged that Dorothy Day would not want associated with the Catholic Worker movement — Trotta, who pleaded not guilty to the charges, said he was acting out of his religious beliefs.

“I think these places are outrageous to God,” he stated intently at St. Joe’s. “I genuinely believe they are part of a genocidal criminal conspiracy that could destroy the nation.”

Trotta said later in a phone interview that he and his codefendants spent about a year considering nuclear facilities to target for a protest and concluded that Kings Bay “could be a no better place” to expose the horrors of a potential nuclear holocaust in the U.S. He believes that one-fourth of America’s nuclear arsenal is deployed at this home port of the Navy’s Atlantic submarine fleet.

“If there is a serious nuclear exchange [with Russia], it’s  the first place they would go,” he predicted. “The Russians would knock out all [Kings Bay’s] missiles before they could fire them.”

Kings Bay spokesperson Scott Bassett said the base does not confirm or deny the presence of nuclear weapons on its sprawling 17,000-acre installation. But he acknowledged that Ohio-class submarines when carrying Trident D5 ballistic nuclear weapons were “capable” of inflicting massive damage on targets.

Bassett said Kings Bay was commissioned in 1978 during the administration of President Jimmy Carter, Democrat of Georgia. The base was built in the 1980s.

“Our mission is to support the nation’s policy of strategic deterrence,” he said, adding, “We also do a lot of repairs to submarines.”

Bassett noted there is only one other Navy submarine base with a similar mission, in Bangor, Washington.

The Bangor submarine facility spurred a Plowshares protest in 2013 by a nun, 84-year-old Sister Anne Montgomery, a social worker and two priests.

One of those priests was Jesuit Steve Kelly, then 61. Kelly was indicted again five years later for his participation in the Kings Bay action with the six other Catholic militants. They were unanimously convicted by a jury trial on Oct. 25, 2019, of three felonies: conspiracy, destruction of government property and depredation of property — plus one misdemeanor count for trespassing.

Besides Trotta and Kelly, the defendants include Martha Hennessy, 65, a granddaughter of Dorothy Day, and Elizabeth McAllister, 80, a former Catholic nun and widow of the aforementioned former Catholic priest Philip Berrigan, cofounder of the Plowshares movement.

During pretrial hearings in Brunswick, Georgia, U.S. District Judge Lisa Godbey Wood said she would not allow the Kings Bay Plowshares 7 to argue their case to the jury by invoking a 1993 statute called the Religious Freedom Restoration Act. Under the R.F.R.A., the defendants could claim that government prosecutors were imposing a burden on their abilities to  practice their religious beliefs sincerely.

“We think she got that wrong but I believe the judge showed mercy to us,” Trotta said, apparently referring to reports that he and his fellow activists could have been hit with sentences up to 25 years each.

Trotta said he planned on immediately appealing for compassionate release upon his arrival at Otisville because of COVID19 cases spreading in the prison system. He hopes for a transfer to a halfway house or home confinement.

New York defense attorney Matt Daloisio, one of Trotta’s activist team of pro-bono lawyers, said he would also pursue getting 50 days knocked off Trotta’s sentence for the time he spent in a Georgia lockup after his arrest at King’s Bay, plus possibly more credit for good behavior and additional credit for his history of nonviolent protests.

“We also plan to fight the government on restitution —Carmen doesn’t have any  money,” added Daloisio. He was alluding to Judge Godbey Wood’s ruling that Trotta must pay his share of about $33,000 to cover the Navy’s cost for cleaning up the damage caused by the defendants at King’s Bay. Trotta is also subject to three years supervised probation after his release. He said he will be required to wear an ankle monitor.

Given all Trotta has suffered thus far, with serious challenges ahead, would he do another Plowshares protest after he leaves the Orange County joint?

“I really can’t answer that,” he said. “Everything occurs in a context. Who knows what will happen in a year or decade?”

In the meantime, he seems pleased that Pope Francis has condemned nuclear weapons and that there’s a renewed interest in anti-nuclear causes here and abroad. However, he believes that while Catholic Workers in America may support the Plowshares movement, “some are opposed” and the majority won’t participate in the group’s “non-Ghandian” style of protest.

One Catholic Worker volunteer at St. Joe’s  may not be counted out from connecting with the controversial actions of the Plowshares movement.

“I’m not thinking about it now, but I support [Plowshares] and might consider joining a protest,” said James Murphy, 48. A divorced former high school French teacher, he previously had been living in a Rochester C.W. shelter after his daughter graduated from college and is now one of 120 residents, mostly men, at St. Joe’s.

A Wall St. corporate banker in his younger days, Murphy said in a phone conversation that he hasn’t been close to Trotta. He noted that the pacifist leader “has been all wrapped up” in his legal issues and dividing his time between his case, his causes — which have included organizing a weekly vigil at Tompkins Square Park to protest the war in Yemen — and caring for his father in Long Island, who died this year at age 93. Trotta inherited his father’s car, which he turned over to the Catholic Worker community.

Even so, Murphy said Trotta’s forthcoming prison stint would leave a void at St. Joe’s “because he’s been here so long and provided so much stability. But we’ll hold down the fort.”