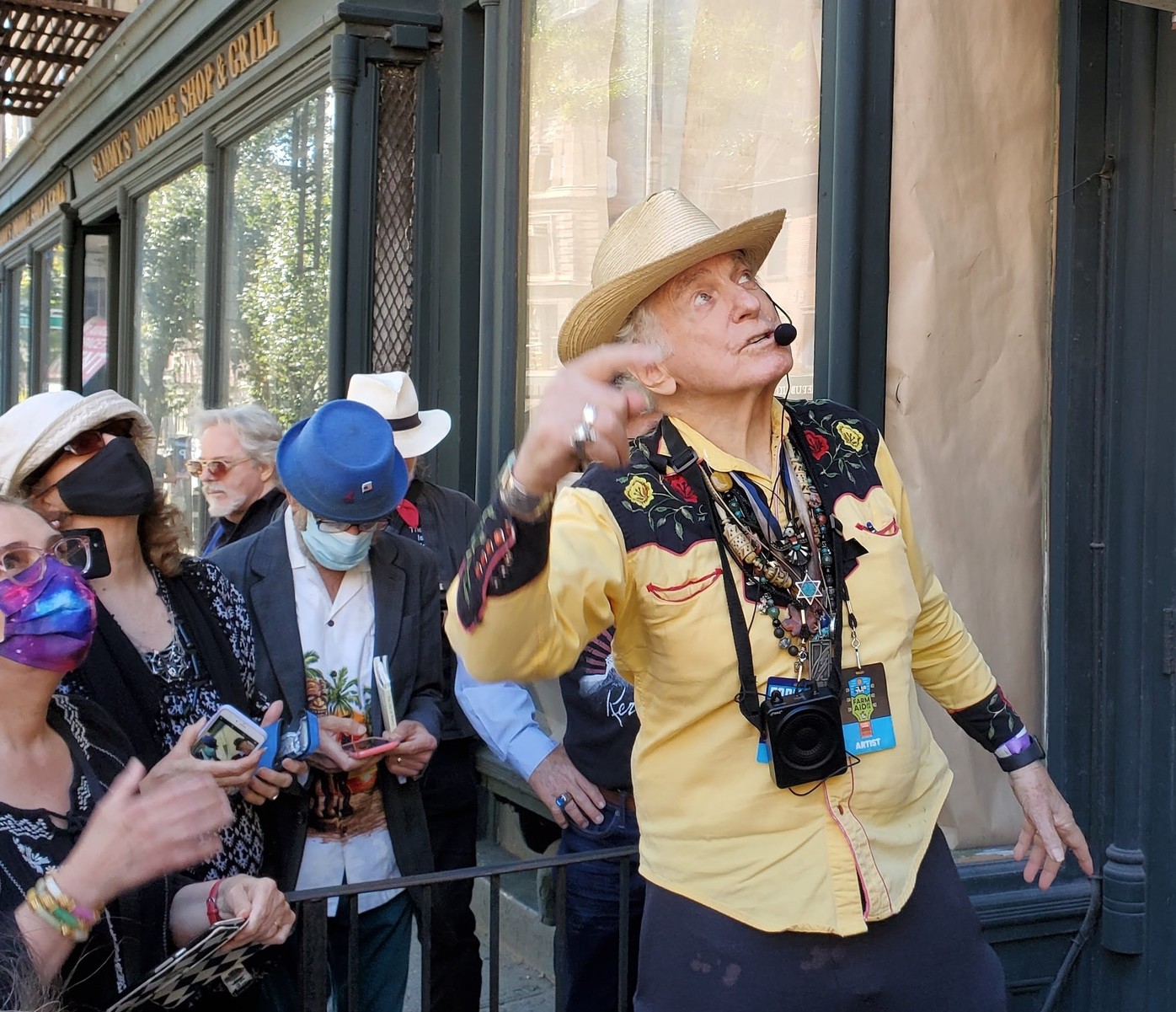 David Amram points up to where he used to live on Sixth Avenue around the corner from P.S. 41. (Photo by The Village Sun)

BY LINCOLN ANDERSON | As he rambled around his former Greenwich Village stomping ground of the 1950s and ’60s, David Amram lightheartedly scoffed that it was “the scholarly tour of Greenwich Village,” then made a snoring sound. But the crowd following him along was appreciative to be hearing history from a living legend.

Amram, a very spry 90, who was the official “artist emeritus” of The Village Trip festival, led a walking tour of his old Village haunts with the Beats, on Sun., Sept. 26, the fest’s final day.

Today, the multi-instrumental musician lives not far away in Beacon, N.Y. Sixty years ago he was in the thick of the Downtown arts and music scene during the heyday of the Beats and played jazz with the likes of Thelonious Monk.

Kicking off from the Washington Square Park Arch, Amram first led the group up to University Place and 10th Street, where his local, the Cedar Tavern, used to be. In the late 1950s and ’60s a mix of Beat writers and Abstract Expressionist painters, including both up-and-coming and veteran creative types, filled the place.

He sat on a folding chair that he used at some stops along the way, but he didn’t use it every time, often standing as he spoke.

“It’s all public domain,” Amram quipped, before launching into anecdotes about bygone days. “Nobody who could complain is around anymore.

“You could come in without any money and sit at a table with friends,” he recalled of the hot spot. “[Abstract Expressionist] Franz Kline was so nice to young people starting out trying to be something. … The waitresses were the stars. If they acknowledged you…’Hey, John!’…that was it.”

He noted that the Cedar Tavern clique, including artists Alice Neel and Larry Rivers and himself, all were in the Robert Frank movie “Pull My Daisy.” While Neel wasn’t widely known back then, Rivers had been a contestant on “The $64,000 Challenge” TV game show.

“Larry David said ‘Pull My Daisy,’ which was about nothing, was the model for ‘Seinfeld,'” Amram said.

He also read a bit at this stop from one of his autobiographies, “Offbeat: Collaborating With Kerouac,” specifically, a passage about the cafes and the bustling scene on nearby Eighth Street.

Closing the book, he urged the group, “Realize the good old days are now. Sixty-one years ago — has it changed so much?”

He added that, nowadays, “the Internet and YouTube and social media that everybody is complaining about” bring a virtual dimension to “getting together,” which is great, but that people can still seek out the real thing afterward, as well.

The next stop was W. 11th Street between Fifth and Sixth Avenues, the former site of a row of small midblock galleries where Amram would hang out and where he also helped pioneer a new genre, jazz-poetry, or poetry and spoken word accompanied by live jazz.

“Frank O’Hara was involved,” he noted of the poet, who worked at the Museum of Modern Art. “He brought the Uptown/Downtown connection.”

Amram added that hipsters would also hit art openings just to get a free drink, grinning, “I was guilty of that myself.”

“Small was, is and always will be beautiful,” he said of the intimate venues. “Sometimes small is good. It’ll stay good.”

Afer walking onward to the west just a bit, Amram paused on the sidewalk just north of the former Sammy’s Noodles restaurant on Sixth Avenue, and then pointed upstairs.

In fact, the true stars of the deli down the block from him were the owner, Art, and his wife, he said.

In March 1970, this neck of the Village was rocked when Weather Underground terrorists accidentally blew up their building on W. 11th Street a block away, he recalled. Amram asked Maria Passannate-Derr, a former chairperson of Community Board 2, who was photographing the tour, to say a few words. She grew up near the explosion site.

“There was no traffic here for months on end,” she recalled. “Police had a large sieve. They sieved all the rubble.”

Amram said that, back in the pre-Internet days when he lived in the neighborhood, the Jefferson Market Library was a mainstay of Village life. He noted that his friend Beat icon Jack Kerouac had given him a list of 54 books to read.

“There were ‘library rats,'” he recalled of people who logged hours in the Gothic-style building.

Rounding the corner onto W. 10th Street, he paused for a moment in front of Patchin Place, the gated cul-de-sac where poet E. E. Cummings used to live.

Next stop was outside the former Cornelia Street Cafe, whose stage Amram used to play. After 41 years in business, the cafe closed in January 2019, with Amram among those performing its last night. Its owner, Robin Hirsch, could no longer pay the astronomical rent — $33,000 a month. Today, the storefront still sits empty.

“That was the Cornelia Street Cafe, an amazing place,” Amram said. “Robin Hirsch was an amazing poet, writer, wine enthusiast. It was a wonderful place. Unfortunately, he didn’t buy it.”

Due to time constraints, the tour didn’t make it to two other spots Amram had hoped to swing by, former music venues the Village Vanguard on Bleecker Street and the Cafe Bohemia on Barrow Street. Today the Vanguard is still a music club, Le Poisson Rouge (LPR).

But the musician did walk down to MacDougal and Bleecker Streets, where he spun some tales about the famed former Village hangout Le Figaro Cafe.

Liz Thomson, The Village Trip’s founder, noted that Le Figaro Cafe is coming back under new ownership — it will reportedly just be called Figaro — and that she had hoped Amram would play there during the festival. But the cafe’s reopening, planned for the spring, was delayed. Thomson hopes Amram will play the reopening when it happens.

A few hours later, the indefatigable Amram was back onstage at The Bitter End for a classic folk hootenanny to close out the festival. Joining him for the “hoot,” were Christine Lavin, David Buskin, Robin Batteau, David Massengill, Hannah Reimann and Michele Temple.