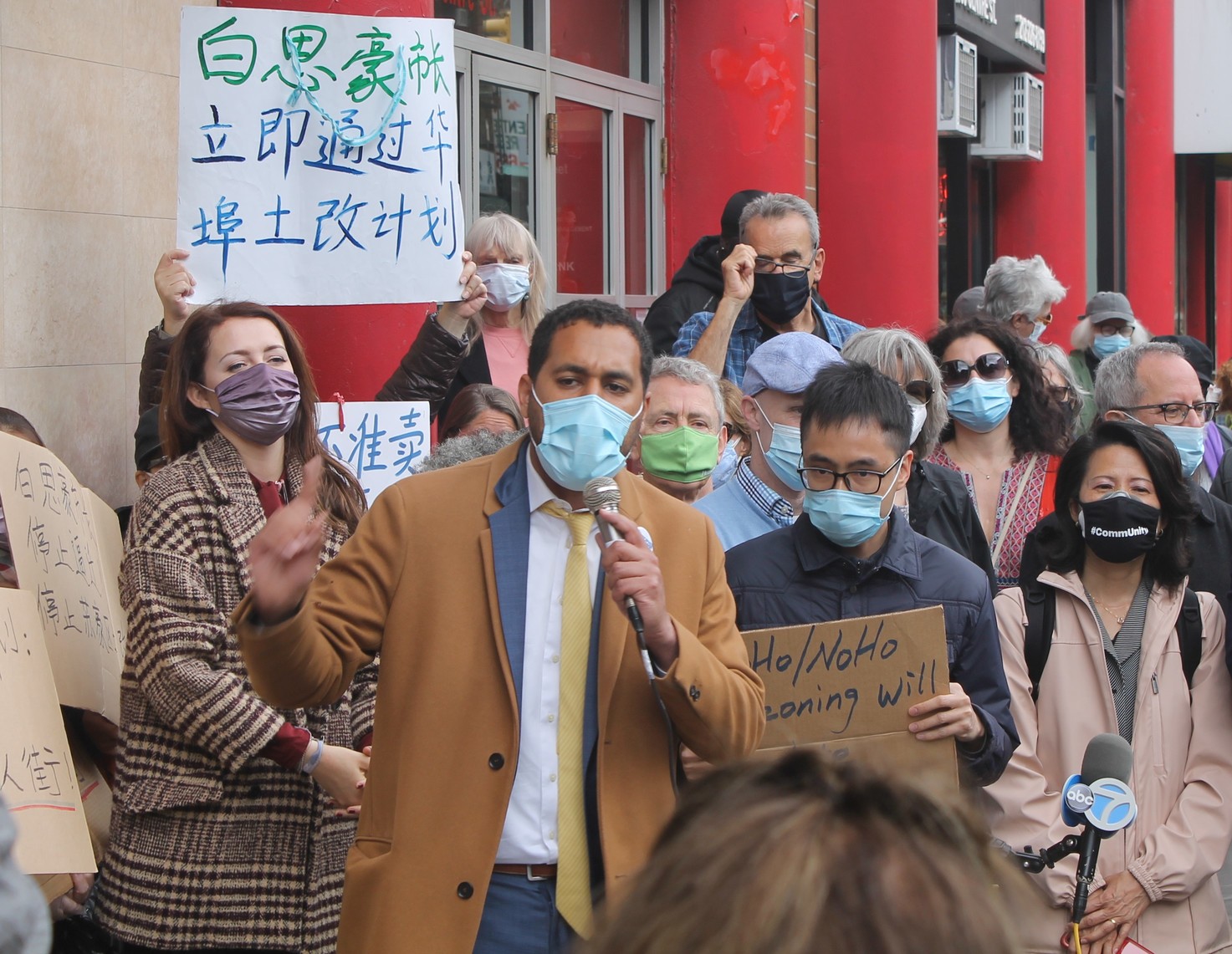 Christopher Marte speaking at a June rally against the Soho/Noho rezoning plan. (Photo by The Village Sun)

BY THE VILLAGE SUN | Like a Marvel Avengers version of District 1 politics, Lower Manhattan councilmembers past and likely future will unite — standing together, shoulder to shoulder — against the mayor’s Soho/Noho rezoning plan.

On Mon., Aug. 23, starting at 6 p.m., Manhattan Borough President Gale Brewer will be holding her virtual public hearing on the rezoning proposal. Following that, she will issue her advisory recommendation on or before Aug. 26.

Earlier on Aug. 23, at noon, the odds-on favorite to be the next District 1 councilmember, Christopher Marte, and two former councilmembers, Alan Gerson and Kathryn Freed, will gather for a press conference outside the borough president’s offices at the Municipal Building, at 1 Centre St., just north of Chambers St.

The three will urge Brewer to reject the plan. Community Board 2 has already gone on record overwhelmingly opposing the scheme.

Although the de Blasio administration has touted the rezoning as a way to increase affordable housing in Soho and Noho, opponents charge the plan is riddled with loopholes that would allow developers to skirt building any affordable units at all.

For the past 12 years, Margaret Chin has represented Council District 1, which includes Soho, Noho and Chinatown, which are all within the proposed rezoning area. Unlike Marte, Gerson and Freed, Chin — who will be term-limited out of office at the end of this year — supports the rezoning.

Marte won the Democratic primary election in June, and so is heavily favored to win the November general election in the solidly blue district.

Mayor de Blasio, now in the waning days of his final term, is trying to ram through the rezoning for the world-renowned, landmarked Downtown enclave, which has long been eagerly coveted by market-rate developers looking to cash in on its cool cachet. If approved, it would be the first upzoning ever allowed in a New York City designated historic district — whose buildings are all landmarked — which would set a dangerous precedent, the opponents warn.

Responding to the opponents’ incessant and rigorously researched critiques of the plan, Councilmembers Chin and Carlina Rivera, who represents District 2, recently declared that the Department of City Planning must guarantee that the rezoning would actually create affordable housing, plus preserve existing affordable housing.

But the opponents say the two councilmembers’ 11th-hour alarm is too little and way too late and shows just how rushed and ill-considered the current process is. They say the slapdash rezoning is deeply flawed and should be scrapped and left to the new City Council, which will include Marte, to reconsider in a more rational manner.

The opponents — including Village Preservation, which has done much of the research — charge that, as currently planned, the rezoning would spark widespread demolition and actually displacement of low-income residents, especially in the Chinatown part of the rezoning area.