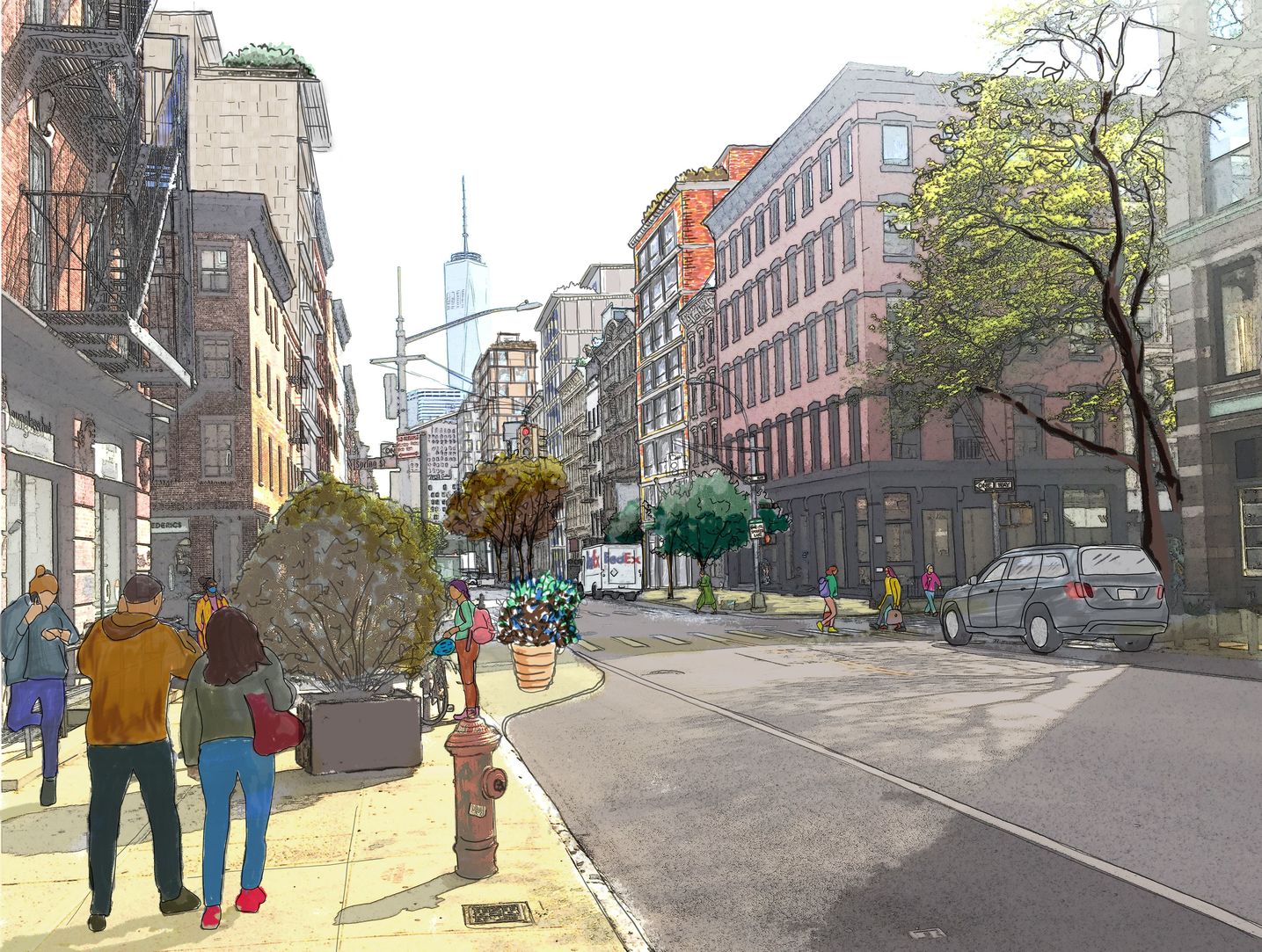 A drawing of West Broadway in Soho — though without construction cranes — from the city's Soho/Noho rezoning plan. (Dept. of City Planning)

BY LINCOLN ANDERSON | Updated May 19, 12:30 p.m.: The City Planning Commission on Tuesday announced the start of the public review for the Soho/Noho rezoning. The plan was officially certified, kicking off the city’s land-use review process, known as ULURP.

Village Preservation, the largest neighborhood preservation organization in New York City and largest membership organization in Greenwich Village, the East Village and Noho, promptly issued a defiant statement in response. Its director, Andrew Berman, blasted the rezoning as “a massive giveaway” to developers salivating to strike it rich in their coveted holy grail — the world-renowned, cachet-laden Downtown enclaves of Soho and Noho.

According to the city, the scheme, which it calls the Soho/Noho Neighborhood Plan, would allow as many as 3,500 new homes to be created, 900 of which would be permanently affordable under the city’s Mandatory Inclusionary Housing (MIH) program.

Outside of the Soho and Noho historic districts and along Canal St. and the Bowery, the plan calls for “Opportunity Areas” that would allow increased density and a maximum height of 275 feet, “which is appropriate to the existing context,” according to City Planning.

The proposed changes would cover an area generally bounded by Canal St. to the south, Houston St. and Astor Place to the north, Lafayette St. and the Bowery to the east, and Sixth Ave. and West Broadway to the west. The area’s unique zoning dates to the early 1970s, when vacant manufacturing buildings were repurposed by artists. About 85 percent of the proposed rezoning area is landmarked due to being included in historic districts.

“Every New Yorker should have the opportunity to live in transit-rich, amenity-filled neighborhoods like Soho and Noho,” said Marisa Lago, the chairperson of the City Planning Commission. “Built on years of community engagement, this proposal was crafted with a lens focused on fair housing, an equitable recovery from the COVID-19 pandemic, reinforcing Soho/Noho as a regional hub for jobs and commerce, and preserving and augmenting the arts. Through permanently affordable housing requirements and support for the arts, this plan is a giant step forward toward a more equitable and even livelier New York City.”

Under ULURP, Community Board 2 now has 60 days to review the proposal, after which it will go to Borough President Gale Brewer for her consideration, then back to the City Planning Commission and ultimately to the City Council for a binding vote. The process typically can take around seven months, which would just barely get under the wire before de Blasio is forced out of City Hall due to term limits.

But despite the city’s lofty rhetoric, preservationist Berman said the Soho/Noho rezoning is, at heart, a transparent payback for the mayor’s deep-pocketed developer pals.

“Wrapped in a false veneer of affordable housing and social-justice equity,” Berman said, “de Blasio’s Soho/Noho proposal is a fire-sale giveaway of enormously valuable real estate that will destroy hundreds of units of existing affordable housing and create few if any new ones; displace hundreds of lower-income residents and residents of color; make these neighborhoods richer, more expensive and less diverse than they are now; and destroy locally and nationally recognized historic neighborhoods while pushing out the remaining independent small businesses with a flood of big-box chain retail. It’s a classic de Blasio bait and switch, and one has to wonder, after seven-and-a-half years of seeing this mayor in action, who is naive or desperate enough to not see it for what it is?”

The group’s study also found that the Soho/Noho plan only accounts for about 37 percent of the 10.3 million square feet of new development potential it would create (nearly four Empire State Buildings’ worth), thus “hiding millions of square feet of additional development likely to take place that will almost undoubtedly take the form of luxury condos, big-box chain retail, and high-end commercial office space with no affordable housing.”

Earlier this month, the Soho Alliance, Broadway Residents Coalition and individual plaintiffs filed a lawsuit to block the rezoning plan’s certification, but the city, at the last minute, delayed the certification. As a result, state Supreme Court Justice Arthur Engoron ruled that he could not issue an injunction yet. He set a return court date of June 3, likely figuring the city would have certified the plan before then.

Last Friday and this Monday, the plaintiffs returned to court to try to block the certification once again and the judge denied them again. But that does not mean, as has been incorrectly reported by some media outlets, that the lawsuit was tossed out of court, noted Sean Sweeney, the director of the Soho Alliance. Sweeney paraphrased their attorney, who related Engoron’s latest response:

“The judge said, ‘Look, I’ll give a T.R.O. [temporary restraining order] if the bulldozers are coming in to destroy a building. But I’m not going to give an emergency T.R.O. for a process [ULURP] that will last seventh months.”

Engoron, however, said that the issue of an emergency T.R.O. would be discussed during the return court date of June 3.

The lawsuit argues that public in-person meetings, not Zoom virtual meetings, are required under ULURP and also that the city did not make sufficient information about the plan available to Community Board 2 the required 30 days before the certification.

According to Sweeney, C.B. 2 was only sent a couple of sentences notifying the board that the certification was planned. That’s insufficient under a referendum to the City Charter that voters approved in 2019, he noted. Meanwhile, the Soho/Noho rezoning plan is a massive document.

“One appendix [for the rezoning] has 13,000 pages, so how can the community board, let alone the public, review a long, long attachment?” the Soho activist asked, incredulously.

Sweeney said the plaintiffs are happy that Justice Engoron is on the case. He noted that Engoron previously ruled in favor of community lawsuits against putting a private restaurant inside the Union Square Park pavilion and the Two Bridges multi-high-rise tower project.

“The Union Square and the towers are giving us great hope,” he said. “We have someone on the bench who understands the community’s position.”

David Gruber, a former C.B. 2 chairperson who is a zoning specialist, was dismayed that the mayor is determined to push ahead with the embattled rezoning effort at this late hour.

“This is Trumpian,” he scoffed. “He shouldn’t be doing this as a lame-duck mayor. De Blasio should not be doing this or making the [Open Restaurants program] sidewalk sheds permanent. It should be left to the next administration.”