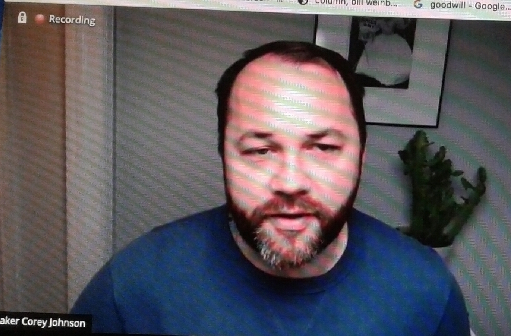 City Council Speaker Corey Johnson said he's been getting complaints from Westbeth and West Village Houses residents about a lack of social distancing in Hudson River Park and joggers running without masks. (Photo by The Village Sun)

BY LINCOLN ANDERSON | Soho may be off the table for the city’s open streets program, but Community Board 2 last Thursday O.K.’d nine streets elsewhere — mainly in the Central Village and West Village, plus one in the Meatpacking District — as candidates for the new initiative.

Ultimately, though, only a few of the streets are likely to be chosen for the program.

Three days earlier, the C.B. 2 Traffic and Transportation Committee had bowed to pressure from outraged Soho residents, who fought to keep Broadway, West Broadway and Prince and Mercer Sts. out of the program. Locals had flooded the committee with 150 letters against the idea and then turned out in force, “packing” the Zoom virtual meeting.

Speaking at the time, Shirley Secunda, the committee’s chairperson, said C.B. 2 did not want to force open streets onto a community that did not want them.

The open streets program was pushed hard by Speaker Corey Johnson and Councilmember Carlina Rivera, over Mayor de Blasio’s hesitation, after Johnson threatened to get the governor to back the plan.

The sticking point had been whether police were needed to provide security for the program. But an agreement with the mayor was reached under which “community partners” — such as business improvement districts — are supposed to play that role.

The initial aim is to create 40 miles of streets citywide for people to get outside while safely social distancing — with a goal of eventually boosting that to 100 miles.

The program is billed as temporary. But many Soho residents worried it would have been a Trojan horse to create permanent pedestrian malls to attract even more shoppers and tourists to the area. There was also fear that people using the open streets would not wear face masks, putting older and immunocompromised Soho residents at risk.

“On sunny days I just stay home because it’s not worth the stress,” board member Georgia Silvera Seamans said. To keep 6 feet away from people, she said, “You have to step off the sidewalk or do some kind of dance.”

Samir Lavingia, a Google software designer living in the West Village, has been advocating strongly for the open streets program at the C.B. 2 meetings. Pointing to the need for more car-free space right now, he said his girlfriend was jogging when she rolled her ankle while hopping up and down from the sidewalk to the street trying to do social distancing.

However, Rocio Sanz, a Board 2 member who owns Tio Pepe restaurant on W. Fourth St., was skeptical the measure is needed.

“There is very little traffic in the Village right now,” she scoffed.

David Gruber, a former board chairperson likes the idea of more space for pedestrians — but not for bikes.

“I don’t want it to be a bike highway,” he stressed of the open streets. “I like the idea of kids learning to ride their bikes there. But I don’t want to see bikes everywhere, that’s going to ruin it for pedestrians, and it’s not going to be good for seniors.”

Gruber also said open streets in the Village won’t just be used by locals, even though other neighborhoods around the city will have their own open streets.

“We will be a destination,” he said, noting how the Village’s restaurants are always a big draw.

In addition, Gruber said he’d like to see Soho have some open streets of its own, feeling that all parts of Board 2 should have their fair share.

Some of these, like MacDougal St. and University Place, are next to parks, which is one of the program’s main criteria — to relieve pressure on overcrowded parks.

However, it’s the city that will ultimately pick which streets go into the program. Ritu Chattree, a Traffic and Transportation Committee member, added that only a few of the streets the board suggests will be chosen since each district will get only a limited number of open streets.

“This is an iterative process,” she said. “These are just suggestions, most of which will be discarded. Our resolution itself says the list is preliminary.”

The discussion of the open streets — specifically, “additions” to the C.B. 2 list — will continue at this month’s Traffic and Transportation Committee meeting on Thurs., May 7.

For its part, Board 2 supports a so-called “shared streets” model, under which the street is partially closed to vehicles while pedestrians are given priority; meanwhile, vehicle access is allowed at 5 miles per hour for first responders, deliveries, sanitation, Access-a-Ride and other essential services, plus local residents’ vehicles.

C.B. 2 also favors — as the City Council also reportedly does — the idea of closing at least one lane on a street to vehicle traffic to extend the sidewalk space from the curb.

The city kicked off the program last Friday — pushing up the planned start a few days — closing 7 miles of streets, including roads inside parks, to cars. None were in Downtown Manhattan.

Johnson and Rivera virtually attended last Thursday’s C.B. 2 meeting, reporting on what they’ve been working on, and answering questions about the open streets.

C.B. 2 Chairperson Carter Booth asked Rivera what exactly “temporary” means in regard to the open streets.

“The bill says it’s for the duration of the crisis,” she said, “and there will be a review in a month or so. … It can be like a pilot program,” she noted.

Rivera added the program could also be used to help restaurants put tables out on the street once businesses reopen.

“Can this be a solution for our restaurants — to be like al fresco dining?” she offered.

Booth later asked if it was the Soho Broadway Initiative, a BID, that had previously pushed for Broadway and other Soho streets to be open streets. Janet Liff, a Traffic and Transportation Committee member, denied that. Liff is a board member of Transportation Alternatives and chairperson of TransAlt’s Manhattan Committee.

Speaking to the need for open streets, there was also a lot of discussion about crowding in Hudson River Park, as well as on the adjacent bike path.

Robin Rothstein, another board member, said she’s been cycling a lot on the bike path lately for exercise during the lockdown, but finding it very crowded, especially at certain narrow pinch points. Johnson said open streets could help relieve the pressure on the river bike path.

“I’ve been getting complaints from Westbeth and the West Village Houses about the park being crowded and joggers running without masks and no chance for social distancing,” he said. “Before the pandemic hit, it was the busiest greenway in America. Now with the pandemic in effect, it is way busier than it was before.”

It was noted that Tony Simone, external affairs director for the Hudson River Park Friends, sent the board a letter expressing the group’s support for open streets.

“We are seeing unprecedented pressure on our parks and open spaces,” the letter stated.

The Friends are advocating for making both Washington and Greenwich Sts. open streets, and even closing a southbound lane of the West Side Highway to vehicle traffic to give people more open space.

This past weekend, tickets were being issued in parks for groups not social distancing. The mayor reportedly told Police Commissioner Dermot Shea to send officers to Hudson River Park after complaints there of crowding.

“If you choose to run, it’s not just 6 feet, it’s 12 to 20 feet behind you,” she said of the virus-packed droplet clouds that maskless joggers potentially are spewing in their wake. “It’s selfish and reckless,” she said.

Meanwhile, some runners say people’s yelling at them to don masks is harshing their fitness routine, but that it’s probably just generalized anxiety about the pandemic.

Obviously, it’s much easier to catch the virus in enclosed spaces and through prolonged contact, which is why the main way it spreads is through families. But people don’t want to take chances with this potentially deadly disease.

Glick also said the greenway needs to be widened to alleviate the crowding.

Katy Bordonaro, a C.B. 2 member who is immunocompromised, voiced her alarm at seeing so many CitiBike riders without masks. She said she’d like to see signs posted prominently at bike-share docks telling cyclists to wear them, in accordance with New York law under Governor Cuomo’s executive order.

Glick noted the mayor has stated he doesn’t want to ticket people for not wearing masks, but now it’s time for some enforcement already.

“I do think,” she said, “it’s reached the point where you’ve had two months to figure it out, Jack, and it’s time to come down with the hammer.”